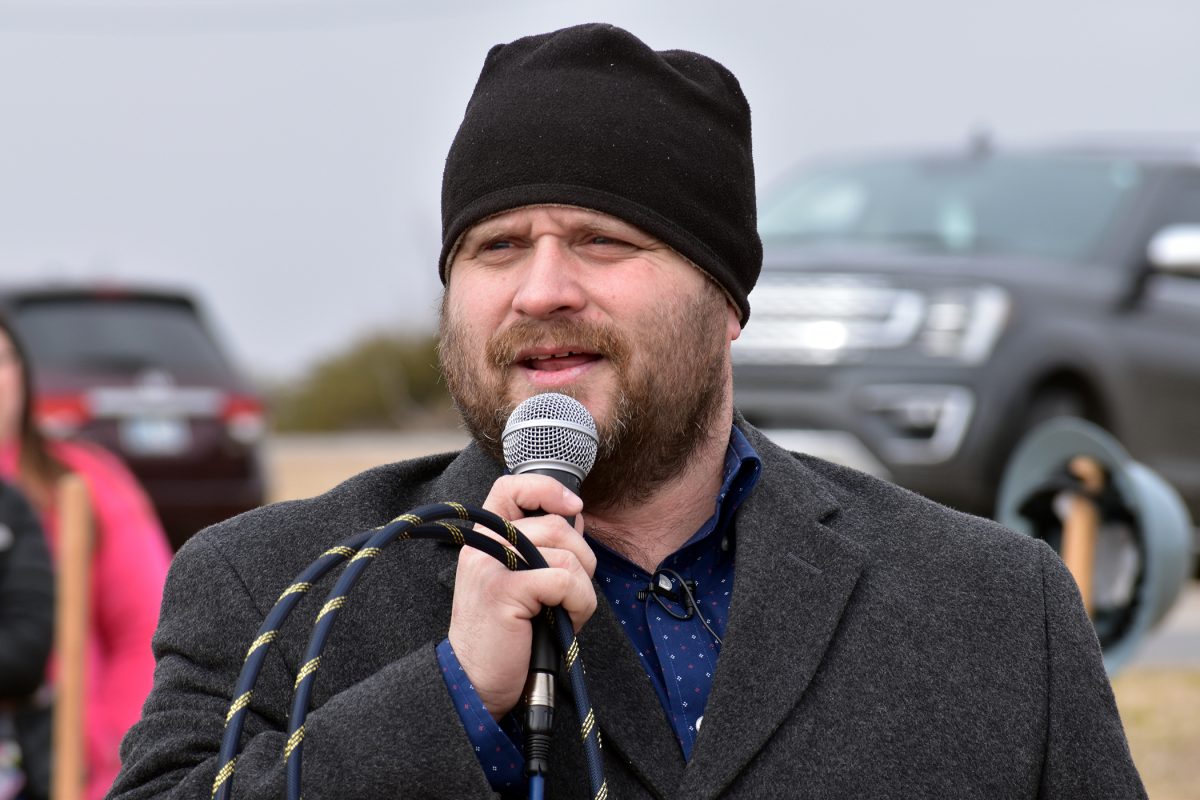 Yukon’s Trinity Baptist Church celebrated a milestone in its community outreach efforts Sunday, as parishioners gathered for a groundbreaking of Together We Center, a development aimed at helping those who need it the most.

Mustang Mayor-Elect Brian Grider will head the new center as its executive director and was a driving force in spearheading the Together We Center project, Trinity senior pastor Brian Mills said during a brief ceremony to commemorate the groundbreaking.

The center will be located on the church’s 30-acre site, located in the 600 block of North Cemetery Road. It’s a chance for Trinity to expand its weekly free medical clinic and will also provide a community food pantry and clothing closet – just to start, Grider said in October.

“We have five acres on each side of our main campus, and we’ve been thinking for some time about how we’d like to do something to help the greater community at large,” he said. “This was the first phase we determined would be the best use of our resources – and it’s certainly not something just for Yukon, as we have members from all over the county and beyond.
We want to be a source of support for everyone who needs us,” Grider said.

Trinity has operated its faith clinic for about five years, focusing on helping those who do not have health insurance, Grider said. Together We Center’s first phase was also expected to include a new food pantry encompassing about 2,000 square feet of the new building, while a clothing closet – envisioned as something like Dress for Success, aimed at assisting individuals who need appropriate apparel for work and/or job searches – would take up about another 1,000 square feet of the facility, he said at that time.

Initially, the project was broken into three phases – the second would include a community center offering everything from life skills and job interview guidance to classes like cooking and other things that might be in demand, Grider said. A third phase would feature a garage that offered services like oil changes and brake jobs for widows, single parents and others in need, he said.

“We want to encompass some of the things that are missing or not as easy to find – because there’s a huge need out there, although it might not seem readily obvious,” Grider said in October. “This is part of our larger mission at Trinity and our goal to do as much community outreach as possible.”

Fundraising for Together We Center has been so successful, however, the project would move forward at a much more accelerated pace than originally anticipated, with a tentative opening date expected for this August not only for the first phase but for more of the development planned for a later roll-out, Grider said Sunday.

“We did this, we did this together and you were a part of it,” Mills told a young parishioner shortly before the groundbreaking celebration formally began Sunday.
A longtime Trinity outreach pastor, Grider was tasked to take the helm of Together We Center as executive director; he would also remain working on some missions and community outreach beyond the new project, he said.

According to state statistics, almost 8% of Canadian County residents lived below the poverty line and 13% were uninsured; 40% of area students qualified for free and reduced lunch, and unemployment hovered at about 7% – and that was before the novel coronavirus pandemic first hit Oklahoma in March. Faith Clinic has averaged more than 690 patient visits annually during its five-year tenure, Grider said. The clinic not only serves Yukon residents, but also Mustang, El Reno and area Oklahoma City families who need its services; it is the only free medical clinic in Canadian County, Grider said.

Stan Lingo, a church elder and owner of Lingo Construction would handle the project, Grider said. The company currently serves as construction manager for ongoing work on the new Canadian County Fairgrounds. Grants and private donations would fund Together We Center, which officials estimated would initially be valued at about $1 million.