New details continue to emerge in the case of two people accused of killing a 42-year-old Oklahoma City man and leaving his car in his burning vehicle near Mustang. 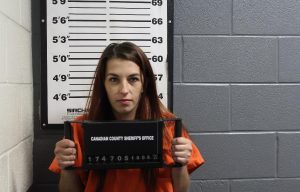 Johnathon Reese Erickson, 28, and Kristina Marie Franz, 27, both of Oklahoma City are both charged with first degree murder in connection with the October death of Richard Pierce.

Oklahoma City Police Department was called to a blaze near the intersection of SW 104th and Mustang Road, Oct. 4, where they found a car later determined to be owned by Pierce’s mother. The car and the body found inside, subsequently found to be Pierce, were burned beyond recognition, according to reports.

A probable cause filed in both cases shed light on how Franz and Erickson were apprehended for the alleged murder.

According to the probable cause affidavit filed by the court, a witness reported to police three individuals, including a man wearing a red bandana, left the area that night “at a high rate of speed.”

The vehicle driven by the alleged suspects was described as a 1980s era Ford LTD.

Investigators said vehicle was found on surveillance tape – as was the individual wearing the red bandana – at a location where Pierce’s mother’s VISA card was used to make purchases; the witness near the scene of the fire confirmed the car and person in the video were the same he saw after the alleged crime. 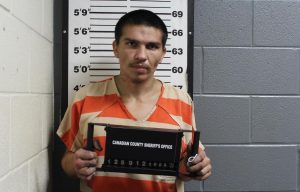 On Oct. 7, according to the affidavit, a police patrol found the vehicle, occupied by an as yet unnamed witness, which led to the identification of yet another witness, investigators said.
Those individuals allegedly identified Franz and Erickson as the individuals at the scene, the convenience store where the debit card was used and earlier at a motel with the victim.
Erickson would later say he helped “a girl” get rid of a car but did not say there was a body inside, investigators stated in the affidavit.

The pair were apprehended and arrested Oct. 7 at a northwest Oklahoma City apartment complex, officials said. After an initial booking at Oklahoma County Detention Center, both Erickson and Franz were booked Oct. 8 at Canadian County Jail, where they remain held without bail. While OKCPD officials said the two faced complaints of first degree murder, Canadian County Sheriff’s office records Monday indicated complaints against the pair were “accessory to murder.”

The defendants each face first degree murder charges; their cases remain pending, in part due to a COVID-19 diagnosis – in Franz’s case – and a potential exposure of Erickson, officials said Tuesday.

Both Franz and Reese have criminal records in Oklahoma, according to Oklahoma State Courts Network. Oklahoma County prosecutors in August charged Franz with felony drug possession with intent to distribute in a case that kept the Oklahoma City woman in that county’s jail on a warrant; she was released Sept. 29, records showed and next was scheduled to appear for a preliminary hearing Oct. 22.

Erickson also has a pending case in Oklahoma County, a misdemeanor methamphetamine and stolen property possession charge filed June 24. No hearings have yet been set in that matter, according to OSCN.

Erickson was also convicted in 2017 in Oklahoma County on felony domestic abuse, receiving a one-year suspended sentence. A Canadian County 2017 case filed as felony drug possession was amended to a misdemeanor and also resulted in a suspended sentence for the Oklahoma City man.