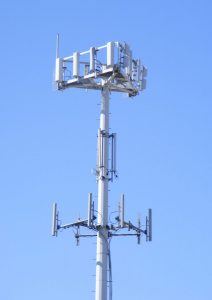 But it didn’t come without a struggle.

The telecommunications company requested a special use permit to construct a 110-foot cell tower at 600 N. Douglas Blvd. on property owned by Highland Park Baptist Church. The monopole cell tower will include a 10-foot lightning rod and associated equipment buildings.

City council members expressed frustration about the city’s lack of power in determining where cell towers are located within their municipal boundaries. That authority is granted to the federal government, which sets guidelines on where a cell tower can be built. Local governments can add requirements on the aesthetics and safety of the structures.

“Basically, whether we want to admit it or not, our hands are tied,” said Pat Byrne, Ward 2 Councilman, “Federal government has ruled that we have to allow this to happen. But the same ruling that the federal government made does allow us to put some restrictions on it.”

Byrne and councilwoman Españiola Bowen, whose Ward 3 includes the site of the planed tower, asked that the city include additional requirements that would limit the impact of the structure on neighboring residents.

A representative from Verizon agreed to the additional requirement. The council unanimously approved the special use permit.

Two members of the public spoke about the cell tower.

John Jones, pastor of Highland Park Baptist Church, said they are surprised by the negative feedback from residents about the cell tower.

“We did not expect the opposition that we’ve acquired in this effort,” he said. “We have been working on this process for about 18 months. In the process, we hired a lawyer to look through this contract and do it the right way.”

Jackie Parks, who lives next to the church property, said she is concerned about the safety of the tower and impact it has on the aesthetics of her property.

“I appreciate the pastor, but they’re probably only at the church a couple times a week, we’re there all the time,” she said.

She asked the council to consider creating a community board to provide input on future matters like this.

“I find it incomprehensible that we have citizens before us that have objection to the placement, and all we can say is ‘sorry there is nothing we can do’ because federal laws dictate that we have to accept in this location,” Eads said.

Several council members agreed with the sentiment. Byrne said the additional requirements included with this tower are the first steps in the right direction.