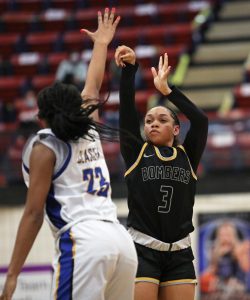 Blesseth Dillingham shoots a 3-pointer during a game at Moore High School. (Photo by Jeff Harrison)

The Midwest City girls basketball team is known for their defense.

But they are proving to be apt with the ball in their hands.

The No. 7-ranked Bombers topped the century mark scoring last Friday night, as they beat Enid on the road 101-50.

“We shared the ball very well and went inside and out,” said coach Megan Maloy. “Amber Guy was a big threat. Sophomore Myracle Washington and Latasha Mitchell both got hot at the 3-point line, and Kennedi Grant was great with second-chance points.”

Grant was again the high scorer with 13 points. Mitchell scored 8 points and Mya Brown and Guy had 7 points apiece.

Midwest City was on the road Tuesday against Putnam City North (after press time) and will host No. 4 Choctaw on Thursday night.