The Midwest City girls basketball team can be a disruptive force.

That was on display in the first half last Thursday night as they rattled Choctaw’s guards and scored transition baskets with ease.

But it was as different story in the second half.

Midwest City couldn’t find their shooting stroke, while Choctaw locked in on both ends of the court and cruised to a 56-42 win at J.E. Sutton Fieldhouse. 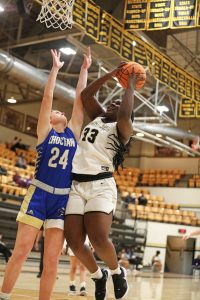 Choctaw coach Ryan Maloney said early foul trouble for Trinity Gooden and Raven Thomas threw a wrench into their game plan in the first half. With their two primary ballhandlers on the bench, Choctaw struggled to run their offense and had to move to a zone defense.

“We regrouped at halftime, stayed in our man defense, didn’t foul and got to do what we planned on,” Maloney said. “Defensively, we focused on Kennedi Grant and kept them in the half court.”

After leading 24-22 at halftime, the Bombers didn’t score again until nearly halfway through the third.   Taniyah Looney finally snapped the drought with an offensive putback.

Meanwhile, the Yellowjackets opened the third quarter on a 17-2 run. Carley Gassaway hit two 3-pointers and Raven Jackson and Daezi Miller each hit one to give the visitors a 42-33 lead after three.

Choctaw extended its lead to double digits in the fourth quarter.

Midwest City coach Megan Maloy was not pleased with her team’s performance in the second half.

“We came out flat in the second half and Choctaw was playing stronger than ever,” she said. “We can’t do that against a great team like that. Hopefully we can learn from these mistakes because we’ll see them again soon.”

Grant led the Bombers with 16 points including a pair of 3-pointers. Looney finished with 10 points – all in the second half.

Gasaway led the Jacket with 13 points and Gooden had 12.

Midwest City and Choctaw will have a rematch Friday at Choctaw High School. Tipoff is set for 5 p.m.