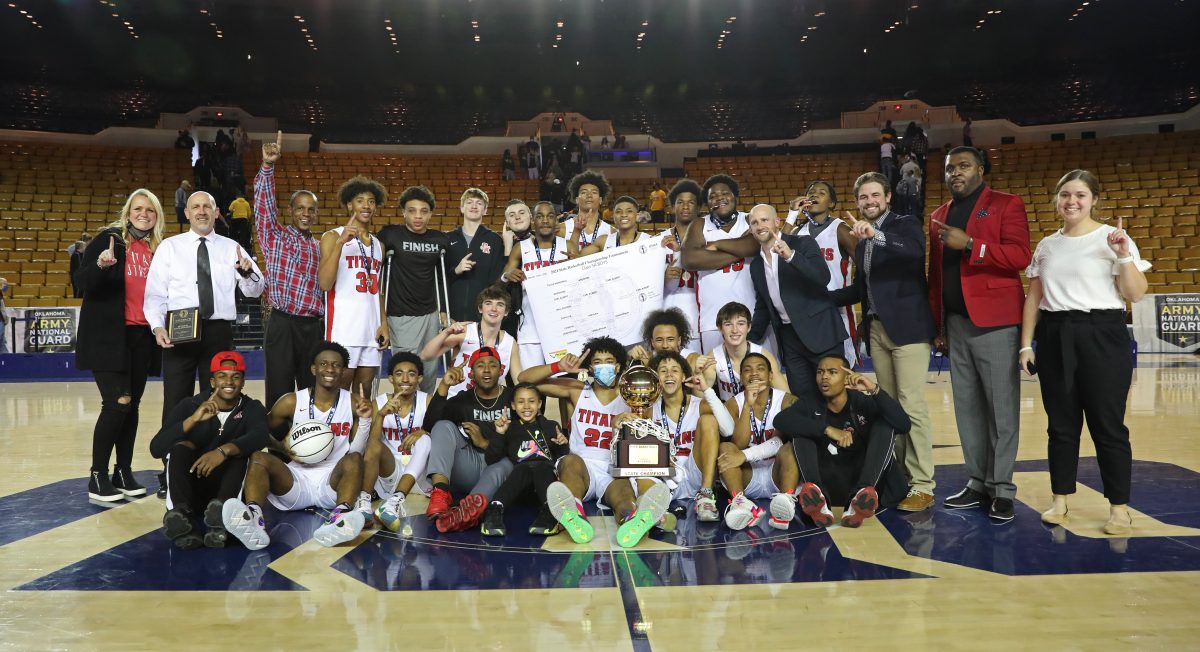 TULSA – The Carl Albert boys have quietly been the team to beat in Class 5A this season.

And they made sure it never happened.

The No. 1-ranked Titans capped a stellar season by throttling No. 3 Lawton MacArthur 72-49 in the state finals Saturday afternoon at the Mabee Center. Carl Albert controlled the game from opening tip, leading by double digits for much of the way.

“We’ve worked for this for four years. It’s such a surreal feeling,” said senior Quentin Woodson. “We felt like we were cheated our junior year and came back senior year and did things people didn’t think we could do.”

Coach Jay Price commended his team’s resiliency through the challenges of the past year.

“Steady is a good word to describe this team,” he said. “They are very consistent, very unselfish and they don’t care who gets the points. They just want to win. And they showed that again today.”

The senior trio of Maurice Cudjo, James Locke and Quentin Woodson shouldered much of the scoring load.

Locke caught fire early in the game, scoring 12 of his 19 points in the opening period. He also finished with 14 rebounds.

“I wanted to contribute however I needed to get the win,” Locke said. “If I need to get 20 rebounds I’d do it. If I needed to take 20 charges to win, I’d do it. I was willing to do whatever it took to win this game.”

Woodson was a force in the paint as he finished with 18 points, 9 rebounds and 3 blocked shots. Cudjo led all scorers with 21 points and took over late in the fourth quarter to seal the win.

The team has been without fellow senior and one of their top scorers in Antonio Watson who missed all the postseason with a foot injury. When it came time to present the state championship trophy on Saturday, Watson did the honors.

It was the school’s third boys basketball state championship and first since 2016.

Senior Jaden Harrel remembers all three of the state title runs. His father has been an assistant coach on all three teams. Fellow assistant Jordan Price played on the 2007 state title team. And Jaden’s older brother Mason Harrell guided the team to the title in 2016.

“I grew up watching assistant coach Jordan (Price) win in 2007 and my brother winning in 2016 and it’s an amazing feeling to win now with all the craziness and COVID this year,” he said.

Carl Albert sprinted out of the gate, taking a 19-9 lead at the end of the first quarter. Locke provided the early boost with 12 points in the period.

They continued to charge ahead in the second for a 32-18 halftime advantage.

Carl Albert maintained a double-digit lead in the second half but felt MacArthur bringing pressure in the fourth quarter. The Highlanders hit a 3-pointer to cut the Titans’ lead to 53-42 with just over 4 minutes remaining.

“I took a timeout because I was worried about MacArthur coming back. I wanted to shut that down because they’re so explosive and can score quickly,” Price said. “And our kids did a great job responding to that.”

The Titans squashed the rally with more offensive firepower. Cudjo reeled off nine points in the next two minutes including a basket and a foul that charged up the Titans bench.

“At halftime, coaches told us to trust our teammates,” Cudjo said. “In the second half, they hooked me up and I played my game.”

Carl Albert received a bye in the first round of the state tournament after Tulsa Rodgers had to withdraw due to COVID-19. The Titans beat Ardmore 70-54 in the state semifinals Friday night.

Carl Albert finished the year with a 23-4 record. All four losses came against fellow state champions Del City (6A) and Kingfisher (4A) and state runner-up Heritage Hall (4A).