Mustang American Legion Post 353 in April honored three of Mustang’s finest during a special ceremony held at City Council’s April 6 meeting and drawing a full house to witness the awards. 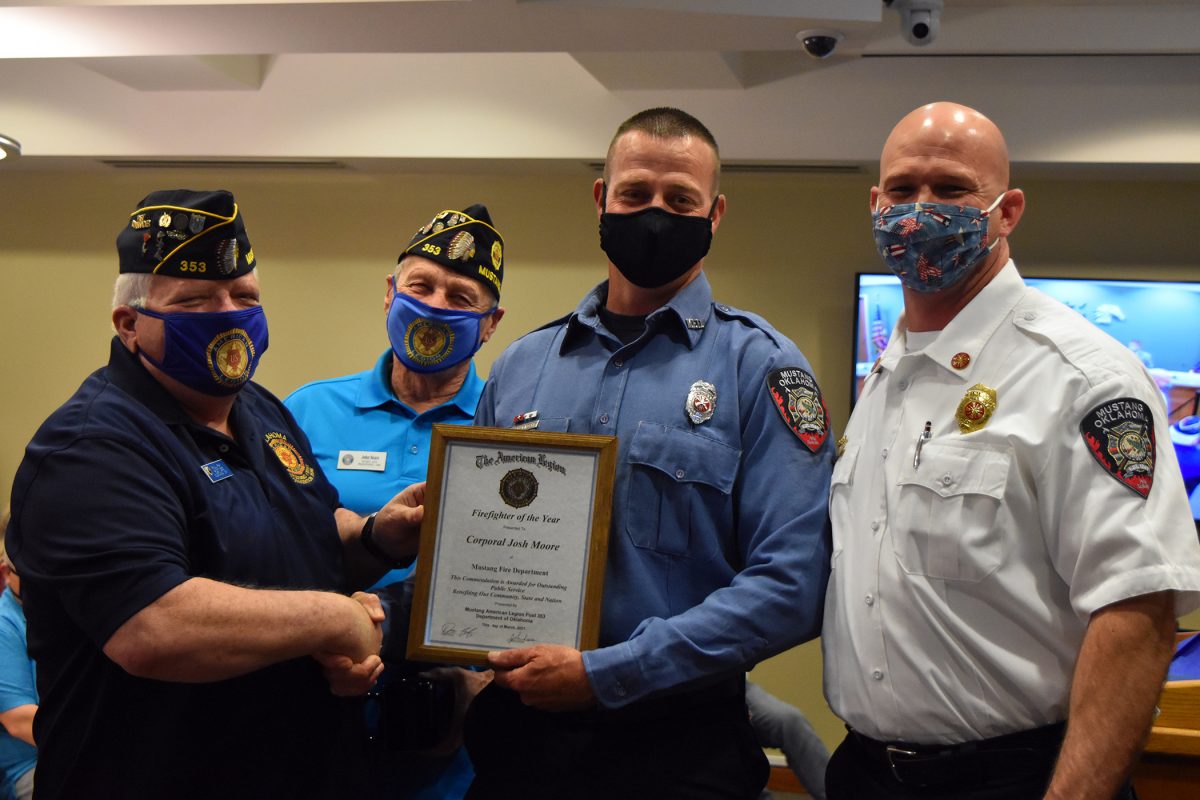 “Cpl. Moore continues to look for opportunities to improve himself and advance those around him – he has demonstrated his ability to provide top quality advanced life support care to the citizens of Mustang and those who visit our community,” Carruth stated in his letter nominating Moore for the American Legion honor. “He is also an active member of our EMS quality assurance committee, put in place to assure the community of Mustang receives quality EMS care.”

Moore also was recently appointed chair of a self-contained breathing apparatus, or SCBA, committee estimated to evaluate equipment for replacement, the chief said.

“This committee was well organized and performed detailed evaluations, stayed on time and within budget,” the chief stated. “Josh has also organized several driver operator and aerial operator courses, becoming an instructor for both courses, which will allow Mustang Fire Department to provide these courses in the future. 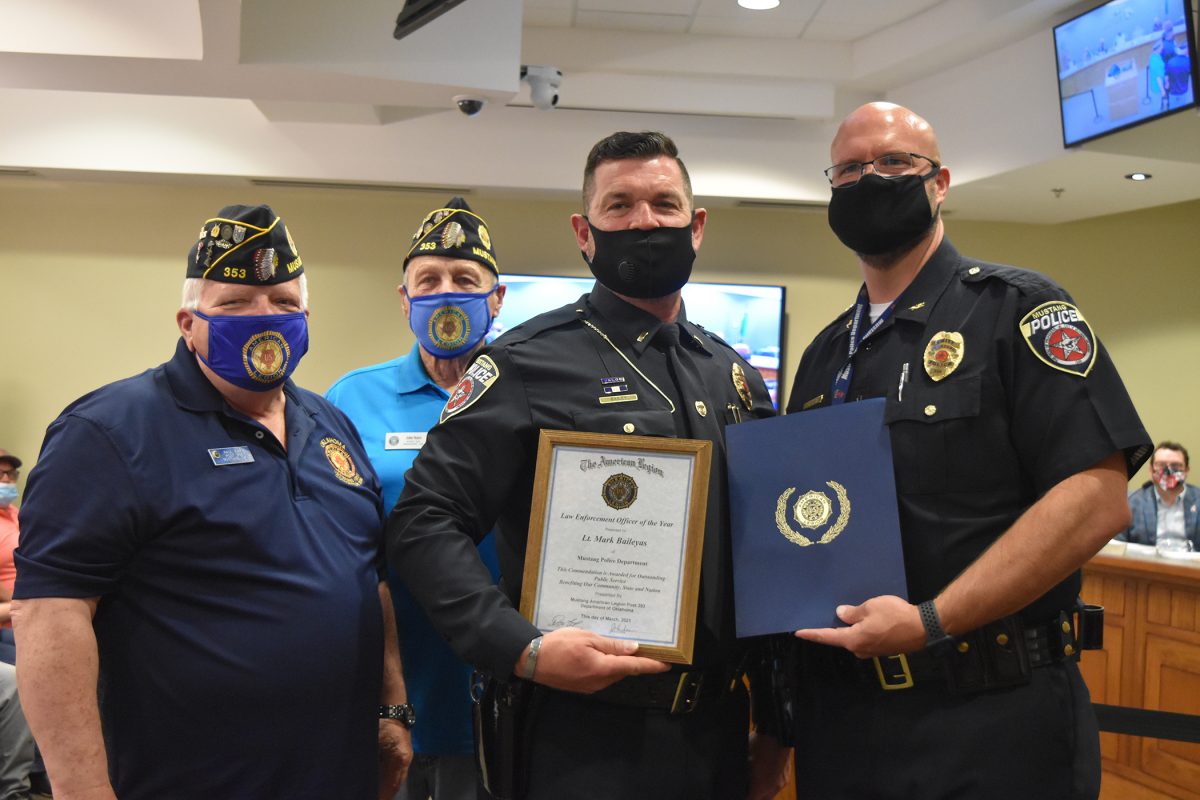 Initially a patrol officer, Bailey worked for about eight years as a Mustang High School school resource officer; he was promoted to the rank of lieutenant in 2018, Bailey has worked as a patrol supervisor since that time, Groseclose said.

“While serving as a school resource officer, Mark’s sincere care and compassion for the youth of our community was revealed – he is often approached by citizens who know him either from their time as a student or through their children who attended a Mustang school, and Mark’s genuine approach and fatherly demeanor with students has yielded him a tremendous amount of respect within the community,” Deputy Chief Mike Wallace stated in his letter nominating Bailey for the 2021 honor.

Bailey’s work with children and youth extended beyond the department – the lieutenant has been active in both Polar Plunge, an effort dedicated to fundraising for Special Olympians, and a hunting organization designed to introduce youth to outdoor experiences.

He also worked as a crisis negotiator, Wallace stated, not only for city of Mustang, but also as a part of Canadian County Special Operations Team and has been a mentor for several of his colleagues, culminating recently in Bailey being named the first coordinator of the recently formed Mustang police/fire department multi-agency peer team.

“Mark has been called on many times throughout his tenure to assist in highly volatile situations and many times his skill and dedication has led to a positive outcome in the lives of those involved,” the deputy chief stated. “The multi-agency peer team is an attempt to combat the mental stress today’s society places on first responders – Mark’s dedication to this cause has already proven itself, not only for our citizens, but through work he has performed for neighboring communities as well.

“One of the most difficult tasks for an officer, is to advance to a position where he or she is challenged with managing and leading his partners; Mark has the inherent ability to do exactly that,” Wallace stated. “Since becoming a supervisor for the police department, Mark’s leadership has been second to none; he has gained the utmost respect from those in his charge. – he is not only an exceptional officer, but his care for this community is also a tremendous example to everyone.”

With a varied career stretching nearly 37 years, Gayla Early was named this year’s Mustang city non-uniformed employee, an honor bestowed to her upon the recommendation of Finance Director Janet Watts, who also was present for her award presentation. 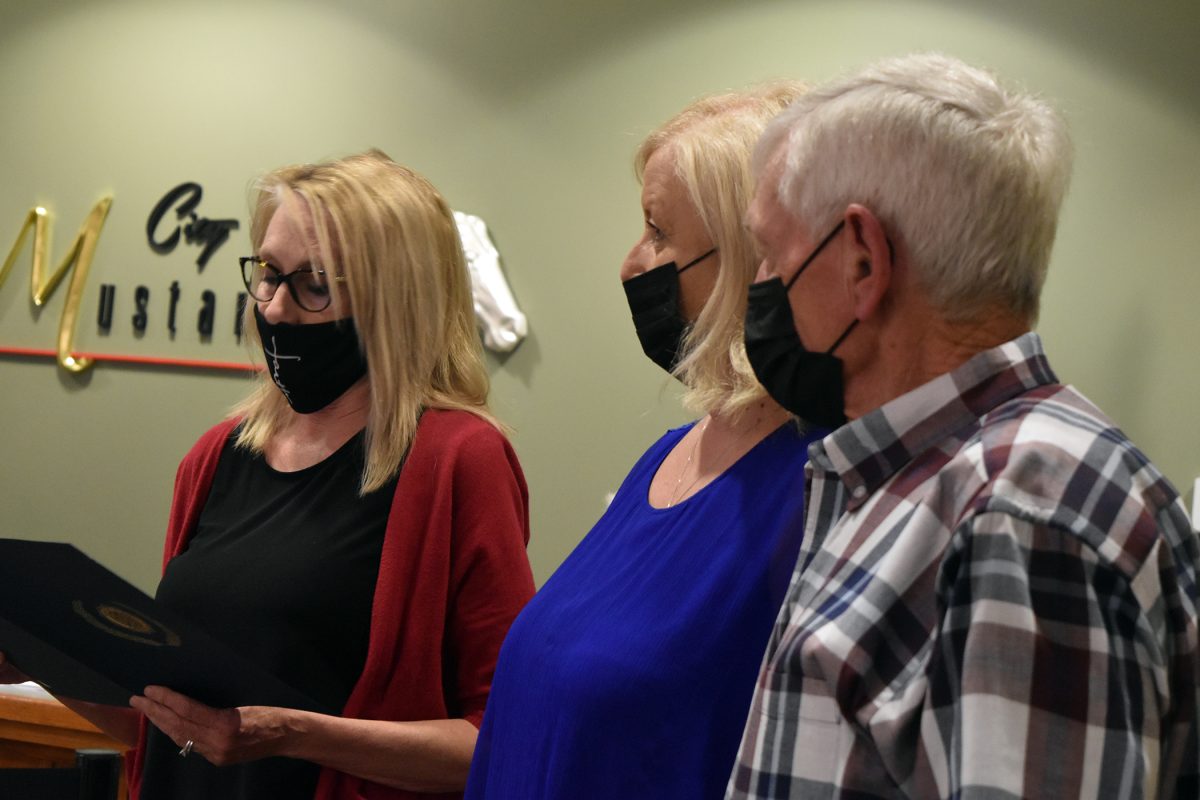 Early began working with the city in September 1984, first part-time with Mustang Police Department, transiting to full-time less than six months later, Watts stated in her American Legion nomination letter. At that time, Early served as court clerk and in records, as well as a fill-in dispatcher, as needed; she later became library director, then transferred to Community Development Department, where she worked as that office’s coordinator for seven years.

“Her zeal to improve herself displays in her work, community and the state,” Watts stated. “She is a top-notch court clerk – Gayla has always been held in high regard among other court clerks and for years has been called on by other cities for guidance and mentoring.”

Early also served as a team coordinator for the finance department’s Zuercher system implementation; she has served as an Oklahoma Municipal Court Clerks Association board member for four years, an organization she has been a member of for 21 years, Watts said.

“Most notable is Gayla’s overall knowledge of court laws and the system – her skills and knowledge have been the best and have gained the utmost respect from others,” Watts stated.