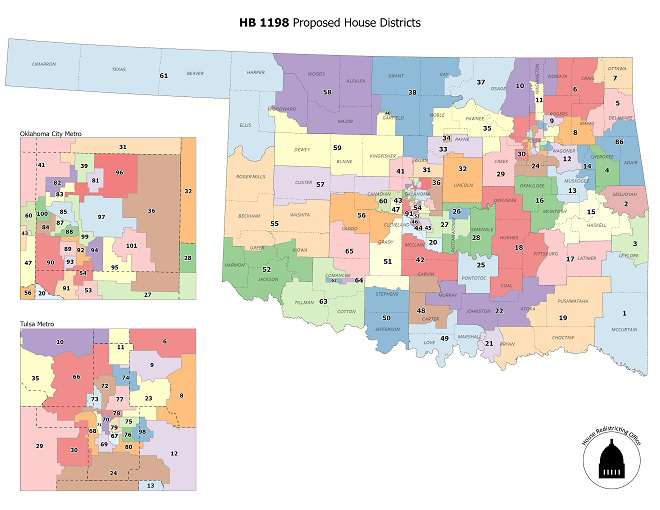 And some big changes are in store for eastern Oklahoma County.

One of the biggest differences is plans for an additional House District in the area. Under the plan, House District 36, which covers parts of Tulsa and Osage counties, would be relocated to eastern Oklahoma County and parts of northwest Cleveland County. The proposed district would largely follow along the new Kickapoo Turnpike, extending from Waterloo Rd. to SE 149th St.

House District 101, which includes the east side of Midwest City as well as parts of Choctaw, Harrah, Nicoma Park and Oklahoma City, will shift to the west. The district, which is represented by Robert Manger, currently extends to the Pottawatomie County line. Under the new plan, the eastern most boundary would be Triple X Rd.

House District 95, which currently includes much of Midwest City, would shift to the south. The district would lose parts of Midwest City along I-40 between Douglas Blvd. and Anderson Rd. and gain area in Cleveland County near Lake Stanley Draper. Rep. Max Wolfley is the current representative for the district.

House District 94, 97 and 99 would see little change according to the proposal. Andy Fugate, Jason Lowe and Ajay Pittman represent the districts.

State Senate
Senate District 42, which encompasses Midwest City, Del City and parts of Oklahoma City, would nearly double in geographic size under the new map. The district, which is represented by Brenda Stanley, would lose Del City and add much of Choctaw and Jones.

Del City would be moved into Senate District 46, which includes parts of downtown and south Oklahoma City.

The expansive Senate District 17, which currently includes parts of Choctaw, Jones, Harrah and Shawnee, will move its boundaries to the south. Under the proposal, it would cover much of Pottawatomie County and Harrah. Shane Jett is the current state senator.

Senate District 48, which covers north Midwest City, Spencer, and Oklahoma City, will stay nearly the same. George Young is the current senator for the district.

The state legislature is required to draw districts for the House and Senate every 10 years based on data from the U.S. Census Bureau. Oklahoma and other states have not yet received that data due to delay in the census. Lawmakers need to have the plan passed by May 27 but will meet in special session this summer or fall when the final data is ready.

The House and Senate redistricting plans will be brought up in committee through a redistricting bill. If the bill is passed, it will move to Gov. Kevin Stitt’s desk for his signature.The new maps will take effect in 2022.

Lawmakers must also finish congressional redistricting plans when the Census numbers are released. The state is not expected to see a change in the number of congressional districts.
The legislative maps were created by Senate and House members with input from the public. Legislators held 22 town halls, including four virtual meetings to solicit input.

“Because of the open and transparent redistricting process, the Senate district maps this year are more compact and better by most criteria than the 2010 district maps,” said Sen. Lonnie Paxton, and chair of the Senate Select Committee on Redistricting.

Rep. Ryan Martinez, chair of the House Redistricting Committee, said the same was true for the House.

“These districts are based on unprecedented public input gathered through the most town halls ever held, several committee meetings involving every House district, and public map submissions,” he said in a news release. “By putting the public in the driver’s seat, the House was able to produce a very strong map providing fair and proper representation for all Oklahomans for another ten years.”

The new district maps and related materials can be found on the Senate website at www.oksenate.gov/redistricting and House website at okhouse.gov/Publications/Redistricting.aspx.