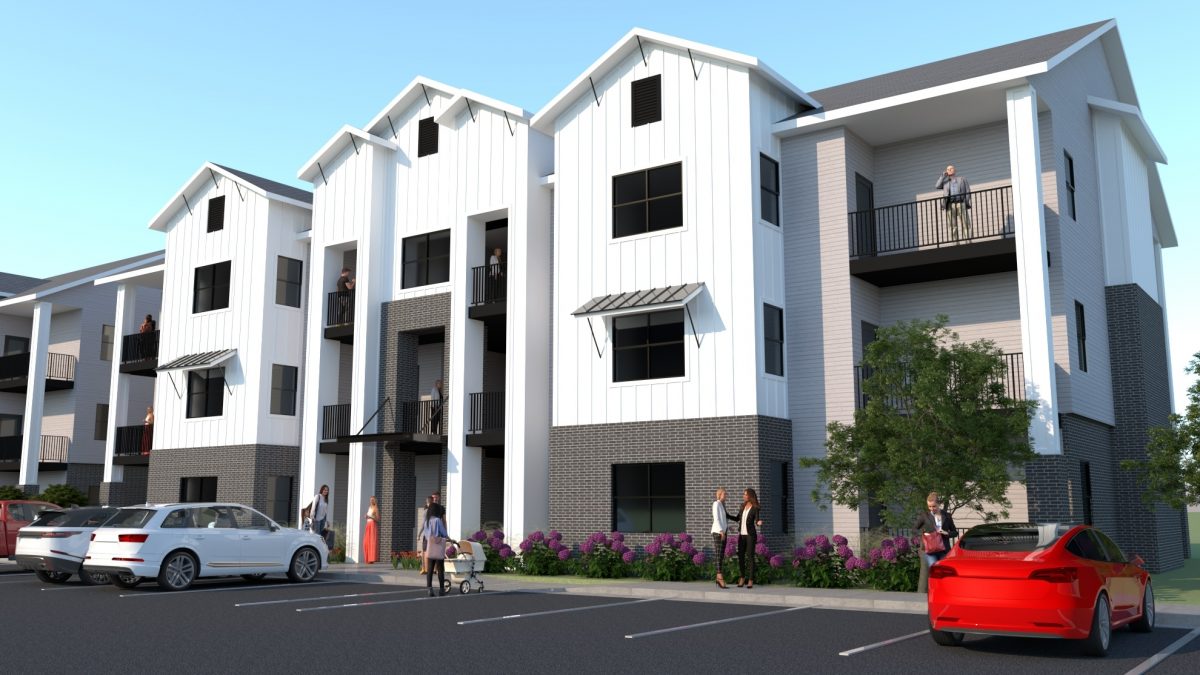 A preliminary design for a proposed apartment complex in the 5900 block of Will Rogers Rd. (Image provided)

A residential property developer is looking to build a $10 million high-end apartment complex near the retail, restaurant and entertainment center. The 84-unit multi-family complex is planned for the 5900 block of Will Rogers Rd., between Warren and Hudiburg drives.

The development includes acquisition of a city-owned property at 5901 Will Rogers Rd.

The Midwest City Memorial Hospital Authority, which consists of city council members, approved three separate items related to the development during last week’s meeting.
City officials agreed to sell property to Bentwood Investments LLC for $98,100. The agreement does not include closing costs.

The second item was an economic development agreement in which the city could rebate the developer the money paid for the property. The agreement includes conditions that the developer invests no less than $10 million to construct a “safe” and “attractive” multi-family project with a minimum of 84 units. The developer must obtain certificate of occupancy for all structures by Dec. 31, 2023. The property must stay on the Oklahoma County tax rolls until April 1, 2037. The developer must also remit invoices for all materials delivered to the site as proof that taxes were properly collected.

The city also approved a request to pursue zoning changes for the property. The lots are not zoned for multi-family housing.

At the council meeting, Robert Coleman, economic development director for Midwest City, presented city council members with an updated version of the real estate agreement that included some “minor amendments” and language concerning zoning changes for the property.

Councilwoman Susan Eads asked if they could postpone a vote because the information wasn’t provided in advance. The city attorney said the items were correctly listed on the council agenda and a vote would not violate open records laws.

Midwest City acquired the property from Sooner Baptist Church for $30,000 following the May 3, 1999 tornado. A parking lot was built on the property in 2002 to serve as overflow parking for special events at the Reed Center.

Coleman said the parking lot has seldom been used for its intended purpose and requires regular maintenance by city employees.

The development will feature three-story structures with a modern farmhouse design. It will also include amenities such as a workout facility, green space and common area. The developer also notes the proximity to nearby entertainment, shopping and restaurants as well as Rose State and Tinker Air Force Base as a main selling point for potential tenants.

Bentwood Investments is also working on a duplex development on Main St. in Midwest City, just west of Crest Foods, as well as others in Oklahoma City and Harrah.