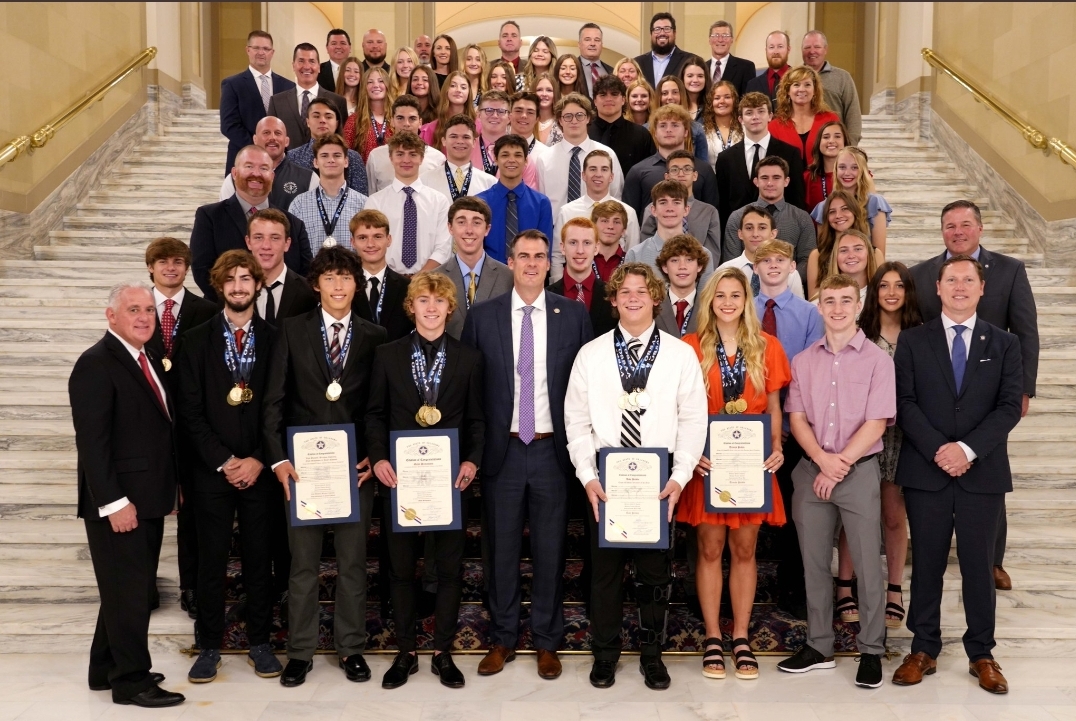 On May 19, several Mustang Bronco athletes, coaches, and even administration received awards at the Oklahoma State Capitol building. Governor Kevin Stitt and other high ranking officials were their to greet them.

Brian Picklo is the father of Mustang star athletes Tate Picklo and Trinity Picklo. Brian is also the Head coach for the Mustang wrestling team, and he received the honor of the 6A wrestling Coach of the Year. His team recently won the state championship and they were also honored at the capitol.

Senior Tate Picklo is currently the top ranked wrestler in the nation for the 195 pound weight class. Tate was injured in the 6A state finals. He was unable to continue after his injury, and he had to forfeit the match. That was Tate’s first loss since his freshman year. He was honored at the capitol as the 6A state runner-up for the 195 pound weight class.

Senior Trinity Picklo is a four sport athlete for the Mustang Broncos. She plays soccer, runs track and cross country, and she also wrestles. She was honored at the capitol for placing first in the 300 meter hurdles and also placing first in the 100 meter dash at the 6A state track meet.

The Mustang 4×800 relay team was also honored at the Capitol. They ran a combined time of 7:57.60 and they won first place at the 6A state track meet. Kyle Bussell, Jacob Thomas, Brendan Robeaux, and Gabe Simonsen were all of the the runners on the 4×800 relay team.

Gabe Simonsen also recieved the individual award of Gatorade Runner of the Year. Simonsen also was honored with an award because of his accomplishment of placing first in the 3200 meter run.

The Mustang Cross Country team was also honored at the State Capitol. They were named the State Champions in Class 6A this year.

The Mustang 6A Girls slow pitch softball team were also honored. They also won the 6A state championship this season.