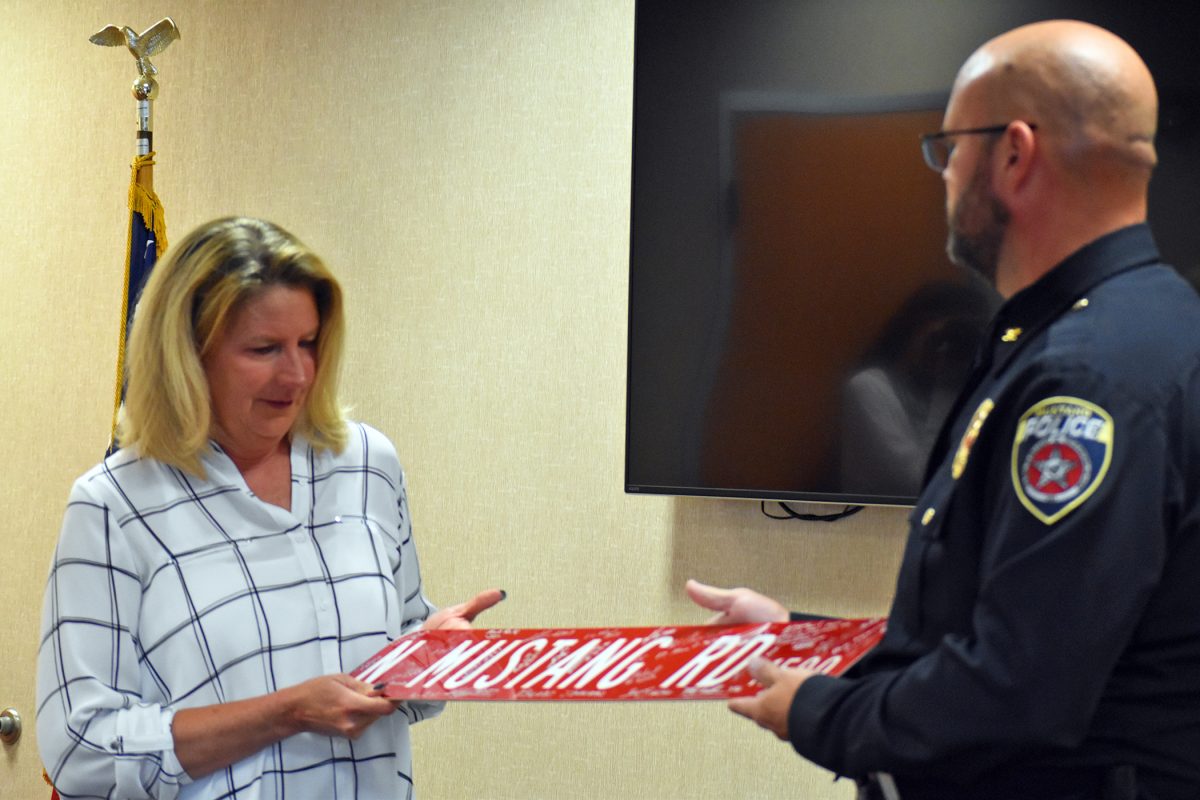 Lt. Camie McNeil was honored June 3 during a retirement ceremony marking her departure from Mustang Police Department after 26 years of service. (Photo by Traci Chapman)

One of Mustang Police Department’s most highly decorated and longest serving officers has retired, remembered for her selfless community spirit and dedication to those she never forgot to lend a helping hand.

That would be the legacy of Lt. Camie McNeil, Deputy Chief Mike Wallace said during a June 3 ceremony commemorating her retirement from the department she served for 26 years.

“Camie and I have known each other for a long time – we’ve worked as partners, and I was her supervisor, but she was always teaching me,” Wallace said. “Her dedication to the community, to the victims she helped and the people she served, is an example for all of us.”

That dedication earned McNeil the honor of American Legion Post 353’s Outstanding Police Officer of the Year twice, most recently in 2014 – an award that reflected not only that organization’s esteem but also that of her fellow officers and administrators at the department and beyond.

“Camie consistently maintains empathy for crime victims while methodically investigating offenses of all types,” Mustang Police Chief Chuck Foley said as McNeil was awarded the officer of the year honor. “McNeil has traditionally been the primary investigator in crimes against children and sexual assault victims.”

The longtime detective was promoted to lieutenant in 2019, taking the lead role in the department’s student resource officer program at Mustang Public School District. It was the first time a supervisor was named to that position; McNeil in that role strengthened even further close ties between the department and school district, Chief Rob Groseclose said.

McNeil served as a detective for 20 years, also taking a lead role in communications for the department. It was largely through her efforts Mustang’s Shop with an Officer blossomed into a major endeavor begun under Foley and continued under Groseclose. At the same time, she carried a major caseload that came with more than its fair share of challenges – abuse and neglect, death and despair.

Her poise and grace were on show in September 2011 and the subsequent months, when a Mustang case would propel the city into the national spotlight. It was then former Mustang City councilman and Nichols Hills Fire Chief Keith Bryan was shot and killed in his home; his wife, Rebecca Bryan, would be arrested, tried and convicted of first-degree murder.

It was a difficult case in many ways – Bryan and his family were well-known and popular, including Rebecca Bryan; McNeil’s challenge included the fact she knew both the victim and accused well.

“But she (McNeil) never faltered, she never lost sight of the job ahead of her, no matter how difficult it was or how heartbreaking the circumstances,” Foley said after Rebecca Bryan’s conviction. “Camie was not only the consummate professional but is one of the strongest people I’ve ever known – and she made sure justice was served in a case that could have broken someone else.”

While McNeil’s work in the Bryan case brought her to the forefront, it was the cumulation of more than two decades of dedication and hard work that made her such an asset – not only to the department and city but to the greater, larger community as well, Groseclose said. The presence of Mustang Schools Superintendent Charles Bradley and Canadian County District Judge Paul Hesse, among others, at her retirement ceremony illustrated how far reaching her impact was, he said.

“She’s been a huge influence on this department and in me, as chief and personally,” the chief said. “We are happy for Camie’s next phase and new opportunities, but she will be sorely missed by all of us.”

McNeil said she planned to work with her sister, who recently relocated to Mustang from Texas, in her real estate practice.