The Del City High School Gay-Straight Alliance (GSA) club is gearing up to participate in the OKC Pride Alliance parade on Saturday, June 26 in downtown Oklahoma City. This year’s parade will be the first ever pride parade to be held in the heart of downtown, rather than the previous route on NE 39th street. The DCHS GSA group is excited to make history alongside and with the OKC Pride Alliance.

“Del City’s GSA group, along with any and all other Mid-Del faculty, students, and community members that choose to, is marching in the parade to show our pride. Pride for the LGBTQ+ community and pride for our district that supports us,” said Shelby White, DCHS Counselor.

White and the GSA group are anticipating a large turnout for the parade. They sold 140. 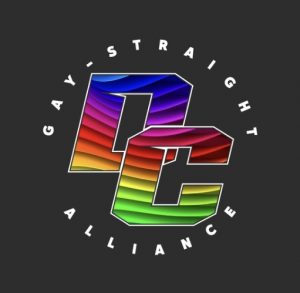 Mid-Del Pride shirts in preparation for the event and they have been constructing a float for the parade. Anyone interested in joining them can follow Del City High School’s social media pages for more information. White also said that while there will always be negative opinions when groups are working toward equity, inclusion, and social justice, the momentous outpouring of support that they have received has drowned out any negativity.

“We were lucky enough to have four community members, including State Representative Andy Fugate, come forward during the public participation portion of our last school board meeting to thank our board for their support of our LGBTQ+ students, faculty, and community members. No one spoke negatively. In addition, I have had students, parents, and faculty members from all three Mid-Del high schools contact me asking how they can help and be a part of the Pride Alliance parade. What started as an initiative by Del City High School’s GSA group has turned into an event that is bringing people together district-wide,” said White.

The Gay-Straight Alliance club at Del City High School was started two years ago, and White was happy to sponsor the club and help the students create a safe and inclusive space for the LGBTQ+ students and their allies. GSA is a club modeled off of a larger national network.

The GSA at DCHS meets weekly during non-instructional times, usually during lunch or after school. They summarize their goals into three parts: advocacy, education, and support. They work to advocate, not only for the LGBTQ+ community, but all marginalized and minority groups. They take every opportunity to educate both faculty and students about the importance of safeguarding LGBTQ+ students. Most importantly, their meetings act as a safe and supportive space for all students.

“I’m excited that the district is letting us do this because it is setting an example for our school and our community. I’m just happy that I can be a part of something like this because it can make a difference in the future. For a long time, people have judged members of the LGBTQ+ community, but I think we as a community can change that,” said sophomore GSA member, Laliana Cole.

DCHS GSA is also a service-oriented group. Over the past two years they have focused their service toward homeless youth in the area. They are aware that youth homelessness disproportionately affects the LGBTQ+ community. For this reason, their GSA group has partnered with Sisu Youth Services by volunteering at community events. They also partnered with the DCHS NJROTC to host a school-wide stocking stuffer drive to provide Christmas stockings for the youth living in the shelter.

In February of 2020,the DCHS GSA were able to attend the Oklahoma State University GSA Leadership Summit where they got to network and learn with GSA groups from all over the state.

“As a former high school student who could have used a GSA in his formative years, I am proud to work at a school that is supportive and progressive. Mrs. Shelby White and her students have created an inclusive and loving space for every student at Del City High School. Our students are finding empowerment in who they are and their community. Participating in this year›s pride parade is a huge step in showing that Mid-Del is a place for everyone. We are one family. We are Mid-Del,” said Del City Teacher, Guy Mitchell.