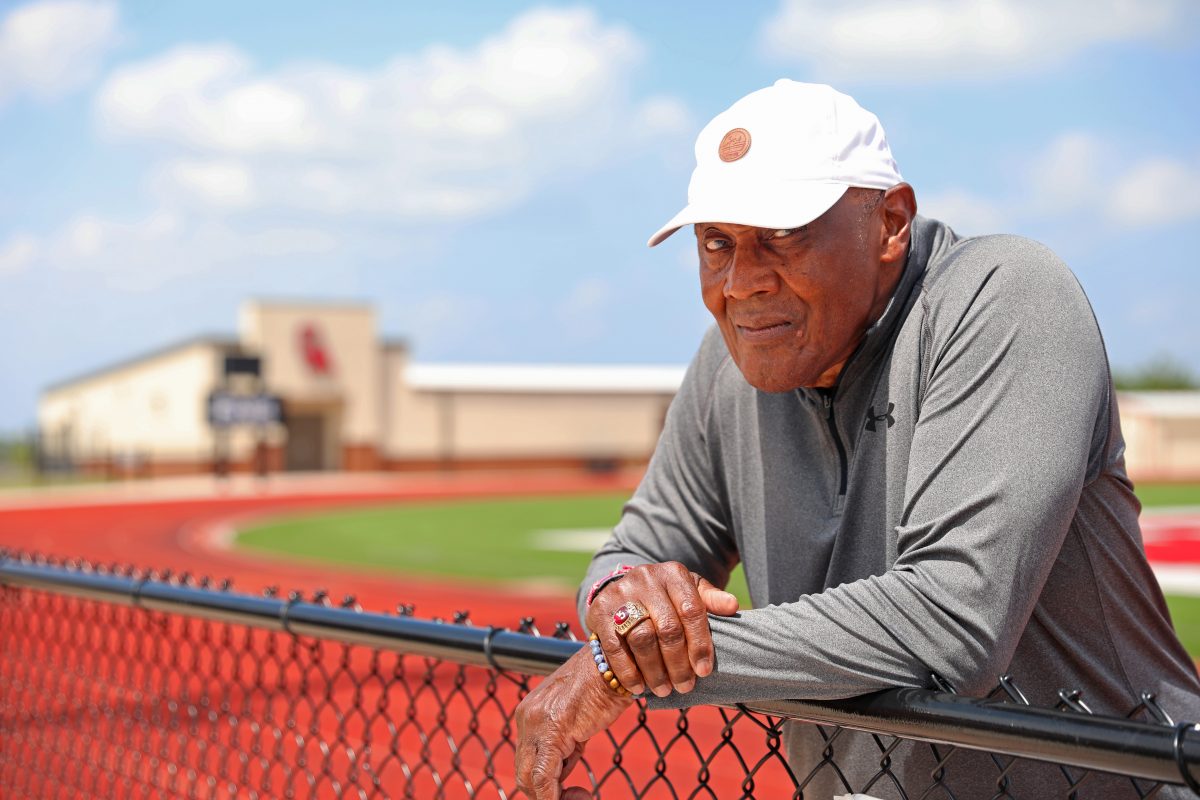 Success is no stranger to Carl Albert High School.

Its students excel year after year in academics, athletics, fine arts, and other areas.

But it is no accident.

Dedicated teachers and coaches help students achieve their goals with guidance and support.

For more than three decades, Jackie “Tex” Rollins has proudly carried that role. He helped the Titans win 11 football state titles along with three in track. In the classroom, he’s inspired countless students with lessons about history and life.

After more than three decades, Rollins retired from his beloved Carl Albert this spring.

“During 30 something years, you develop a lot of relationships at this school,” Rollins said. “There have been a lot of fine people that have come through here that aren’t here anymore. And there are a lot of students here that I coached and taught their parents.”

Carl Albert principal Kristin Goggans says Rollins is so much more than a teacher.

“He is consistently looking out for every student, teacher, administrator, and staff member. He has always and will always be a mentor and role model to the Titan Family. Coach Rollins plays a part in so many people’s favorite memories at CAHS. We will miss him so much,” she said.

As a coach, Rollins said his most fond memories included winning state championships in football and track.

“Our kids expect to win, and it’s just ingrained in them,” Rollins said. “We have a chance to win in every sport we have because it’s that same mentality.”

Rollins helped foster that winning mentality with his tough love.

J.D. Runnels, a Carl Albert alum who went onto play football at OU and the NFL, said the lessons he learned from Rollins helped him be a better athlete and man.

“He had the ability to make you want to impress him,” Runnels said. “The best players wanted to play for him and wanted to make him proud. But they knew he’d make them run and do pushups. It was kind of a double-edged sword.”

In the classroom, Rollins takes pride in the school’s annual World’s Fair, which he has led for several years. Sophomore world history students research their assigned countries and set up booths, prepare native foods and share artifacts or customs based on their research.

Dr. Silvya Kirk brought the idea over from a previous school she worked at in Florida. She worked with Rollins and the late Malcolm Wade to start the project.

“As I moved into different positions within the district, Coach Rollins, Wayne Dozier and the late Kathy Pafford kept the World’s Fair going,” she said. “As different ones left and retired, Coach Rollins became the anchor for this event and was an integral part from its inception until his retirement.  He has done us proud.”

Rollins grew up in Terrell, Texas about 35 miles east of Dallas. He was a standout athlete in high school but had no plans after graduation.

A teacher and the wife of Rollins’ high school football coach helped him find the next chapter of his life. The couple arranged for Rollins to attend East Central University in Ada.

“She said you’re not going to hang out on the block and end up getting killed or going to jail,” Rollins said.

Rollins played football at East Central. He and another Black player named Jimmy Scales, who was his roommate, broke the color barrier at the school. Rollins was a standout defensive end for the Tigers and also ran track and played basketball for one year.

“I’ll say this for Ada. I never heard a racial comment the whole time I was at East Central,” Rollins said. “I can’t say for sure that there weren’t some, but I never heard them.”

In 1967, he was preparing for student teaching when he received a draft notice in the mail. He went on to serve a tour of duty in Vietnam with the 101st Airborne Division.

He returned to Ada to finish his education at East Central. After earning a bachelor’s in education, Rollins started his career at Byng where he also was an assistant basketball coach.

Rollins stayed in Byng for five years. He said he was fired because the school superintendent did not agree with him working part-time as a bartender.

Rollins also joined the Oklahoma National Guard after returning from Vietnam and served for 28 years. His National Guard service included being sent to McAlester in 1973 to quell a riot at the Oklahoma State Prison. After serving in Vietnam, Rollins said he was not intimidated by the call.

“I had been in the 101st Airborne Division in Vietnam, so I was past being afraid of getting killed,” Rollins said.

Rollins later moved to Oklahoma City and was working as a substitute teacher when he received a call from Rick Bachman offering him a job at Carl Albert High School. He started teaching and coaching in 1988.

“Sometimes getting fired is not the worst thing in the world to happen to you,” Rollins said. “If I was still at Byng when Rick Bachman asked me to come up here, I probably would’ve just stayed there. But I was substitute teaching when he called, and I said sure.”

Carl Albert became Rollins’ home for more than three decades. He said that time wouldn’t have been possible without the support of his wife Anna B. Heidebrecht and their three children.

“Without an understanding wife, I couldn’t have a very good career coaching because there’s going to be turmoil at the house,” he said. “Coaching football at Carl Albert, you go seven days a week from August until December.”

In addition to coaching and teaching, Rollins officiated basketball and football at the high school and college level. That included working as women’s basketball official in the Big 8 Conference.

Rollins has also been involved with the Oklahoma Coaches Association All State Games since 1972. He was inducted into the OCA Hall of Fame in 2000.

The past year of teaching was a huge challenge. Rollins said he never had any doubts about coming back during the pandemic but said challenges with new software and connecting with students through remote learning were difficult.

While Rollins says he has no plans to teach in the fall, he hopes to continue coaching as a volunteer.