The new logo incorporates a modern design and the city’s aim to become the “Center of it All” for living, working, shopping, dining, and playing.

“The new catchphrase ‘the center of it all’ is taking the old marketing term, ‘Crossroads of America,’ and turning it into something new and a bit more modern,” said Miranda Hodge, Del City’s marketing coordinator.

Hodge unveiled the branding plan to the council during last Tuesday’s meeting.

The new logo takes inspiration from the city’s old phrase and the Oklahoma sunset. The gradient designs give homage to beautiful blue, pink and purple gradients that grace the horizon throughout the year. The logo sends the message that Del City wants to become the center for living, working, shopping, dining, and playing.

Del City currently uses the city seal as its primary logo. The new logo would not replace the official city seal, which used for purposes of certifying official records and instruments of Del City.
The seal is to be used in official city business, including employee shirts, proclamations, resolutions, and utility bills. The logo is used in marketing materials for the promotion of Del City.

Examples include the website, banners, promotional items, and social media. 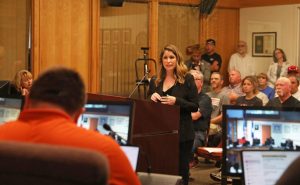 “We currently do have a logo, which is the seal with City of Del City beside it. What this is doing is modernizing that marketing logo. The hope is that this will help us with economic development, bringing in new families, and really assist in the city’s revitalization efforts,” said Hodge.

“I was given the task of redesigning and redeveloping our website. To make it more consistent and to make sure we have 99.99% up time. To make it easier for residents, businesses, and visitors alike to find the information they need,” said Hodge.

Originally the logo started as an E-3 jet to pay homage to Tinker Air Force Base but quickly evolved into what it is now.

Within the logo design, Hodge and her team incorporated various phrases to share depending on the marketing messaging. For example, a collaboration with the Chamber of Commerce will with the “Center of Business” logo, while a music festival with use the “Center for Art” logo design. Each logo incorporates a different gradient to reflect the tagline associated. For instance, the center of family is blue, which symbolizes trust in color theory. While the business logo utilizes green, symbolizing money and the economic growth of the city.

Councilwoman Pam Finch asked why the logo did not include the city’s traditional red and white colors. Hodge said they used color gradients to represent an Oklahoma sunset, but offered to make a variation that incorporates red.

Councilman JD Hock questioned the use of a city logo for Del City Chamber of Commerce events. Hodge said the city often partners with the chamber for events and believed the logos would be appropriate. The logo would also promote the city’s efforts to attract economic development.

Once approved by the city council, the rebranding will launch as soon as possible, with the priority being the new website.

The rebranding will then continue to roll out as the city works through all the current marketing materials and update them.

The city was able to save money by having Hodge independently do the website redesign and logo rebranding. The cost of promotional items will be determined after the logo is approved but will fall withing the 2021-2022 FY budget.

The council will vote on the rebranding at the next City Council meeting on July 19.