After strong backlash from residents earlier this year, developers reworked plans for a multifamily development near the Ridgecrest neighborhood.

The new proposal includes a mix of single family houses, duplexes and townhouses that would be built on vacant property north of E. Reno Ave. between Glenhaven and Marlow drives. It would include up to 100 dwelling units, which is half the amount of the previous plan. 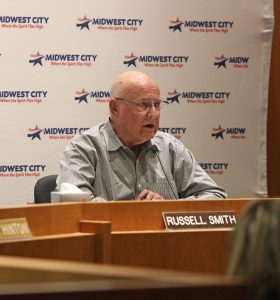 The project would be developed in two tracts. The first would consist of single family homes along Glenhaven Dr. on the east side, and tract two would include single family houses, duplexes, and townhouses along Marlow Dr. on the west side.

“The density has been greatly reduced from what we proposed before,” said David Box, attorney representing the developer Brentwood Investments.

The multifamily development would be just west of the Villa Gardens Apartments and north of the Crest Foods grocery store.

The developer is seeking to rezone the property as a Planned Unit Development. The vacant property is currently zoned for C-3 Community Commercial and R-6 Single Family Residential.
Midwest City’s Planning Commission unanimously recommended approval of the zoning request at the Nov. 2 meeting. The zoning request will go to the city council for approval at the Dec. 14 meeting.

A handful or residents spoke at the meeting expressing concerns about parking, traffic and increasing density in the neighborhood.

Kellie Gilles, planning manager for Midwest City, said the single family houses would be required to have garage parking and two spaces in the driveway. Billy Harless, community development director, said the city has codes about street parking and the neighborhood could petition for no parking along Glenhaven Dr. if it becomes an issue.

Original plans called for a 200-unit apartment complex. Residents pushed back on the proposal citing concerns about traffic, parking, and negative impacts on property values in the area. The Planning Commission voted 5-2 to recommend denial of the proposal at their Aug. 3 meeting.