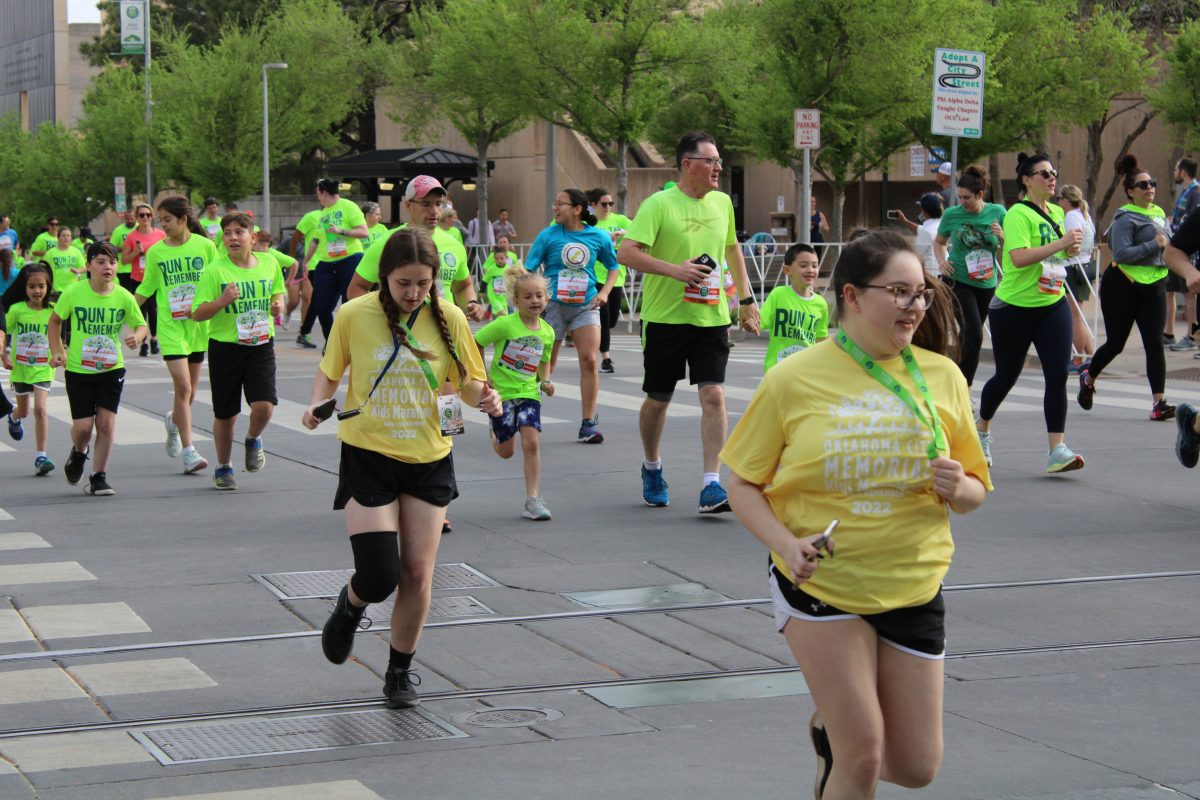 Runners assisted younger kids by running alongside them and giving them encouragement as they finish their month-long goal to complete the kids marathon.

Cross Country distance runners from Mustang High School participated in the OKC Kids Marathon on Saturday, April 23 as helpers for the younger runners in the Oklahoma City area.

“The kids run 25 miles, about a mile a day, for the last month getting ready for the marathon,” McGarry said. “And then they run 1.2 miles starting at the Memorial and finishing at Scissortail Park.”

At the first Oklahoma City Marathon, there was not a kids’ marathon for interested parties. The lack of a children marathon only lasted a handful of years before volunteers started doing one. McGarry has been helping with all the Kids Marathons since then.

That’s where the high school athletes and clubs come in.

“They don’t have to be able to run 1.2 miles, they just kind of go easy for 1.2 miles,” McGarry said. “It’s just a jog because you’re just running with little kids fifth grade and under. Some of them are fast (and) we stick our fast runners up in that group.”

McGarry said the volunteers mainly run on the sides of the street while the kids run up the middle of the road.

“We encourage them like crazy,” McGarry said. “We stay there until the last person’s there, and then if somebody falls we stay with them, encourage them and make sure they get to the finish line.”

This year, McGarry said 1,300 kids participated. He said the number is still down from its peak of nearly 2,500 participants three years before the COVID pandemic.

McGarry expects those numbers to go back up in the next few years.

The runners will be started in waves to make sure nobody gets hurt from others stampeding through the course. Each of the waves is around 200 children, with kids in groups by their schools.

McGarry ran in the 2004 Oklahoma City Memorial Marathon. He said his motivation revolved around two major heart stints, and he came back and ran the marathon afterward to prove to himself that he could do it.

“I didn’t prepare well,” McGarry said. “If you’re training, (it takes) maybe six months. If you’ve been running off and on for a while, then (it takes) probably three to four months if you want to do decent.”

McGarry, in recent years, has been in charge of starting the Kids Marathon and is in charge of the runner-set-go part of the race.

“It’s just a fun race where you go down and support the little kids running,” McGarry said. “Just trying to get kids to get away from their video games and doing all of that stuff and do something outside. Compete and challenge yourself and try to stay as active throughout life as you can.”