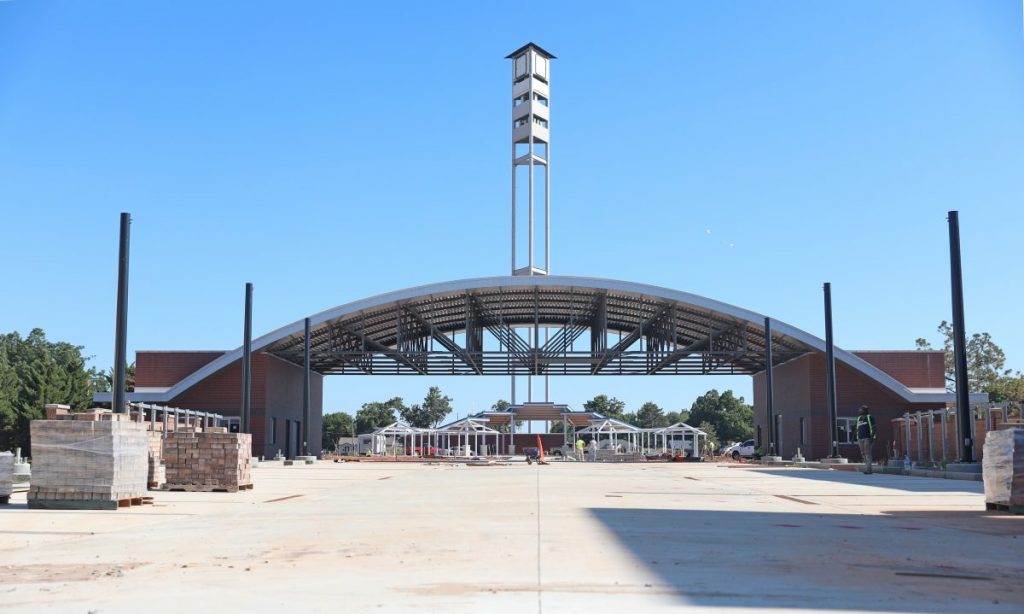 A view of the new W.P. Bill Atkinson Park looking north from the pedestrian plaza. The new park is slated for a public grand opening on Oct. 1. Photo by Jeff Harrison

The new W.P. Bill Atkinson Park is located north of Town Center Plaza on the former site of city hall. It is named in honor of the man who founded the city in the 1940s.

W.P. Bill Atkinson Park will serve as a gathering place and connection between the Original Mile neighborhood with the commercial district. It will include performance and event space, splash pad, playground, dog park and more. It will be linked to the nearby retail center by a paved pedestrian plaza that will include historical panels telling the story of Midwest City’s past.

The park is designed to blend into the neighborhood to the north with the playground area, pavilion, and open green space. The south part includes a covered structure designed to look like an airplane hangar and paved pedestrian plaza that can be used for festivals, outdoor concerts, and movie nights.

“The south part can be heavily programed with a lot of events and then as you get closer into the neighborhood those kinds of things go away,” said Brandon Bundy, Midwest City’s director of engineering and construction services.

The park also offers flexibility. Mid-America Blvd., which runs through the center of the park area, will remain open to traffic on a day-to-day basis but can easily be closed to through traffic. Adjustable bollards in the roadway can be raised to block traffic.

The signature element of the park is the large hangar structure that extends over the roadway and on the north end of the pedestrian plaza. The building includes restrooms, a ticket office and green room.

The nearby pedestrian plaza is paved with decorative bricks and will have string lighting draped overhead. The brick design also incorporates markings for parking at nearby businesses.

A dog park will be located on the west side of the park. The area will be fenced and preserve the existing grass berms. Water station areas will also be added.

The park will have playground equipment suitable for different ages as well as a climbing wall. The playground areas will feature synthetic turf surfaces.

Construction began in May 2021. Crews have completed most of the structures as well as paving and sidewalk work. The project also included extensive work relocating utility lines. An overhead power line that ran through the site was moved underground and the storm sewer was expanded for the additional park amenities.

“Our contractor Shiloh Construction has been doing a great job and the supply chain hasn’t been a problem, for the most part,” Bundy said. “Most of the delays have been with the weather or with moving utilities. We’ve had multiple issues with all the utility lines.”

The project is expected to be finished this fall with a grand opening celebration slated for Oct. 1.

W.P. Bill Atkinson Park is funded through a bond issue passed by voters in 2018. The project is expected to cost $4.43 million. Shiloh Construction was awarded the construction contract. The company also built the new animal shelter. 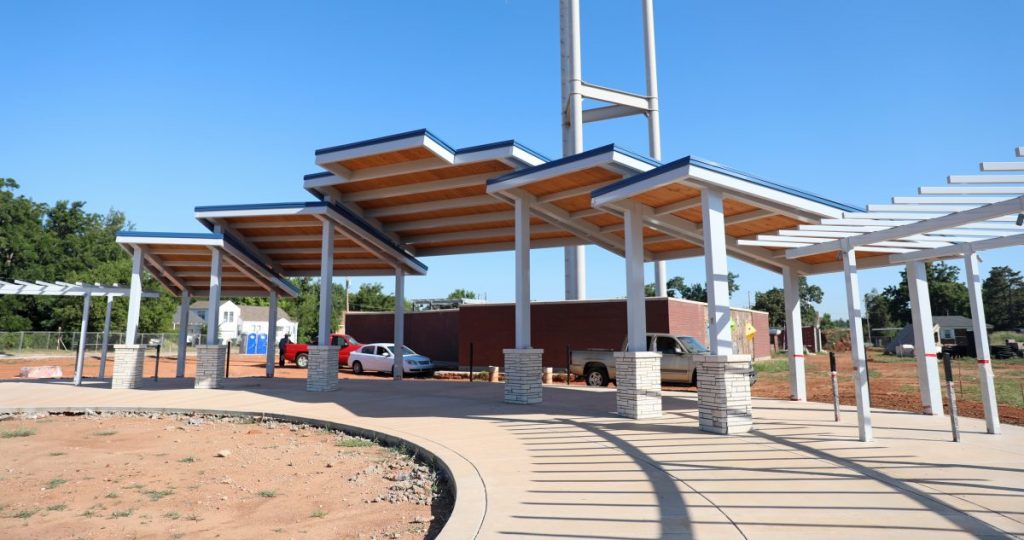 A pavilion area is being constructed at the new W.P. Bill Atkinson Park in Midwest City. Photo by Jeff Harrison 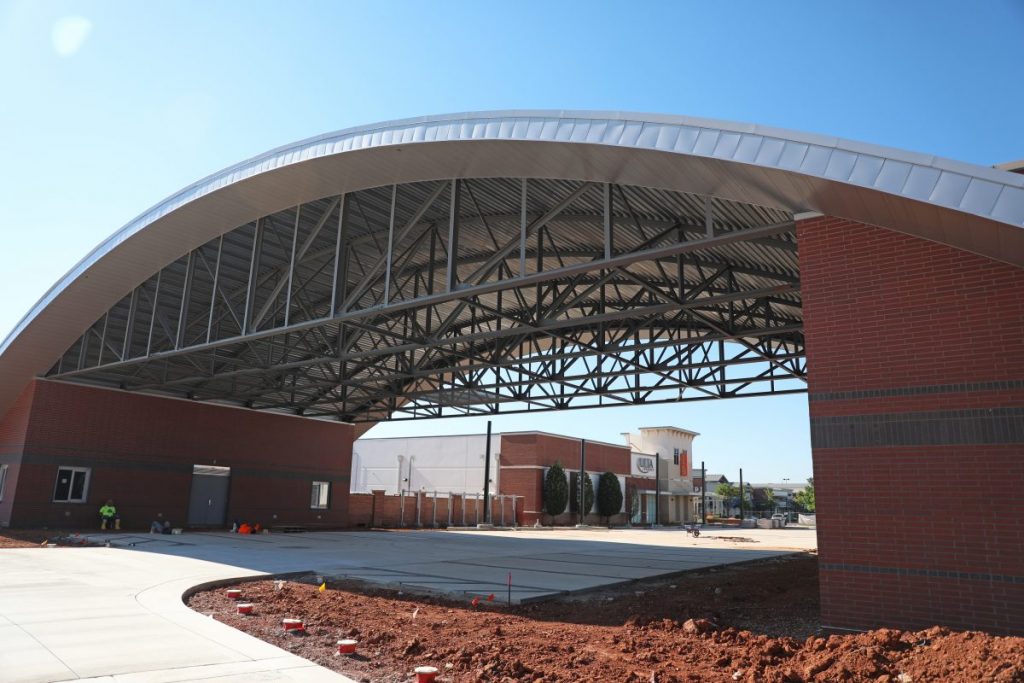 The hangar building extends over Mid-America Blvd. on the south end of the new W.P. Bill Atkinson Park. Photo by Jeff Harrison 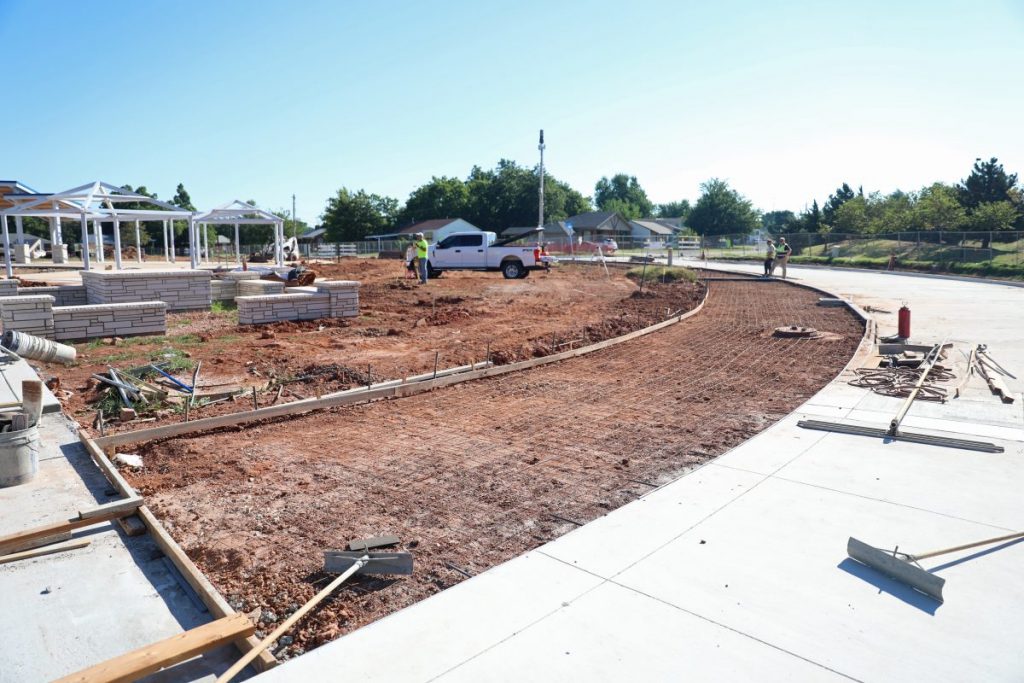 Crews prepare to pour a concrete area at the new W.P. Bill Atkinson Park in Midwest City. The new city park is slated to open Oct. 1. Photo by Jeff Harrison