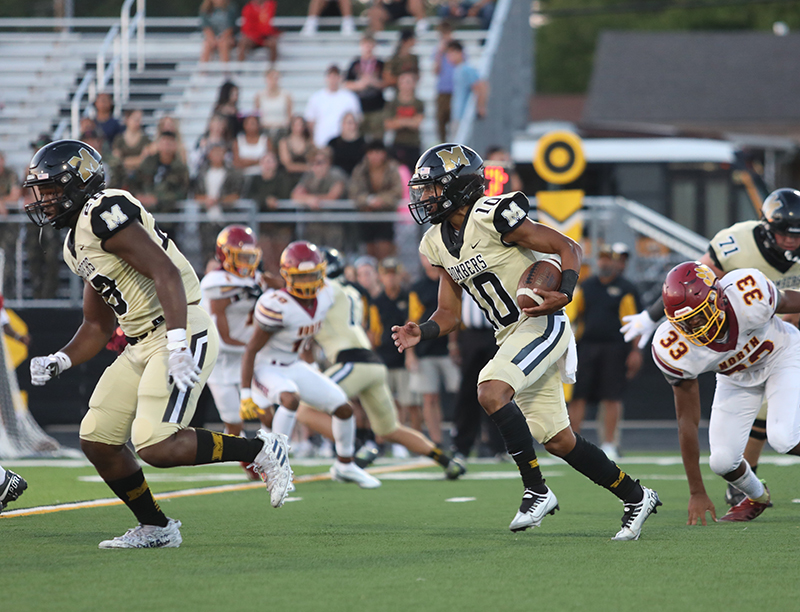 What a difference a week makes.

After getting roughed up in the home opener, Midwest City was the one delivering the blows last Friday night.
The Bombers trounced Putnam City North 38-6 in a homecoming victory at Rose Field. It was the team’s first win of the season and final non-district contest.

Midwest City’s offense came alive against the Panthers. Senior quarterback DeAngelo Irvin Jr. showed what he can do with protection as he guided the Bombers to the end zone on their first four possessions. Irvin finished the game 11 of 17 for 251 yards and two touchdowns and ran 90 yards and one score.

“DJ demands a lot of respect and when teams try to take away the running game, we need to throw over the top,” said Randon Lowe, offensive coordinator. “He did a great job checking us in and out of things and hitting vertical and wheel routes and doing four-year starting quarterback things.”

LaSiera LaViolette rushed for 105 yards and one touchdown on 10 carries. Jaylan Woody ran for a touchdown and scored three two-point conversions.

William Broiles led the team in receiving with three catches for 105 yards and one TD.

Lowe said their offensive line played outstanding after having to overcome injuries the past two weeks.

“We’re getting better up front and we finally played a game with the guys that we practiced with,” he said. “In week one, our left tackle went down on Wednesday, and week two, our right guard went down on the second play of the game. We had some young kids who worked all week. It was good to come out and really force our will and do what we wanted to do.”

The offensive line opened holes for the running game and provided pass protection for Irvin all night.

Midwest City also stepped up defensively. They forced three takeaways and allowed just one score after giving up 80 points in the first two games.

The Bombers (1-2) set the tone early with an 82-yard scoring drive. LaViolette capped the drive with a 29-yard run to the end zone. Jamarion Hamilton added the two-point conversion for an 8-0 lead at the 8:34 mark in the first.

North (0-3) responded with a drive into Bomber territory. On fourth down, they appeared to pick up a first with a screen pass, but Irvin knocked the ball loose and Santanna Landony recovered it. Irvin later hit Kenneth Colston down the sidelines for a 46-yard score and 14-0 lead.

Irvin caught the Panthers in man coverage again on the next drive and made them pay. He riffled the ball down the sidelines to Broiles for a 75-yard touchdown. Woody ran for the two-point conversion to make it a 22-0 lead at the end of the first quarter.

“Those touchdown passes felt amazing,” Irvin said. “It was the same play, and I just went through my progressions, and got the right read.”

Irvin scored on a 22-yard run in the second quarter and Woody added the two-point conversion.

In the second half, things slowed a bit for the Bombers. They punted twice in the third quarter, before adding their final score in the fourth. Woody scored on a one-yard run and added his third two-point conversion of the night, making it a 38-0 score with 8:06 remaining.

The defense continued to shine as they forced the Panthers to turn the ball over twice and punt once. North avoided the shutout with a TD run by Camarion Jones.

Traelyn Richardson led the team with seven tackles including three for loss, and one forced fumble.

Kaleak Knighten led the team with two sacks and had two tackles for loss.