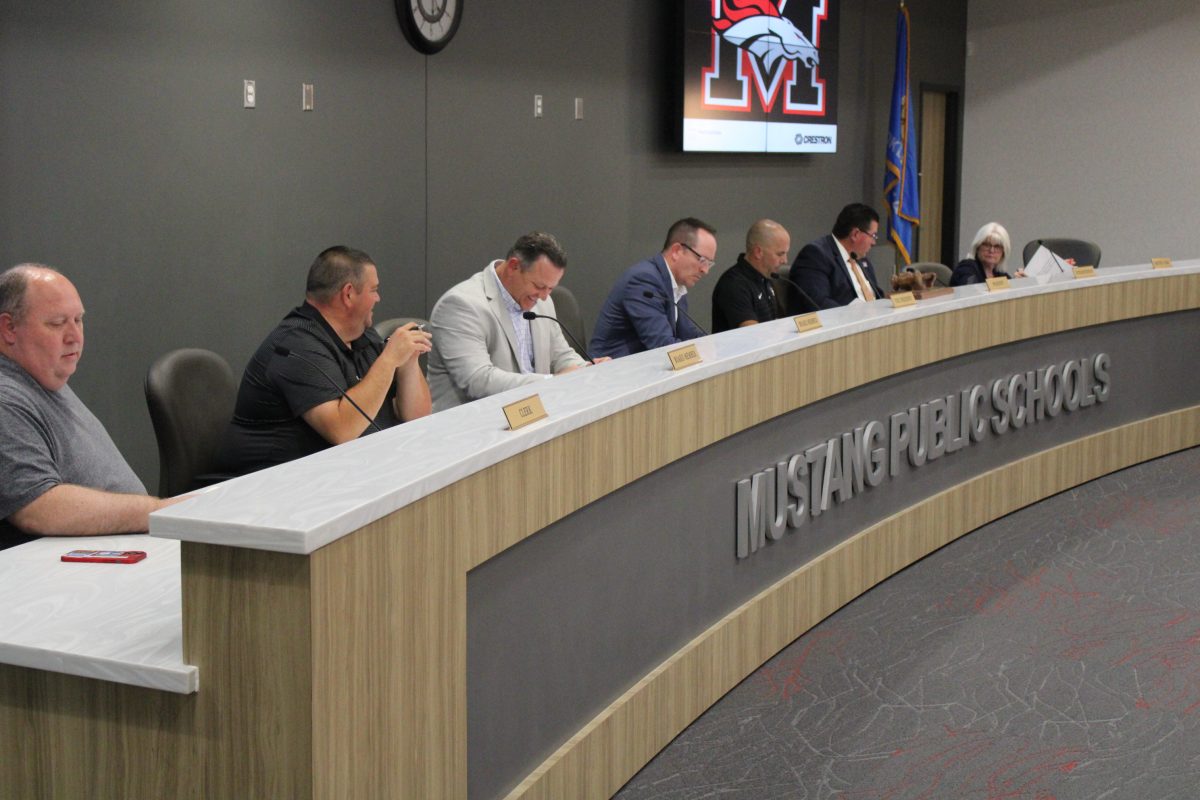 Mustang Board of Education discuss redistricting at monthly meeting at the MERC. (Photo by Jacob Sturm)

A mixed vote proved to be all the Mustang Board of Education could muster when discussing the latest redistricting of the ward map on Oct. 10.

Mustang Public Schools Superintendent, Charles Bradley, mentioned there is a law that school districts largest ward cannot be more than 10% greater than the smallest ward in terms of population.

State law requires school districts whose board seats are split through wards, zones or districts to review and redraw their boundaries the year following the U.S. Census results being submitted to the President of the United States.  The 2020 Census results were delayed due to COVID-19, meaning all Oklahoma districts’ completion deadline had been pushed back to Dec. 31, 2022.

Bradley said the disparity between the largest and smallest wards, when the census isn’t calculated and no change was made, came in at 23%-24%. He said state law requires the wards to be redrawn, with the information from the census, to make each ward within a 10% population total.

“Even though the populations are probably going to go up before next year, that’s the criteria, is that you have to redraw based on the census so that there is a 10% or less disparity on those,” Bradley said. “These maps will be given to the Canadian County Election Board, and then that will be put into their system to notify community patrons.”

Bradley did say this also could change who is eligible to run for board seats this upcoming cycle. Bradley indicated the plan is to have everything filed by the Nov. 18 deadline, but said he had no idea how long it would take for the election board to process and communicate the information. Tabling the discussion would not allow much time for the public to know their ward and voting places, hence making the redistricting changes important to approve at the Oct. 10 meeting.

“With the pace of growth in our area, the map had to be adjusted to comply with the State law,” Pittenger said. “The process is pretty specific in the law and allowed us to work with The University of Oklahoma’s Center for Spatial Analysis to slightly adjust the existing Ward boundaries to end up with our new map that meets legal requirements.”

Board of Education member, Jeff Landrith, voiced concerns with the process getting to the numbers and asked the board to table the discussion until the next available meeting.

Other members of the board argued the delay in approval for the ward lines could cause more people to be put in a bind on where they vote and what ward they could run for if they choose.

“I’m looking for a special board meeting next week,” Landrith said. “I just would like time to talk to whoever this is at OU and understand how they came up with the numbers.”

Board President, Todd Lovelace, voted with Landrith on postponing the discussion until the next available date to give more time for Landrith’s concerns to be addressed. The vote did not pass 3-2.

Landrith attempted to justify his stance on the matter.

“The board never put this on here to hire the person who did this at OU, and the board never had the opportunity to review this as a board until tonight,” Landrith said. “We had two board members attend without the board giving them the authority to do so, they did that on their own. I guess (they) just decided to. There’s no authority to do that, and as such we have not as a board had an opportunity to look at this.”

The redistricting then passed 4-1 after Landrith’s motion failed. Landrith is the representative for Ward 3 and is up for reelection on Feb. 14, 2023.

Board appointee Travis Helling is also up for reelection based on the laws surrounding Board appointments. He serves as the Ward 5 representative after taking over following the resignation of Dedra Stafford.