The HD 95 includes much of Midwest City as well as parts of Oklahoma City south of I-40, including Tinker Air Force Base, and northern portions of Cleveland County.

Wolfley is seeking a second two-year term in office. After several unsuccessful runs for the state legislature, Wolfley won the HD 95 seat in 2020 – unseating former Democratic Rep. Kelly Albright. He is a retired educator, having taught at Carl Albert junior and high schools for 40 years. He and his wife have eight children, the youngest who graduated high school last year.

During his first term in office, Wolfley said he’s pleased with legislation to eliminate all state income tax on military retirement and funding to eliminate the waiting list for services for disabled adults.

Wolfley said inflation is still a major issue. He believes eliminating the state’s grocery sales tax, freezing property taxes for seniors, as well as increasing the exemption of retirement income from state income tax could provide relief to residents. Legislation addressing those issues was passed by the House but never heard in the Senate.

“We want to do anything that helps those who need it and keeps government out of the way,” Wolfley said.
Wolfley said that like many Oklahomans, he has been troubled by instances of “corruption or gross incompetence” within state government particularly the Swadley’s Foggy Bottom Kitchen contract with the State Department of Tourism.

“Either way we need to get to the foggy bottom of it,” he said. “Then we need to hold people accountable, fix the problems and get taxpayer money back.”
Wolfley said his first term in office has been a learning experience. He’s enjoyed learning the processes at the state capitol and working with other lawmakers who are committed to improving the lives of Oklahomans.

“I’m impressed there are good people out there that want good things for the state,” he said.

Malone is a former educator, nonprofit worker and avid cyclist who has lived in Midwest City much of her life. She said she has a servant’s heart and can unite both sides.

“I’m a firm believer in people over politics,” she said. “Even if we’re the same party, there’s going to be a lot of times you’re probably going to get aggravated in the way I vote. That’s why it’s more important to talk to the person that wants to represent you. Make sure that they have a heart to serve people and that they have everyone’s best interest in mind.”

Malone comes from a political family and learned at a young age to advocate and stand up for what is right.

“We learned to make sure no one is left behind,” she said. “We have all chosen to live here and we’ve got to make the best of it. The way we do that is by pulling together and working.”

Malone was born in Midwest City and graduated from Carl Albert High School and later attended Rose State College and the University of Oklahoma.

In 1999, she gave birth to her oldest son Brayden, and her family became an Air Force family as they stationed first at Travis AFB in California. After they welcomed their second child, Malone went back to school and earned a post-baccalaureate teaching certificate and Masters degree in teaching from Western Governors University and began teaching elementary school.

She continued teaching after the family moved back to Midwest City, working at Pleasant Hill Elementary, Fairview Elementary and Kerr Middle School. She later moved from education to the nonprofit sector – first working at Teen Empower, a non-profit that partners with local schools to provide comprehensive sexual health education in middle and high schools.

Malone later moved to her current position as national events manager for RIVERSPORT Foundation. She oversees nearly all of the events the facility hosts.

Malone is an avid cyclist and led the Oklahoma Earthbike Fellowship. She has also worked to expand cycling programs in schools and recreational trails throughout the state. The organization partnered with Midwest City to build the Soldier Creek Industrial Park recreational trail.

“When I started with the [Earthbike] we were involved with three trails in the state and when I was finished we were involved in 22 different trails in various stages of development,” Malone said. “The whole purpose of that organization was to build, maintain and advocate for off-road cycling opportunities for people.”

She became involved with the American Canoe Association after her children started in canoe/kayak at the Oklahoma River. She became a race official and has earned a level three position – the highest ranking.

Malone wants to see the state continue to promote active transportation with additional trails and opportunities to people of all walks of life to safely get around.

Malone said Midwest City is a model community with its ever growing network of recreational trails.
Healthcare is another important issue for Malone. She said expanding Medicaid has been beneficial for Oklahomans, but is upset that the system has been turned over to a managed care system.

“I’m a firm believer that healthcare decisions should be made between a person and their doctor, period,” she said. “Nobody else should have a say so on that. And I get frustrated whenever we talk about healthcare declined by insurance companies. They have no business being in there.”

Education is a top issue for both candidates.

They both say they want to increase funding for public education – particularly to increase pay for teachers.

Malone says the public education system is being undermined by private sector interests, and teachers are often demonized.

“We have great teachers in this state from public schools to private schools to charter schools,” she said. “And the constant attacks on the profession have to cease.”

Malone said she would also like to explore career tech opportunities with a pre-service teacher program. Students in the program would be able to choose from two tracks – one track would enable them to immediately get credentialed to be a licensed daycare provider – and the other would allow them to become a paraprofessional or teacher’s assistant. They could work with a university or college to allow students to receive credit for their work experience or training.

“If they want to get into the teaching profession, this might be a great way to get certification to earn better money than working at a restaurant or other lower paying jobs in high school or college,” Malone said.

Wolfley believes the state could fund a $5,000 teacher pay raise and comparable raises for other state employees without increasing taxes. He wants to ensure that pay raises go directly to the teachers and not for administrative purposes.

“I’d like to see well-funded, high performing schools,” Wolfley said. “We are having trouble finding teachers and support personnel but no shortage of administrators.”

Oklahoma’s so-called critical race theory ban has been a hot topic. Wolfley defended his vote in support of the controversial House Bill 1775. The measure approved by Gov. Kevin Stitt in May 2021 prohibits instructors from teaching that “one race or sex is inherently superior to another,” and that “an individual, by virtue of his or her race or sex, is inherently racist, sexist or oppressive.”

Wolfley says the legislation is more nuanced.
“Critics of HB 1775 say it prohibits teaching the uncomfortable parts of our history,” Wolfley said. “It actually requires that they be taught, including the Tulsa race massacre, Jim Crowe, and the Trail of Tears. It just says you can’t tell students that they should feel guilty or uncomfortable because of what someone else of the same race or sex may have done.”
Wolfley also says he was incorrectly accused of supporting school vouchers.

“The bill they mention is actually an existing tax credit for people who donate to tuition scholarship funds,” he said. “We expanded the program to give the same credit for donations to public schools. The House refused to even consider the Senates voucher bill.”

For more information about the Nov. 8 election, visit okvoterportal.okelections.us 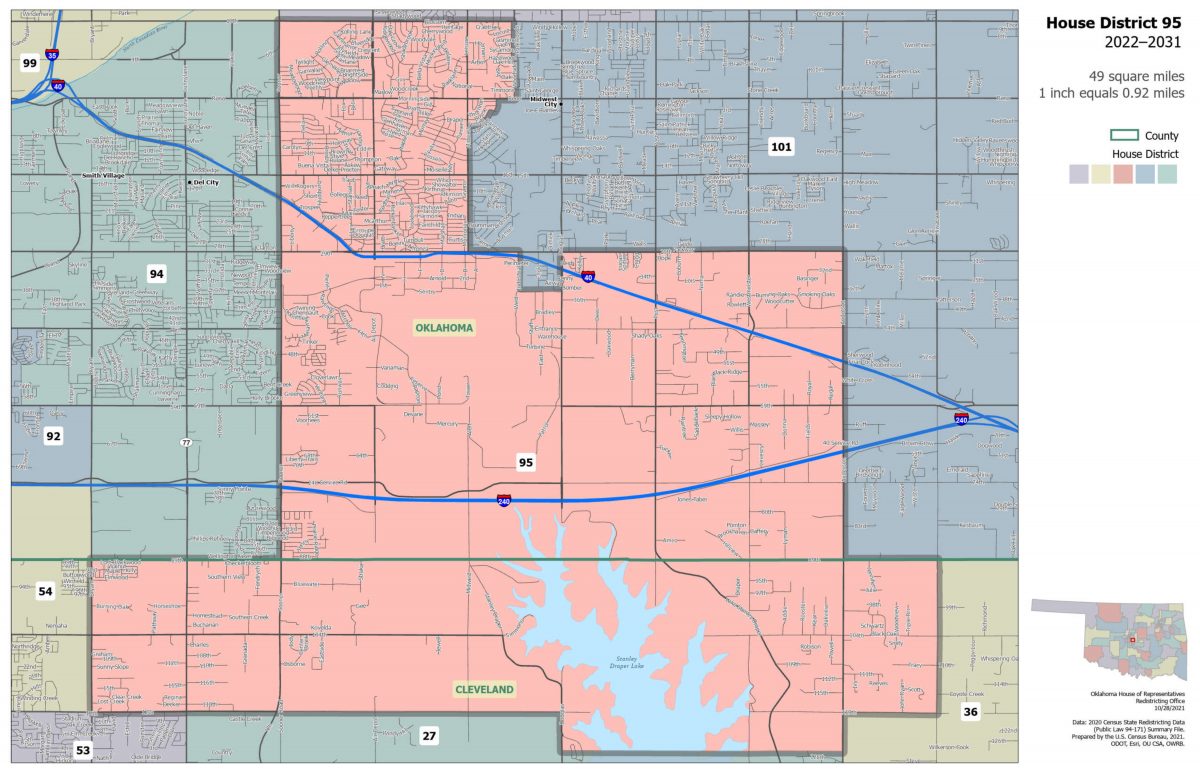