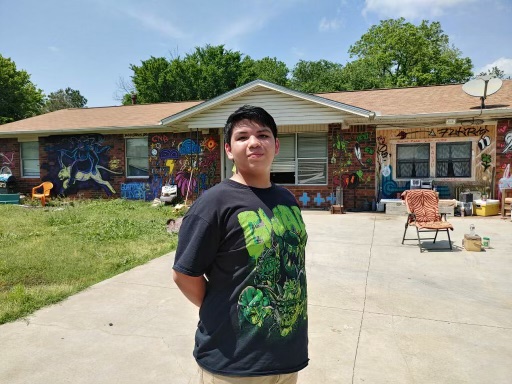 Lane Factor on set of a project he had been a part of. (Photo provided)

Lane Factor had no idea of what was about to happen when he took a seat ahead of a Mustang Board of Education meeting in November.

A senior at Mustang High School, Factor has made appearances in Reservation Dogs, The Fablemans, Ghosts, and other short films. He has also voiced audiobooks and served as a voice actor for the Netflix series Spirit Rangers.

Minutes later, he received the honor of being the first Native Heritage Honor Award recipient.

“I actually had no clue about it at all,” Factor said. “My family kind of had me go down there, and were telling me that it had something to do with the ACT, like they’re having some important announcement because I was scheduled to take it not to long afterward.”

Slowly, the meeting eased into the awards being honored. Then, Factor was confused until he was recognized with the first Native Heritage Honor Award.

According to a facebook post from Mustang Public Schools following the meeting, the award recognizes a student who does an outstanding job promoting, preserving, and advocating for their Native culture. Factor (Creek, Seminole and Caddo), is outspoken about the importance of native representation in the media.

Factor’s journey to that point couldn’t have started without taking a step. That step turned out to be an acting class.

“The thing that kind of started everything was my mother, actually,” Factor said. “She signed me and my sister up for an acting class. At first, I didn’t want to do that one, but then after trying it out a little bit I really liked, enjoyed it, and from there I did Reservation Dogs and then after that I did The Fablemans.”

Once on set for these production, one thing stood out.

“One of the things I did realize while doing it that I never really thought about before was just how much effort goes into each production,” Factor said.

Now, as someone benefiting from the acting classes and making progress through each production, Factor reflected on his expectations at the beginning compared to now.

“I never would have expected any of this at all,” Factor said. “And that the people who I’ve been able to meet and work with are some of the most remarkable people I’ve ever met. I never would have thought I would’ve been able to do it, especially from doing the acting class. My takeaway from it is really anything is possible if you put your mind to it, and just to never give up on stuff.”