As the federal consumer price index increases, so too do municipal utility costs, as water, sewer and sanitation rates took effect in October.
Mustang ordinances dictate annual increases be passed on to its consumers, based either on the yearly U.S. Department of Labor published consumer price index or a flat 2 percent, whichever is greater.

“This year a 2 percent consumer price index was published,” City Manager Tim Rooney said.
Officials put the regular rate hike into effect to allow the city to recover its own costs for water, sewer and sanitation services, officials said. Increases become effective the first day of October each year. 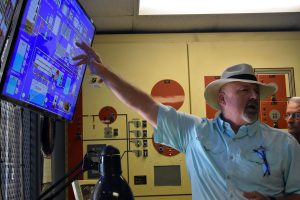 Mustang Water Reclamation Facility lead operator Kevin Cahoon explains how functions are monitored at the plant during a tour conducted as part of a September reopening celebration. (File photo)

With Mustang dependent on water purchased from Oklahoma City to meet all of its needs, in August 2014 City Council approved an ordinance allowing officials to pass on those higher costs for that resource to residents and businesses utilizing it. However, that hasn’t been the case in the five years since, Rooney said.

“The city of Oklahoma City has increased water rates every year since 2014, which has not been passed along to the citizens of Mustang,” the city manager said.

That has been a point of pride for city staff, who worked hard to find the best possible alternatives for infrastructure, while following Oklahoma Department of Environmental Quality restrictions, officials said – an effort boosted greatly in September as they celebrated the reopening of the city’s wastewater treatment plant, renamed Mustang Water Reclamation Facility.

The plant was one of a slate of projects approved by voters as part of an August 2016 sales tax extension measure. Working to implement the statewide Governor’s Water for 2060 legislation, the new plant permits Category 2 water reuse, the first in the state given the greenlight to do so by DEQ, MWRF lead operator Kevin Cahoon said after the plant reopened.

The ability to reuse water means Mustang could cut back on how much water it was required to purchase from the larger municipality surrounding it, said Justin Battles, assistant city manager – in great part due to its ability now to treat – and then reuse – water at parks and for ballfield and soccer field irrigation and the like.

“This also lessens the annual water burden and cost to the taxpayers on the largest user of water in Mustang – that being the city of Mustang,” Rooney said.

The $6 million project meant up to 30 million gallons of reusable water could be used for irrigation purposes; up next is completion of a reuse water filling station, which could allow Mustang to recoup additional costs through its sale of non-drinkable water to other consumers, officials said.