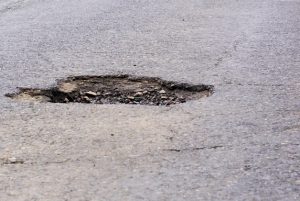 Potholes regularly plague roads within the city limits in Choctaw. Officials say patching these potholes provides a temporary fix at best, while removing most of the city’s old roads and reconstructing them with proper dirt work underneath could provide a long-term solution.

Tired of driving on sub-par streets and roads in Choctaw?
Choctaw residents will have an opportunity to do something about the deplorable road conditions that exist in parts of the city on February 11, 2020 when they will have an opportunity to go to the polls and approve a slight increase in sales tax and ad valorem taxes with the income generated to be used exclusively for street and road improvements in the city limits.
Choctaw’s last election to fund street and roads improvements and maintenance was in 1999 for a total of $2.8 million.
The current proposal will generate an estimated $40 million in dedicated funding for streets over the next 25 years.
On Wednesday, Choctaw City Councilmen Mike Birdsong and Roger Malone, both members of Mayor Randy Ross’ Task Force, met with Choctaw Chamber of Commerce members and guests at the Eastern Oklahoma County Technology Center to discuss the proposal.
The proposal has two elements. General obligation bonds to be authorized by the voters, and a new 0.75 percent sales tax for streets to be authorized by the voters.
The GO Bonds to be authorized are currently estimated at $13 million.  The entire $13 million will not be issued at once.  Instead, the bonds will be sold in dollar amounts and at dates that allow the City to target a mill levy.  The mill levy target being discussed is 6 mills. A 6-mill levy on a $100,000 house with homestead exemption would result in increased property taxes of $60/year, or $5/month.
The long-run plan would have the City returning to the voters sometime in the next 10-15 years to authorize additional GO bonds that will be issued as the older GO bonds are paid off, to allow the City to keep investing in Choctaw streets while maintaining the 6-mill levy target.
Voters will also be asked to approve three-quarters of one percent (0.75%) increase in sales tax which means that for every $100 purchased in Choctaw, the sales tax increase will be 75 cents. That will increase total sales tax in Choctaw to 9.5%. The increase will generate approximately $1.1 million/year in revenue to fund the street improvement projects.
Neighboring Midwest City’s current tax rate is 9.1 and Del City’s is 9.0. In Harrah, the rate is 8.5%.
The resolution calling for the election will be presented to the City Council either on Nov. 19 or Dec. 2. Voter registration opens on Jan. 17 and the election will be held at the regular voting sites in Choctaw on Feb. 11.
This will be the only item on the ballot.
“We do not currently have any funding to ‘fill the holes’ and the 20-year life expectancy has expired, so we basically need to start all over and that will cost money to not only accomplish but also maintain,” Birdsong said.
The Mayor’s Task Force was formed into four distinct areas:
1. Citizen driven to identify the areas of the city where roads are a problem and offer suggestions on how to fix those problems (turn lanes, curbs, sidewalks, etc.) This group was specific that a “band aid” approach not be taken, but permanent solutions utilized. They also identified safe roads near schools as a high priority and were adamant that contractors not city employees be used for the project.
2. The road selection team that took those suggestions, examined them, identified 129 miles of roads and gave each a rating.  They examined snow routes, truck routes, school zones and restricted parking areas. That list is being condensed to 8 specific areas for the initial projects.
3. Finance package team worked out the details on estimating the cost and formulate plans for paying for the massive project, identifying general obligation bonds which would produce instant cash flow and sales tax increase for long-term available funds.
4. The election team will shoulder the responsibility of spreading the word, getting people to register and work on strategy to get voters to the polls. This group devised the time line for the election and the availability of funds after voters approve the project, making bond money available by late 2020.
One of the areas included on the list will definitely be the pavement around Westfall Elementary where cars pulling off the road and parking lots have created “mounds” of broken asphalt, Birdsong said.

Note: This article was written by John Martin with contributions by Ryan Horton.