An informative webpage has been put up by city staff to help inform the public about the upcoming Feb. 11 election.
The new page can be found by navigating to Home>Residents>February 11, 2020 special Election at mychoctaw.org.
City officials hope the site will help the public better understand the condition of Choctaw’s roadways and budgetary limitations, while also presenting the factual information used by the mayor’s road task force to determine an election was needed to accomplish the goal of beginning road repairs soon and ensuring they continue into the future. 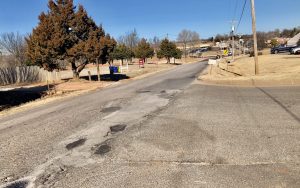 Failed road repairs are common near Harper and NE 20th. City officials say the roadway is one of many that needs totally rebuilt beginning with a proper base. (Photo by Ryan Horton)

“This is an unbiased website with the factual information,” said City Councilman Mike Birdsong. “We won’t be telling people how to vote through the city website, but want to be transparent as possible. We’re going to put all the information out so anyone can see what we saw. So there’s a ton of information up there. If you want to see the road core samples or read through the entire report, it’s all there.”
Birdsong is confident most residents will come to the same conclusion as those citizens that have been working on a long-term plan since May 2019 when all the information is available.
“The core samples tell a story. In some places our most traveled roads only have 5/8 of an inch of pavement with nothing underneath. We could put down a two inch asphalt overlay and act like we did something, but five years down the road we’d be right back where we were,” said Birdsong.
“Most of our roads need taken down to the base. This is why when the city goes out and fixes something it doesn’t last. The citizens told us they’re tired of a band-aid approach, and want a more permanent solution.”
Two ballot questions will go before registered voters within the city limits Feb. 11.
The current proposal, broken down into two separate ballot questions, would provide the city with an estimated $40 million in dedicated funding for roads over the next 25 years.
The plan has two crucial elements, and both ballot questions will need to be approved by voters to ensure all major road problems are addressed in the near future.
The first proposition calls for general obligation bonds, while the second proposition calls for a new three-quarter cent sales tax.
The first proposition calls for the city to take on general obligation bonds in a sum not-to-exceed $13 million.
City officials say a 6-mill levy would be the target to accomplish this portion of the road project funding.
The tax would be added to the property taxes of homeowners in the city. The long-term plan would have the city returning to the voters sometime in the next 10-15 years to authorize additional bonds that would be issued as the older bonds are paid off. That would allow the city to take on additional road improvements, while maintaining the 6-mill levy target without further increasing property tax bills.
The second proposition will request voters to approve a new three-quarters of one percent excise tax.
The new sales tax (0.75%) would go strictly toward constructing, improving, repairing and the maintaining of streets, roads, alleys, bridges and sidewalks.
If approved, the sales tax rate in Choctaw would go from 8.75 to 9.5 percent.
City officials say that increase should produce an estimated $1.1 million in revenue a year dedicated strictly to road improvements.
City officials say, with the passage of both ballot questions, citizens would see major road work underway on some of the city’s worst and most traveled roadways in 2020.
“Right now there’s no Plan B. The citizens told us they don’t want a band-aid. We need funds to do the initial work, and then funds to upkeep those and keep working on others. We’re trying to do the worst roads and most traveled first,” said Birdsong. “The $13 million in bonds allows us to do four major roads. The sales tax allows for us to bring in tax from those other than our citizens. That will generate funds to do other projects and do needed maintenance in the future.”
Birdsong says city staff has done a great job providing all the information used to determine the current plan.
“I just need to see there’s nothing under these roads. Some of these road core samples scare me. I don’t need much data other than that, but if residents do it’s all up there,” said Birdsong. “If we haven’t addressed a question on the site we’ll update it as people bring legitimate concerns to our attention.”
There’s a list of frequently asked questions on the site that will be updated.
Two Town Hall meetings have also been planned to help address questions and concerns with the two proposed ballot questions.
The first meeting will be at 6:30 p.m. Jan. 14 at Eastern Oklahoma County Technology Center.
A second meeting will be scheduled, most likely in early February, to accommodate those who could not attend the first meeting or desire additional information.

Information for the Feb. 11, 2020 Special Election