A longtime employee in the banking system, Mary Henderson will be retiring on Friday, Jan. 17.  She has worked at BancFirst in Nicoma Park for the past 12 years.
Henderson said it was a hard decision to make to retire as she considers her customers and co-workers as family.  She will be giving up the community service with the Choctaw Kiwanis Club that she has been doing the last four years as after retirement she will be traveling and visiting with her family. 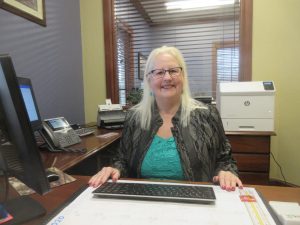 Mary Henderson is retiring after 12 years with BancFirst in Nicoma Park. Henderson started her career in banking in 1981. (Photo by Maxine Wheelan)

Cindy Plugge, CSO & Vice President, congratulated the longtime BancFirst employee, but it was with mixed feelings that she announced her retirement.  Plugge recognized Henderson’s achievements over the past 12 years of her dedicated service and will always be remembered for her hardworking, committed and friendly personality.

Henderson started her banking career in 1981 when she joined the Liberty Bank which was then in the community, and she later moved to Oklahoma City with Liberty Bank.  She was with Bank One and then Chase Bank for 10 years before joining BancFirst where she has been employed for the last 12 years.

She lost her husband Tom of 35 years, over 10 years ago.  Her son Michael attended Harvard and graduated from Stanford Medical School.  He now works as doctor and travels often.
A retirement party will be held on Jan. 17 at the BancFirst, 12924 NE 23rd Street in Nicoma Park. Her customers and friends will have a chance to send her off with their best wishes and thanks. Guests are invited to stop by from 9 a.m. until 5 p.m.