The public forum, hosted by the Choctaw Area Chamber of Commerce, had nearly 80 in attendance and another couple hundred watching live through the Facebook Live video stream provided by the chamber.
The Town Hall meeting featured city officials going over the plan for road improvements and the two ballot questions voters will decide on Feb. 11, a presentation from Wall Engineering and questions from the public.
City officials in attendance also remained available after the meeting to address any other questions and concerns from the public. 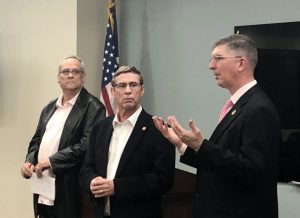 “I’m proud of our Council, task force and community members who have taken time out of their lives to work together in preparing for a better Choctaw,” opened mayor Randy Ross.
“It is a plan, and with any plan there are imperfections. Overall, this is the best possible plan to address the challenges we face.  In developing this plan we have looked at other cities, counties and states to see what options are available. The main constraint is we’re limited to sales and property taxes. The city gets very little of your property taxes, because that is the lifeblood of our schools the city has been very hesitant to impact them.”
Ross took his time to address commonly asked questions and combat numerous myths and half-truths that have been widespread through social media.
“Fear, doubt and uncertainty are the easiest things to sell, and we know there’s plenty going around on the internet,” said Ross. “We hope you’ll see we’re doing everything we can to be as upfront and open about what we’re trying to do.”

Are the taxes permanent?

“The duration of the bonds has been asked about quite a bit. The property tax is 20 years. If it were to be renewed, it would be taken back to a vote of the people, The sales tax is permanent but could be repealed at any point in the future. However, the bonds that are taken out against this tax would have to be paid off before the repeal could take effect. I know the language on this proposal is a bit confusing so this is how I best know to describe it,” said Ross.

Will new roads be built or land purchased by the city?

“Simply put, we have no plans to use these funds to build new roads. We are focused on repairing the roads we have now. As for buying property. Originally there was thought we might need to purchase a few feet on Harper. However, we have since learned that we should be able to complete that stretch of road without purchasing land. We don’t have any indication we would need to purchase any other land for the project. There is standard language that would allow us to purchase but this is simply to give us flexibility in the event an unforeseen issue were to arise. An example would be the need for a few additional feet somewhere. We would not be looking to buy large parcels. In the same spirit, imminent domain has never been used in Choctaw and will not be used now.”

Will the money be used for beautification?

“People were concerned about a landscaped median planned for Harper. As our engineering consultant said, it would simply be a small median used to protect cars in a turning lane. Basically a small cut out with some gravel/stone on top. Very low maintenance. It would not be any sort of large, decorative median with plants, trees, etc. This project is about the infrastructure and repairing of our roads. This money will not be spent on beautification projects or design concepts seen in other plans. We would love to pretty things up eventually, but right now we are focused on just the roads.”
The engineering firm contracted by the city took time to go over core samples and plans for Choctaw’s roads.
“Typical communities either paint as many streets black as possible, target a few areas and overkill it, or just do something in the middle. Making all the streets black makes people happy for now, but a thin layer lasts three to five years. Most cities choose to spend too little or too much on the streets. That’s not being a good steward of tax dollars,” said Brandon Wall, with Wall Engineering.
“What we’re seeing this city do is more like what you see a transportation department do. Instead of under designing, over designing or guessing somewhere in the middle they’ve done the studies and now we can engineer the proper base and asphalt as needed in different areas. What they’ve done is proven to be the best steward of tax payer dollars, and ensure we put exactly the asphalt needed where it’s needed.”

Brandon Wall, with Wall Engineering, explains the condition of Choctaw’s roads based off of core samples taken throughout the city. (Photo by Jocelyn Horton)

Wall said he’s never seen core samples like those taken in Choctaw, and no two were the same throughout the city.
“We’re surprised the streets are in as good of shape as they are with what’s underneath some of these,” said Wall. “They’re horrible, to put it mildly. Mill and overlay is the cheapest option, but that will not work here. You’ll have massive failure, and waste a lot of money.”
City officials said that’s why the proposed plan is to provide funding for professional outsourced road reconstruction and not just repairs. Officials say the current budget only allows for patch jobs on the existing and poorly constructed roadways.
Ross went on to explain the average tax increase to a household would be comparable to the monthly cost of a hamburger, fries and Coke. He encouraged citizens to visit the city webpage that has over 400 documents and instructions on how to calculate how the new taxes would affect residents.
“How many of you have blown a tire or bent a rim in a pothole? The cost of this will be much less to have nice roads to drive one,” said Ross.
The video from the Jan. 14 meeting can be found on the Choctaw Area Chamber of Commerce Facebook page.
The two ballot questions will go before registered voters within the city limits Feb. 11.
The current proposal, broken down into two separate ballot questions, would provide the city with an estimated $40 million in dedicated funding for roads over the next 25 years.
The first proposition calls for the city to take on general obligation bonds in a sum not-to-exceed $13 million. The second proposition will request voters to approve a new three-quarters of one percent excise tax.
An informative webpage has been put up by city staff to help inform the public about the upcoming Feb. 11 election. The page can be found by navigating to Home>Residents> February 11, 2020 special Election at mychoctaw.org.