Voters will soon have the opportunity to determine how the City of Choctaw moves forward with road repairs.
A Feb. 11 election will determine if residents wish to continue ongoing practices of road repair efforts or if they’d rather kickstart a new era of road management focused on reconstruction. 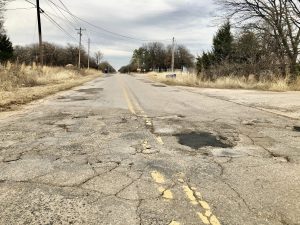 Indian Meridian Road just south of SE 29th Street is just one of the many areas in Choctaw that city officials say needs to be completely reconstructed. (Photo by Ryan Horton)

The current proposal, broken down into two separate ballot questions, would provide the city with an estimated $40 million in dedicated funding for roads over the next 25 years. However, the plan is designed to provide a long-term solution as funding would continue and additional projects would be completed allowing for the eventual improvement and maintenance of all the city’s 127 miles of roadway.
The first proposition calls for the city to take on general obligation bonds in a sum not-to-exceed $13 million. The second proposition will request voters to approve a new three-quarters of one percent excise tax.
Three years ago Choctaw hired Ed Brown as city manager, and some of his first work was to inventory city assets, infrastructure and financials.
He says it didn’t take him long to see a serious problem with the condition of city roads, and the funds available for needed road repairs.
A study would soon report that Choctaw needs about $400 million in road repairs citywide, while only having about $2 million for the annual operating budget.
Brown informed the City Council that a major change would be needed to allow for the city to catch up with current infrastructure needs and to move Choctaw forward.
The work leading to the two election propositions officially began back in May when a citizen-driven task force was started to do in-depth research on local road issues and come up with possible long-term solutions.
Being supported by two city councilmen and city staff, the mayor’s road task force formed three subcommittees, made up of citizens, to develop a plan for permanently fixing Choctaw’s road problems.
“When I first heard of a task force being organized to solve the crisis we faced regarding roads in Choctaw, I requested that I be a part of this group to advocate on behalf of our schools. It was important that this task force addressed the concerns of parents who struggle daily to drop off their children safely because of a lack of turn lanes into our schools,” said Choctaw-Nicoma PArk Superintendent Dr. Jim McCharen.
“The time is now to continue your investment in our children in the form of better roads and traffic flow improvements.”
Once the plan was finalized a town hall meeting was hosted, and city officials took many opportunities to speak to clubs and organizations throughout the community.
Additionally, an informative webpage was put up by city staff to help inform the public about the upcoming Feb. 11 election. The page can be found by navigating to Home>Residents> February 11, 2020 special Election at mychoctaw.org.
City staff and have continued to address concerns and questions sent through that site.
“We as a council have listened to your concerns. We called for an outside engineering firm to evaluate. We asked for citizens to bring input on how to move forward. We have agreed that all of this work will be bid out to professionals. We want to do this the right way,” said mayor Randy Ross.
If proposition No. 1 is approved, city officials say a 6-mill levy would be the target to accomplish this portion of the road project funding.
The tax would be added to the property taxes of homeowners in the city. For example, a 6-mill levy on a $100,000 home with a homestead exemption would result in property tax increase of $60 per year, or $5 a month.
The long-term plan would have the city returning to the voters sometime in the next 10-15 years to authorize additional bonds that would be issued as the older bonds are paid off.
The second proposition will request voters to approve a new three-quarters of one percent excise tax.
The new sales tax (0.75%) would go strictly toward constructing, improving, repairing and the maintaining of streets, roads, alleys, bridges and sidewalks.
The proposed new sales tax is meant to be a permanent increase intended as a long-term solution for road repairs  and improvements, but the tax could be undone later with similar action by the City Council and a vote of the people.
If approved, the sales tax rate in Choctaw would go from 8.75 to 9.5 percent.
Citizens will cast their ballot at their usual voting location Feb. 11.

I’ve lived in Choctaw for 60 years.  Let me use that vantage point to offer a perspective on our roads.  As kids we used to watch the road grader drive by smoothing the sand.  We would play in the fresh dirt.  Choctaw was ‘country’ then; maybe 3 cars would pass on any given day (Reno and Indian Meridian).  When it rained a lot, my older brother would bring out the farm tractor to pull the school bus out of the ditch.  Roads were a mess.
A few mile sections were gravel, even fewer were paved.  We knew every bump by heart as we bicycled 10-15 miles to ‘gather the gang’ on those long summer days.  Around 1970 the asphalt machines arrived.  Dad, a veteran of World War II, came from a farming community.  He watched; and complained about the way the roads were being built.
“These roads won’t last” he would say, “they aren’t building up the base or putting on enough asphalt.”
If you see the picture of the random cores drilled by the engineers to determine what shape the roads are really in, it shows Dad was right.
Too little aggregate (the gravel they mix in), and thin layers plastered over thin layers.  Looks good for a while; looks like a new road.  But like Dad said, it won’t last.  When the new layers do not bond together with the previous, water migrates in between, freezes and expands; those type of ‘fixes’ turns the road surface into those potholes that seem to chase your car.
Don’t get me wrong, we were happy to ride bikes on them, we were happy the bus didn’t slide into the ditches and get stuck.  Choctaw was small then, we qualified for Oklahoma County help, and we had friends in the government.  Those roads were built with Other People’s Money.  And we were happy to have them.
But like it or not, Choctaw is too big for County help anymore.  Now we need to get the roads built correctly; with Our Own Money.  Like Goldilocks, we have 3 choices.  We can do what the County did; it’s cheap, looks good, and won’t last.  We can pay for solid engineering advice, vet the process through public meetings, and trust our city government that, although suffering from growing pains, has not failed in their effort to lift us from the ‘small town’ government mistakes of the past, or we can do nothing and complain about it incessantly.  Only now, we’ll only be able to blame ourselves.
I wish Choctaw was still that sleepy town of yester-yore.  I also wish past city managers were a little more forward thinking.  But those things are paths that are no longer available.  Choctaw must get started on better roads.  Ed Brown, our city manager, has a past filled with success, a present filled with due diligence, and a future plan in mind for Choctaw.  The plan is to begin the process of constructing roads properly; there are over 120 miles of them.  Knowing the new surfaces will last 3 or more decades provides the vital ability to accurately plan and budget Choctaw’s future.  Best to start it now and do it right.

Choctaw Community Members,
In just a matter of days, you will have the opportunity to move Choctaw forward with your vote to properly repair and improve many of our city roads.  I am approaching this opportunity from a school safety issue.
As Superintendent of Choctaw-Nicoma Park Schools, it is my responsibility to ensure the safety and security of our children daily, and it starts with them getting to and from school.
When I first heard of a task force being organized to solve the crisis we faced regarding roads in Choctaw, I requested that I be a part of this group to advocate on behalf of our schools. It was important that this task force addressed the concerns of parents who struggle daily to drop off their children safely because of a lack of turn lanes into our schools.   It was important to recognize that our teenage high school drivers heading to the high school should be able to focus on driving without fear that an oncoming vehicle may be swerving into them while avoiding potholes.  It was important that this group find a solution so that our bus drivers can spend their mornings and afternoons driving on roads that do not rattle and shake our students the entire duration of their trip because of potholes and uneven roads. I have witnessed accidents and multiple near-accidents around our schools and on our bus routes because of the lack of turn lanes and/ or bad roads.
My job is to support what is best for our students and put their safety first.  The western part of the Choctaw-Nicoma Park School District lies within the boundaries of Midwest City. Our students, bus drivers, and patrons in the western part of our school district drive on these Midwest City roads. There is a world of difference in the condition of the Midwest City roads compared to our Choctaw roads. We need to improve our Choctaw roads to those standards. Our students, bus drivers, and patrons deserve to drive on excellent roads just as they do in the Midwest City area of our school district. Tax dollars going toward turn lanes and other improvements on roads frontingWestfall Elementary, James Griffith Intermediate, Indian Meridian Elementary, Choctaw Elementary, Choctaw Middle School, and Choctaw High School are well worth the investment.  It is worth allowing our bus drivers to give our kids a safe and smooth ride to and from school each day.
Our school district has seen the benefits of a community investing in itself.  The school bond issue passed by communityseveral years ago allowed us to build and repair facilitiesmaking Choctaw-Nicoma Park Schools on par with other 6A school districtsin regards to facilities and technology.  The bond issue allowed us to build two new schools, safe rooms, additional classrooms,an incredible performing arts center and other fine arts facilities, and top-notch athletic facilities.  The time is now to continue your investment in our children in the form of better roads and traffic flow improvements.
As you have trusted me for nearly two decades to lead our school district, I am asking you to trust our city officials and community members who have put this plan together and give them your support for better roads on Tuesday, February 11th!