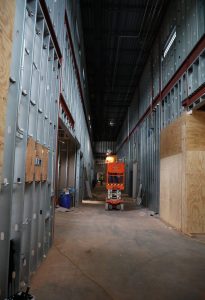 Crews work on a hallway inside the Schwartz Elementary School addition. (Staff photo by Jeff Harrison) 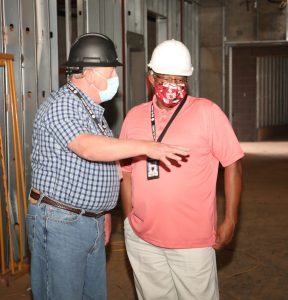 Construction crews are making steady progress on a project that will expand and redefine Schwartz Elementary School.
Mid-Del Schools is building an addition that will include eight classrooms, a music room, gymnasium, a storm shelter, and administrative offices. The $9 million addition is being built north of the current school building. The main entrance and new parking lot will be added along Anderson Road.

“The current building is right up against the intersection and this addition allows us to build a new addition that is much safer and a lot more aesthetically pleasing,” said Mike Bryan, executive director of operations for Mid-Del.

A new hallway has been added to connect the existing building with the new one. It is designed with sight lines to allow faculty to see from one building to the other, to increase security.
Principal Rondall Jones plans to move the lower grades to the new building. Students in grade 3-5 would stay in the existing building.

The addition will provide much needed classroom space for Schwartz Elementary, which is in the fastest growing areas in the school district. The school has about 330-350 students per year. The project is designed to eventually incorporate a second phase that would add additional classrooms and cafeteria.

“This is an exciting time for this school site because they really needed this addition,” Bryan said. “This is where most of the growth in the district is. There are a lot of new homes going up and this will be a modern school.”

CMS Willowbrook is overseeing construction of the Schwartz addition. Crews started work at the school in August and are expected to complete it by late 2020. Officials estimate the project is about 70 percent complete.

The Schwartz project is part of a larger $130 million bond issue approved by voters in 2017. The bond issue includes additions at Kerr and Monroney middle schools, renovations of the high school football fields, and others.