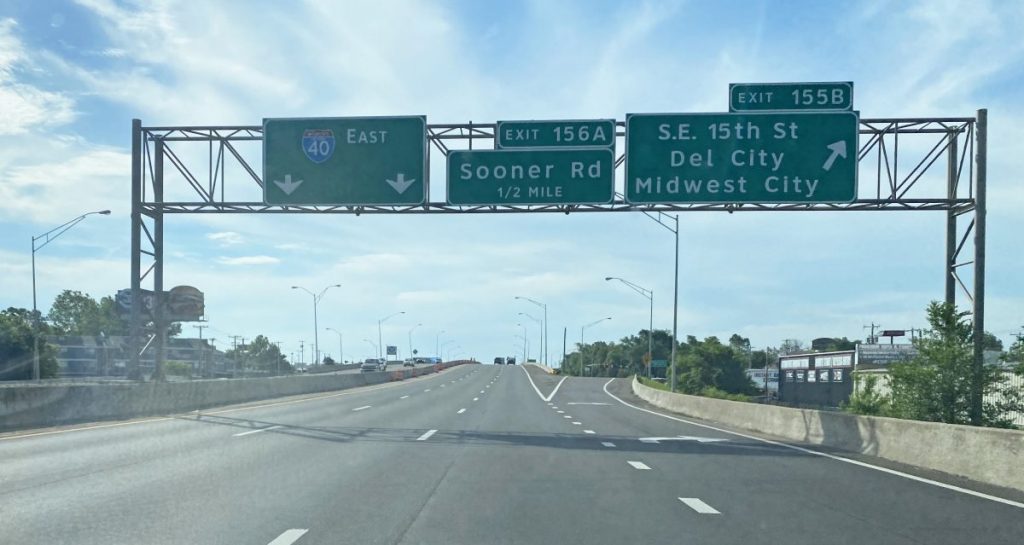 ODOT awarded a nearly $80 million contract to Manhattan Road and Bridge Co. to reconstruct I-40 bridges over Crutcho Creek, SE 15th St. and Sooner Rd. The project is expected to start in late summer and take about 2 1/2 years to complete. (Photo by Jeff Harrison)

The I-40 project includes reconstruction of six bridges and approaches at Crutcho Creek, SE 15th St. and Sooner Rd. Five of the six bridges have been deemed “structurally deficient” and required constant maintenance and emergency repairs due to condition and age.

“Those bridges are some of the worst that we have anywhere on the interstate and we are really looking forward to getting that project under construction and getting those bridges replaced with brand new infrastructure,” said ODOT executive director Tim Gatz during the virtual meeting.

Manhattan Road and Bridge Co. was awarded the construction contract with a base bid of $74,787,605, which was about 7 percent below the state engineer’s estimate. The contractor estimated it will take 809 days for substantial completion, which was 131 days less than state estimates.

The contract includes nearly $2 million worth of incentives for early completion and funding for inspections.

“Time has an extremely high value for this project and they (Manhattan Road and Bridge Co.) are planning innovative ways to get it done faster,” said Terri Angier, ODOT spokesperson. “That can mean sequencing the design and sometimes it means more manpower and equipment.”

Sherwood Construction and Allen Contracting also bid on the project.

Construction is expected to begin late this summer and take 2 ½ years to complete. Drivers are expected to see significant traffic disruptions during the work. Traffic on I-40 will be narrowed to two lanes in each direction for the duration of the project. Additional lane closures could be necessary during evenings and weekends.

“We ask the public to be patient with us as we execute the construction project, and more than anything, please be mindful in those and every construction work zone on your travels,” Gatz said.

In preparation for the major bridge projects, ODOT resurfaced the roadway between I-35 and Sooner Rd. The project will help prepare the surface for heavy traffic and limit additional closures once the bridge reconstruction work starts in the summer.

The bridge project has been on ODOT’s plans for more than two decades, Angier said.

“This is a good news days for commuters, especially those in eastern Oklahoma County,” she said. “We have been anticipating this day for 25 years and never had the funding. And it’s finally here today.”

ODOT had planned to award the construction contract at the April meeting, but delayed it due to technical issues. Officials said two of the companies that bid on the work were not able to upload the necessary documents to the state website. They were not sure what caused the error, but believe it may have been due to COVID-19 and the high number of employees working remotely.

Nearly 90,000 vehicles travel this area eastbound and westbound daily, on average, according to a 2018 traffic count.