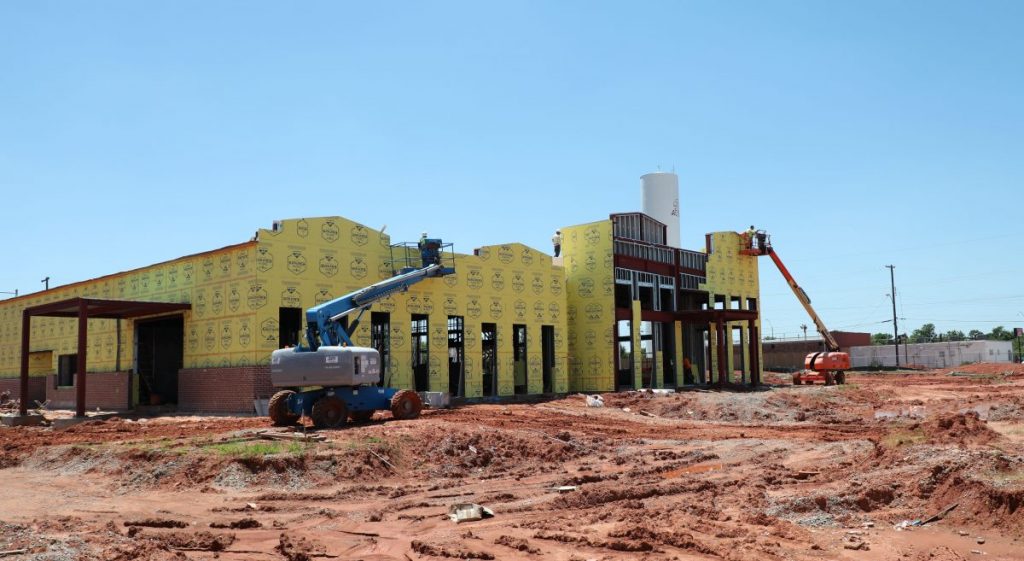 Crews work on the exterior of the new Del City library at 4330 SE 15th Street. The 15,000-square-foot building is expected to be complete by the end of the year. The library is slated to open in spring. (Photo by Jeff Harrison)

Work began in December and has stayed on schedule throughout the winter and spring. Crews have completed the exterior walls and roof and are working on brick facade and interior framing.

“They had some delays with rain, but they have worked some overtime and weekends and they have caught up,” said Del City Mayor Floyd Eason. “This will be a jewel in the Metropolitan Library System.”

The 15,000-square-foot library will be located at 4330 SE 15th Street, just a short walk from the current library inside the community center. The library will be more than twice the size of the current one. It will have separate areas for children and adults, a large computer area, meeting rooms, a drive thru drop-off area, among others.

“We have doubled the space and most of the extra space will be used for study rooms, meeting rooms and the electronic area,” Eason said. “There were 4,000 books in the old library and this one will have about the same.”

The children’s area will be in the northeast corner of the building. It will include space for group story time and presentations, a covered outdoor area, and separate bathrooms.

The breakroom will double as a saferoom for employees.

The new library building is expected to be completed by the end of the year. Eason said it will likely take a few months to get it set up and materials relocated and expects a spring opening.
As part of the new library opening, Eason said they are planning a ceremony to relocate the last book in the collection. He said they will form a human chain from the old library to the new one and pass the History of Del City book across the way.

“The History of Del City will be the last book over from the old library to the new one,” Eason said.

The current library will be converted into a senior citizens center.

The library sits on the site of a former bowling alley. The city bought the land several years ago and demolished the old building. The city also plans to demolish a building, just west of the library at 1622 S. Sunnylane Rd. that it acquired. Eason said they hope to develop the land or use it for the library.

“We could have some type of restaurant or retail operation there or leave it as an open space and entrance to Sunnylane Road, but we haven’t decided on that yet,” Eason said.

Del City’s first library opened in 1961 in a two-bedroom house owned by the city. In 1965, the Del City library joined the Metropolitan Library System serving all of Oklahoma County. As the library’s collections grew, the city opened a new building at its current location at 4509 SE 15th Street in 1966.

The library is funded through a 1 ½ cent sales tax.

Jenco Construction is the general contractor for the library project.