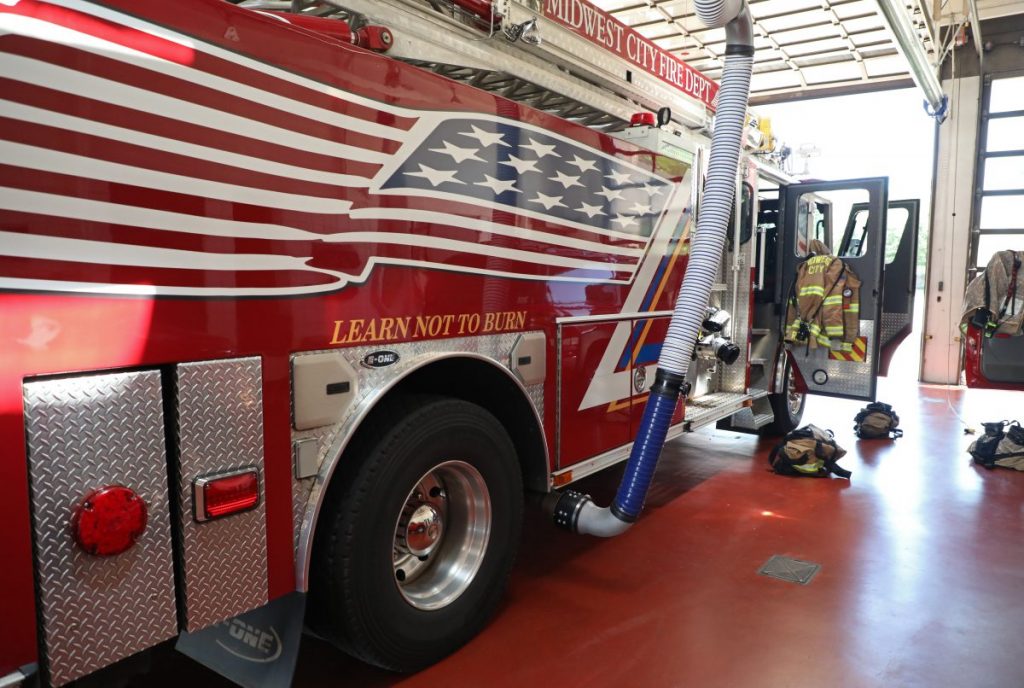 The Midwest City Fire Department has installed exhaust removal systems at all five fire stations. The system connects directly to the fire trucks and removes harmful toxins from the air . (Photo by Jeff Harrison)

Midwest City firefighters are better equipped to protect residents and themselves thanks to a 2018 general obligation bond issue. 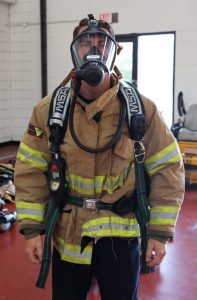 The $53 million bond package included more than $3.7 million for equipment, vehicles, and facility upgrades for the fire department.

So far, the fire department has replaced its self-contained breathing apparatus, installed vehicle exhaust removal systems for all fire stations, and received a new shift commander vehicle.  A new fire engine and ladder truck and mobile air tank refilling unit are due later this year.

A police and fire training facility and a fire tactical training building will be built as part of phase three. Fire Station No. 1 will also be remodeled as part of the bond issue.
The SCBA project included replacing all the SCBA, masks, air bottles, fill stations and other equipment.

“These have better safety features and they brought us up to compliance with the National Fire Prevention Association standards,” said Chief Bert Norton. “We were about three standards or 12 years behind.”

The new SCBA feature upgraded microphones that connect to radios, thermal imaging camera and a tracking feature. The bottles are labeled to avoid getting mixed up with other agencies during combined responses. And the new masks glow in the dark to better identify firefighters on scene.

They were purchased for about $436,000 with a combination of GO bond funds and a federal grant.

Exhaust removal systems have been installed at all five fire stations to reduce exposure to hazardous contaminants linked to cancer. The system includes a hose that connects to trucks parked inside the station. They automatically turn on when the truck starts up and sucks out the exhaust and disconnect when the truck pulls out of the station.

“Almost all of our stations have living quarters on the second floor, so this will reduce the exposure to firefighters,” Norton said.

The fire department received a grant for an exhaust removal system at Station No. 1 several years ago. That system was upgraded and new ones were installed at the other four stations at a cost of about $224,000.

Norton said they are also working on purchasing new hoses and nozzles which are part of phase one. The upgraded equipment allows more water to be sprayed on a fire.The Station No. 1 remodel and new training facility construction are expected to begin next year.

The GO Bond was approved by voters in 2018 and included funding for public safety, parks and recreation, streets, and the water system. The funds are separate from the city budget and can only be used for dedicated purposes.