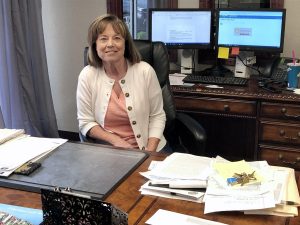 Choctaw Police Chief Kelly Marshall works in her office, 13240 NE 23rd St. She says her office is open for residents to visit with concerns, questions and conversation. (PHOTO BY RYAN HORTON)

Choctaw Chief of Police Kelly Marshall will be hosting an informal “Coffee with the Chief” event June 30 at Harley’s Café.
The event will be 7 to 8:30 a.m. at 14013 NE 23rd St.
“I’ll be there if someone wants to come in and talk,” said Marshall.
“This is something I’ve wanted to do since I came here. This is something a lot of police departments have started doing, and it really lets the people in the community get to know our officers. Sometimes the only interaction our officers have with citizens is when they come out to take a report or something really bad has happened.”
Marshall hopes to expand the relationship of the police department and community, and also let residents know they can bring any concerns or questions to her directly.
She hopes to have a similar event, at least once a quarter, in different locations and times of day throughout the city.
“I hope to have a variety of times available so people can just stop in after work or on their way to work and have a chat with myself or an officer,” said Marshall.
Marshall says she’s in her office almost every day, and the public is also free to visit her during that time.
“A lot of people don’t realize they can just come in and ask me a question here at the police department. I’m around most of the time,” said Marshall. “There’s not a lot of public meetings here that I can go to and speak to the public, but I’m open to attend any of those also.”