By a vote of 5-2 city leaders elected to amend Ordinance No. 820-2020, and also passed the accompanying emergency clause. 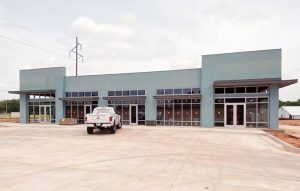 Newly constructed commercial metal buildings, similar to that recently built at Choctaw Road and SE 15th, must have a facade covering at least 75 percent of the street facing exterior wall. The recent City Council vote expanded this existing commercial rule citywide, and also added similar restrictions to agricultural and non-personal primary buildings built in residential areas. The change does not apply to accessory, secondary or building addons.

“We are not trying to address exterior standards for residential properties,” Development Services Director Guy Henson told councilmembers before the vote.
The added ordinance section was intended to provide aesthetic guidelines for construction of new commercial and agricultural metal buildings when utilized as the primary structure in all zoning districts except light industrial and heavy industrial.

“This only applies to new construction of primary metal buildings. This does not apply to new accessory buildings. We didn’t want this to have any effect on existing structures that do an addon so we made this only applicable to new metal buildings,” said Henson.
The new section specifies that any newly constructed primary structure for commercial use must have a façade covering 75 percent of the front (street facing) wall.

Additionally, any newly constructed primary building for agricultural or non-personal use in a residential-zoned area must have a façade covering 50 percent of that front wall.

The section reads that the façade must be brick, rock, stone, cementitious fiberboard, stucco or other materials approved by the Development Services Director to cover the required percentage of metal on the street facing exterior wall.

The façade requirement for metal buildings only applies to the primary structure on a property. Accessory buildings such as sheds, shops and garages are not affected.

“This will expand the zoning requirements already in place in the city’s commercial areas like the Markets at Choctaw and on Harper to the rest of the city. This will make our commercial building standards uniform throughout the city,” said Mayor Randy Ross. “No one is restricted on metal buildings being built on residential property that is being used for personal use. In the event a metal building is being used for non-personal use like a school or business on residential property, they would be subject.”

In other action during the June 23 special meeting of the City Council officials voted to amend the Choctaw Code of Ordnance regarding inoperable motor vehicles.
City officials say the amendment was to improve the clarity of the existing rules and regulations for a better understanding of both city code enforcement and citizens.

“This eliminates reference to inspections, which are no longer required, and also the reference to state and federal minimum safety standards,” said Development Services Director Guy Henson.
The action was questioned by citizens in attendance concerned with stricter guidelines for part and project cars within the city.
However, officials say the amendment did not change any guidelines, but instead made the existing rules clearer for city staff and residents.

Among edits to the existing ordinance was the removal of the word “derelict” in reference to inoperable vehicles.

The ordinance still reads that no person shall park, store, leave or permit the parking, storing or leaving of any inoperable vehicle or major components thereof, whether owned or possessed by such person or others, upon any public or private property within the city for a period of time in excess of 30 days.

The ordinance does call for exception with an inoperable vehicle being stored in a building, behind a sight proof fence or completely covered with a snug-fitting car cover.
City officials say inoperable motor vehicles are the second most reported code violation in the city behind high grass and weeds.
Officials say with only one code enforcement officer to cover the entire city limits, a lack of past citations does not mean inoperable vehicles have been in compliance.

The entire Choctaw Code of Ordinance is available on the city website, mychoctaw.org.