The race for Oklahoma County District 2 County Commissioner has narrowed setting up a November general election.
With all precincts reporting, results showed incumbent District 2 County Commissioner Brian Maughan defeated Republican challenger Jim Fisher in a close June 30 election.
Maughan captured 8,381 votes (54.35 percent), while Fisher had 7,039 votes (45.65 percent).
Maughan will face Spencer Hicks, a Democrat, in November.
Maughan, 43, has been in office since 2008 and decided to run again after SHINE, a nonprofit he started to help individuals with nonviolent charges, was cleared in a financial investigation done by the county. 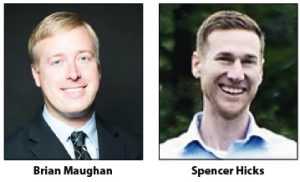 If elected, Hicks, 39, hopes to address transportation issues, further efforts to reform the county jail and improve government transparency and collaboration.
“The city and county levels of government are where things actually happen that affect our lives,” said Hicks.  “I think the best way to effect change is to be part of that level of government and really get in there and try to fix things.”
District 2 covers the southern portion of Oklahoma County, wrapping from east to west, including Choctaw and Harrah with communities as far west as Bethany.

Court Clerk Rick Warren, a Republican, will be against Charles de Coune, a Democrat, in the Nov. 3 general election.