“I don’t want to be the guy to tell a 21-year-old what they can and can’t do,” said mayor Larry Fryar.

The discussion of the City Council echoed that line of thought as Harrah leaders expressed no interest in having rules and regulations that are stricter than those put in place by the state. 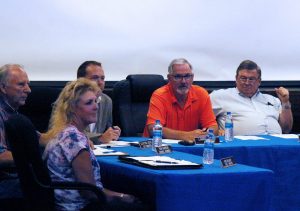 The Harrah City Council discusses the possibility of putting in place COVID-19 pandemic mandates at a municipal level. (PHOTO BY RYAN HORTON)

The city attorney reminded the council that any state mandate would take precedent over a charter city’s actions regarding the ongoing COVID-19 pandemic.

“I don’t think it would do us any good to adopt an ordinance, despite what the state does,” said Harrah city attorney Robert Thompson. “Right now, the governor is refusing to implement a statewide order, and hopefully he continues to do that.”

If a statewide order was put in place, such as face mask requirements or shelter in place, state police could be tasked with enforcing such orders within the city.

Similarly, if a countywide order was put in place, the county sheriff’s office could be responsible for enforcing such orders in the area.

The discussion in Harrah came three days after the Oklahoma City Council approved an ordinance, by a 6-3 vote, to require persons age 11 and up to don face coverings for their noses and mouths in all indoor public spaces. Among the few exemptions in OKC are offices with no face-to-face interactions, diners while eating and drinking, those engaged in sports or cardio exercise, and those who are deaf or hard-of-hearing.

At the time of the meeting Harrah had 25 reported cases of COVID-19 and 24 of those patients had already recovered, according to the Oklahoma State Department of Health.