The use of biosolids as fertilizer remains a controversial issue within the City of Choctaw.

A year ago, Choctaw city officials voted unanimously to amend the code of ordinances, prohibiting the spreading of solid human waste within city limits.

Five months later, officials modified the law, still prohibiting sludge, but allowing for the use of a more refined Class A biosolid fertilizer.

Then June 23 of this year, the City Council voted (7-0) to reauthorize the spreading of solid waste, from waste water treatment plants, in agricultural zoned districts provided that the sludge is not spread within an eighth of a mile of a neighbor’s residential structure.

However, neighbors of farmers that recently used biosolids say that eighth of a mile distance restriction isn’t enough to protect them from side effects of the fertilizer.

As passed initially, the city ordinance, declared the spreading of solid waste, from a wastewater treatment plant, a prohibited nuisance. Personal compost and aerobic septic systems were not affected, but Choctaw residents were prohibited from using solid human waste, provided by treatment plants of other cities, as fertilizer.

The city’s apparent flip-flopping stance over the last year was the result of influences from complaining citizens, impacted farmers, meetings with the Oklahoma Department of Environmental Quality and legal counsel. 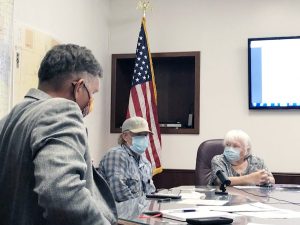 The last two regular City Council meetings have once again had residents bringing up the issue of biosolids during public comment, and now the City Council is considering once again taking on an agenda item to address the issue.

The initial ordinance was drafted following public complaints about safety concerns, the smell and flies around areas of application, and those complaints have resurfaced after a late June application of sludge to farmland in the north McDonald Road area of Choctaw.

“I was here when they first started putting on the sludge. My heat goes up 10 degrees in my house from lighting candles trying to get rid of the stink. We kill 200 flies a day inside our house,” Todd Limke told the council at the Aug. 4 meeting. “They want to call it sludge. You can put lipstick on a pig, but it is nothing other than human waste being put on fields.”

He was joined by several other neighbors echoing the same complaints and concerns.

Additionally, those in attendance to oppose the use of biosolids voiced their belief that the city misstepped in amending the ordinance passed last July.

“I’ve got a video of over 2,000 flies we caught in 24 hours. I spent $500 on an exterminator to spray them. We can’t go outside. Everything we have is covered in flies. I wish them success in farming, but there’s ways to handle this without compromising all of us,” said Jeffrey Sleeper. “From what I understood, this wasn’t going to happen. That’s why everyone is here griping, because we thought this was shutdown. I understand they’re saving money, but everyone here has spent plenty of money trying to get rid of these flies. It’s costing us in the long run.”

Since the issue was first addressed, citizens operating farm land within the city limits spoke up to city officials with concerns the restrictions would directly and negatively affect their livelihood.

The use of biosolids reduces a farmer’s production costs and replenishes the ground’s organic matter.

Those farmers had previously stated to replace the DEQ managed and free Class B sludge fertilizer with purchased animal fertilizer could potentially add $50,000 in operating expenses annually.

Local farmers argue the federally regulated sludge spreading service is safe, increases the soil quality of farmland, and will continue on nearby land outside the Choctaw municipal limits regardless of what happens to farmers residing within city limits.

Those farmers in attendance speaking for the use of biosolids, say they made their annual application three weeks before last Tuesday’s meeting and are already seeing record production of quality grass for feeding their Black Angus cattle.

“There aren’t very many of us left as people are moving out to the country more and more. I’m proud to be a fourth-generation farmer out on our ground, and we take a lot of pride in what we do. We work, we work hard, and we care. We would never do anything to damage our ground,” said Phillip Webb.

“The biosolids that are used as part of our program have been used for several years. We have places that need fertilizer placement. They test the soil, and it’s regulated. This is a one time a year application, if needed. If it doesn’t need it, it doesn’t get it. It takes a long time to get your soil back into production, but we’re now seeing good productivity as our land comes back.”

The longtime area farmers say they’re proud to be a part of the Choctaw community, and don’t appreciate recent insults and threats made by those in opposition of the use of such fertilizer.

“We always try to be good neighbors and good stewards. We tend to our business, and expect everyone else to tend to theirs,” said Webb.

City manager Ed Brown says a discussion could be put on the Aug. 18 City Council agenda.