Chief Robert Williams, Police Chief of the Town of Jones City, is excited that Fire House Subs presented the department with a $15,000 grant.

With those funds the Jones PD was able to purchase approximately 20 outfits of soft body armor (bullet proof vests), enough for all the Jones fulltime and reserve officers. 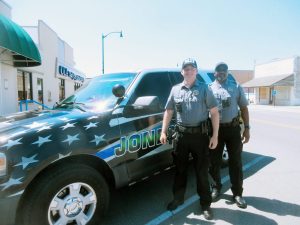 Chief Williams recently returned from the Eastern Oklahoma County Chief’s Conference hosted in Ada. They also held a CLEET training at that center. This is the Council on Law Enforcement,

At this time they are planning on developing a Police Training Center at 44th and South Bryant in the Metro area.  There is also consideration for a dispatch center, which would enhance law enforcement for the smaller communities and make things more accessible to the local departments.

In the future Shawnee is looking to having their own Academy for Police Officers.  Most all communities are looking to hire police officers as many have retired as well as several Chiefs in the state.

Chief Williams is hoping that they will be able to set up information weekly or monthly informing the local residents on ideas for their communities on self-protection.

The Jones Police Department is growing and making many changes in their community to better serve and protect their residents.  They are also looking forward to getting new radios in the near future. 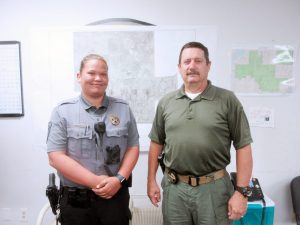