The Oklahoma Department of Transportation is replacing six I-40 bridges in the Mid-Del area, five of which are structurally deficient. The bridges over Crutcho Creek, SE 15th St. and Sooner Rd. have all required significant maintenance in recent years, including several emergency repairs. 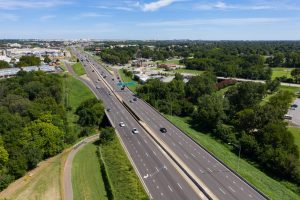 The Oklahoma Department of Transportation announced that construction will begin Tuesday, Sept. 8 on the I-40 bridge project in the Mid-Del area. The $80 million project includes replacing six bridges over Crutcho Creek, SE 15th St. and Sooner Rd. (Photo provided)

The $80 million project begins on Tuesday, Sept. 8 and is expected to take about 2 ½ years to complete.

The project will significantly impact travel in the area. Crews will begin work on the eastbound lanes. Eastbound I-40 will be narrowed to two lanes with intermittent ramp closures at Sunnylane Rd., SE 15th St. and Sooner Rd. Motorists also can expect I-40 to be narrowed to one lane at times on nights and weekends, as needed, as well as significant ramp closures during the project.

The speed limit will be reduced to 45 MPH throughout the construction zone.

“They will start on the outside lanes and shoulder of the eastbound lane and the westbound side will not be effected for a few more months,” said ODOT spokeswoman Terri Angier.

Drivers are encouraged to find alternative routes such as I-240 or NE 23rd St. /State Highway 62.

The new bridges will be larger than the current ones and are designed to incorporate into future projects on I-40. ODOT plans to reconstruct the Douglas Blvd. interchange as well as bridges at Scott St. and Sunnylane Rd. in Del City. The state is working with local cities and Tinker AFB in developing a plan to reconfigure I-40 and service roads between Sooner Rd. and Douglas Blvd.

“We’re adding more capacity on the bridges so they are up to standards and we’ll have the flexibility to connect them with future projects,” Angier said.

The project also marks a big step in the state’s 15-plus year effort to improve its state highway bridges. The state moved from 49th in the nation into the top 10 for bridge conditions. The I-40 bridges are some of the last remaining structurally deficient bridges in the state.

“These bridges have been the symbol of desperately needed improvements in the metro area and now are among the 86 remaining structurally deficient bridges on the highway system,” Angier said in a news release. “Restoring this corridor and lessening the number of disruptions to motorists for ongoing maintenance completes a long-term promise to the residents of eastern Oklahoma County and relieves a bottleneck to traffic heading to eastern Oklahoma.”

In June, Manhattan Road and Bridge Co. of Tulsa submitted the winning bid for the project. The project is scheduled to be completed by spring 2023. The contract includes $2 million worth of incentives for early completion.

The $80 million project is one of the top five most expensive road projects in state history.