Residents of the City of Choctaw may have noticed an increase on their most recent utility bill.

City officials say that is the new normal as Choctaw works to modernize operations.

The Choctaw Utility Authority has updated their fee structure and improved water meter accuracy, which for most will cause a noticeable change on monthly utility billing.

Earlier this year, while working with an independent analysis of the Choctaw Utility Authority fee schedule, city staff came to the realization Choctaw’s utility rates have not been set appropriately.

City manager Ed Brown announced there would need to be a utility rate restructure and increase for the coming budget year (2020-21), which began in July.

Brown announced the findings to Choctaw’s elected officials and the public through May and June meetings.

The changes to the fee structure were later approved along with this year’s city budget.

The city manager says an independent in-depth study of the city fee structure had been completed, and the analysis confirmed the CUA has not been charging sufficient rates and fees for services rendered.

Brown says the CUA is separate from the City of Choctaw, and should be operated like a business.

“The fees collected should be set at a rate to pay for current operations, save for maintenance and replacement of equipment and supplies, save for future expansion and recapitalization, and provide a return on investment to the shareholders (residents of Choctaw). Having lived the budget cycle for three years now, in the process of building a fourth budget, I have become well versed on the mechanics of the financial ecosystem providing funding for our City and Utility Authority,” said Brown back in May.

“The current utility fee structure for Choctaw, set almost six years ago, is based on 95 percent of the current fees set in the five surrounding cities which has no bearing on the actual cost of running the business in Choctaw. Prior to 2014 there had been no significant increase in rates. Sewer fees were set in a similar way over the last 23 years. As we watched the numbers it became readily apparent the business of utilities was not self-sustaining and currently does not provide for the items noted above to cover operations, recapitalization, and return on investment to the shareholders. What I observed was actually opposite—a portion of city tax dollars collected were and still are underwriting the Utilities Authority business. We need to fix this disconnect. The first step in fixing the issue is a proper fee structure. We need to save our tax dollars to run the city. We need to set use fees appropriately to run the Choctaw Utility Authority.”

The updated fee structure, that was approved with this fiscal year’s budget, was meant to begin July 1. 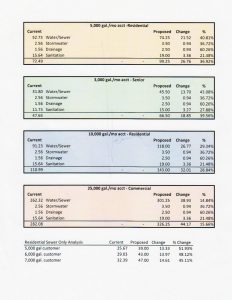 However, the process of adjusting utility rates caused a delay in billing changes until Aug. 1.

August through September billing reflects those water/sewer, stormwater, drainage and sanitation rate increases, and changes seen on those utility bills came as a shock to some residents.

City officials say raising rates is never popular, but the structure had to be adjusted to appropriately cover existing costs.

“There should be nothing political about running the business or raising fees in the structure. It is our job, not only to provide transparency, which there is plenty of, but also clarity, which we are lacking—by clarity I mean taking all the data we show you and communicating what the numbers actually mean to provide context and understanding,” said Brown.

The city had previously set utility rates and fees based off of what surrounding communities were charging instead of determining actual costs of operation.

“What Midwest City, Harrah and some other surrounding towns charge has nothing to do with what it costs us to do business. They have different amounts of water line, sewer line and do trash service differently,” said Brown. “When cities try to gradually do this, they end up further behind.”

Brown says the new rate structure will allow the CUA to cover its own operation, and allow for future improvements, expansions and emergency repairs without dipping into the city’s general fund.

Brown says the CUA only charging utility customers enough fees to pay salaries and make minor repairs has been costing taxpayers over half a million dollars per year with little to show for it.

“For three years I was watching money flow from the tax payer side over to the CUA. We shouldn’t be pulling $600,000 a year from the general fund,” said Brown. “We’re now going to charge enough to cover the cost of doing business. The city will keep that $600,000 a year of our dedicated sales tax that should be going toward roads and other things. We’ll also be able to start building a reserve that can go toward repairs and improvements as a return on investment to shareholders (tax payers).”

In addition to correcting the fee structure, Choctaw has also updated water meter reading which could add to visible changes on utility bills moving forward.

Brown says the city was previously giving away thousands of gallons of water per month to each meter.

“Another thing we did was we quit giving free water,” said Brown. “Meters in the past didn’t start reading until about 3,000 gallons. So, we were giving away that much free water per meter. The meters now read to the gallon. The cost of bringing water to the meter is $15 a month, and you’re paying for water after that. People were getting 3,000 gallons of water up front, and we fixed that. Before, if people were using 2,500 gallons of water, they weren’t paying anything. If you want to compare to other rural communities, Harrah and McLoud’s initial charge is $20.”

Brown believes the recent changes, while not popular, were needed to ensure the CUA trustees and city staff are being good stewards of taxpayer dollars.

“It’s going to be a paradigm shift for the citizens as we move forward to try and modernize what we’re doing,” said Brown.

More information on utility services and rates can be found at City of Choctaw Utility Information.