Each year before the football home opener Choctaw High School inducts a new class to the school’s growing Athletic Hall of Fame, Decades of Greatness.

Marissa Lightsey is a 2005 graduate of Choctaw High School. As a yellow jacket Marissa participated in both Basketball and Track and Field. Despite an ACL injury her Junior year of high school

Marissa was able to secure membership of the 2005 Track and Field Oklahoma All State Team as well as earn two individual state titles, seven individual regional championship titles, and four individual conference championship titles. Marissa went on to earn a scholarship to Oklahoma Baptist University where she finished as one of the most decorated track and field athletes in history. Marissa finished Oklahoma Baptist University as a 20-time All-American and a 14-time NAIA national champion to include two National team titles.
She is a second-generation Yellowjacket behind her father Kevin Edwards who along with his siblings, the Butler and Lambeth family integrated Choctaw High School in the late 1960’s. Marissa would like to first thank God for his constant covering and never changing grace. She would also like to thank her mother Selonda Moseley for her constant support in always setting a standard of excellence, her father for always lending his sound advice, her brother Andrew for always encouraging her to strive to be the best athlete she could, and her sister Latasha for always providing an encouraging word. Marissa also thanks her coaches Jay Reaves, Lindsay Brewer Smith, Albert Leal, and Ford Mastin (OBU) for their constant support, and mentorship while pushing her to get better everyday. Marissa has earned a Bachelor’s degree in Applied Communications from Oklahoma Baptist University and a Masters Degree in Human Resources from East Central Oklahoma.

She is now Executive Director of College and Career Readiness at the Oklahoma State Department of Education where she provides career readiness support to all 500+ school districts supporting all 700,000+ Oklahoma students. She is married to Travis Lightsey Jr. and is Mother to Isaiah 8, Xavier 4, and Kenya 18 months. 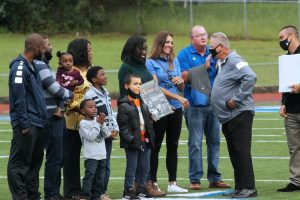 Julie was a 1991 graduate of Choctaw High School. As a senior led the Lady Jackets to a 14-10 record was named to the Western All-State team. She was 6th in the state scoring with 18.4 points per game, named as a player for the Big All-City roster and several tournament all-star teams throughout her high school career.

She traveled during the summers to play basketball with numerous AAU/USA teams playing in Florida, Louisiana, Georgia and Mississippi. Julie played college basketball for the Oklahoma Christian Lady Eagles after high school, making it to the Sweet 16 in the NAIA 1993 National Women’s Basketball Championship, Division I. Julie would like to thank Coach Ish Kaniatobe and Coach Rae Ann Jenkins for all the effort and hard work they put into the team and herself. I would like to thank my parents for always being there to support her in all her endeavors. Julie and her husband, Jason reside in Skiatook, OK where they have raised their son, Braiden and daughter, Ryleigh. Julie currently serves the Tulsa Fire Department as their Training Chief, and has been a member for 22 years. 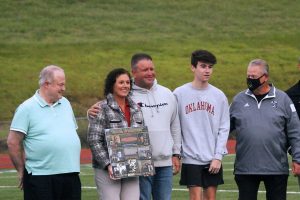 Josh is a 1996 Graduate of Choctaw High School. During his time at Choctaw High School he was a four year starter on the wrestling team, a four year State Qualifier for the state tournament, a three time State Placer, a two time State Champion and two time Outstanding Wrestler of the state tournament, compiling an overall record of 112 wins and 9 losses, including his final two seasons finishing each undefeated with 38 wins and no losses. He ended his high school career having been selected to the Oklahoma All State Wrestling Team in 1996 and earning a wrestling scholarship to Oklahoma State University.

While attending Oklahoma State University he earned an engineering degree and went on to earn a Master of Business Administration at the University of Oklahoma.
During his time at Choctaw-Nicoma Park Schools he learned the importance of giving back and the value of dedicating one’s time towards the betterment of others so that all may succeed, beliefs he has held throughout his lifetime. Based on these core beliefs, he currently gives his time serving as Vice President of the Choctaw-Nicoma Park Public Schools Foundation and as a Commissioner on the Long-Range Capital Planning Commission for the State of Oklahoma, having been appointed by Governor Mary Fallin.

The individuals that Josh would like to recognize today include Superintendent Dr. Jim McCharen, Principal Steve Beall, Principal Greg Skaggs, Counselor Walt Springfield, Teacher Mike Murphy and the many countless others who gave their time and energy.
He is also especially grateful and would like to give a special thank you to Coach Benny Coleman and wife Theresa, Coach Darren Peaster, Coach Larry Miller, Teacher Barbara Sanders, Superintendent Tom Williamson (and Family), Mr. Ken Williamson (and Family) and Mayor Randy Ross (and Family).
He is particularly proud of and would also like to recognize and give thanks to his family beginning with wife Jennifer Cruzan and three daughters, Stella, Sophie and Scarlett for their continued virtue, loyalty and support. In addition, he would like to recognize his Grandfather Ray “Grandpa” Standifer who can still be found regularly attending and supporting Choctaw Athletics around the state and beyond. Last, but certainly not least, he would like to recognize those family members who have passed or were otherwise unable to attend including Grandparents Eugene and Peggy Cruzan Sr., Grandmother Connie Standifer, Grandmother Joan “Josie” Standifer, Father Eugene “Skip” Cruzan Jr., Mother Keri Standifer, Cliff and Becky Bell and countless other aunts, uncles, cousins, brothers and sisters. 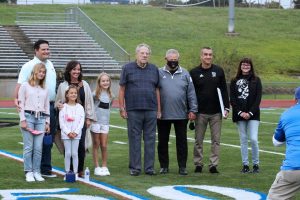 Diana Coleman Blankenship is being recognized for making All State in basketball, as a guard, at Choctaw High School, Class of 1974. In 1974, Choctaw played 6 on 6. She also played with the members of Choctaws 1972 State Champions.

Diana has one daughter, Tina Blankenship Smith, who graduated from Choctaw in 1997. Tina, an All State pitcher from Choctaw received a softball scholarship from East Central University and graduated in 2002. Tina is married to Kyle Smith and has two children Canyon and Blaiklee.
Coleman worked for the Choctaw Nicoma Park School Systems for 38 years and retired in a management position. Retiring from Choctaw Schools allowed Diana to take care of her ailing parents. In retirement, she loves spending time watching her grandkids, nieces and nephews play sports, working in her flower beds, traveling, and going on cruises (whenever available). 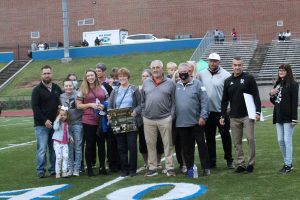 Wayne and his wife, Suzanne, graduated from East Central University in the summer of 1961. His former college roommate Jim Smith, brought him to Choctaw to meet Coach Bill Jensen, who hired him on the spot. Wayne and Suzanne began their teaching careers in Choctaw.

He was the 7th-9th girls and boys basketball coach. He also coached boys and girls high school basketball for a year. In 1967, he became head football coach in Chandler. His track team won two state championships and one state runner-up title and was named an All State Football Coach in 1972. In 1972 he took the head football coaching position at Seminole. Through 8 seasons his record was 63-26-1 including the state championship in 1977.

After a stint in private business, he returned to coaching and ended his career at Westmoore where he was the first football coach when the school opened in 1987. There he had a record of 39-34 which included an overtime loss in the Class 5A State Championship in 1992. 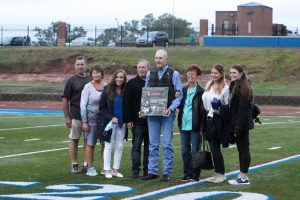 Joe Tytanic was a 1966 Graduate of Choctaw High School. Joe was a three year two way starter for Bill Jensen’s Yellow Jacket. As a senior Joe was selected to the Oklahoma All State, Little All City, and All-District football teams, as an offence lineman. After the All State game Joe was selected to play in the Oil Bowl Game in Wichita Falls Texas, playing the Texas All Stars. Joe was a two way starter in the Oil Bowl game. Joe also was a three year starter for Choctaw’s Wrestling team, at heavy weight. Joe wrestled on the first Competitive wrestling match in Choctaw history. The first match was with U. S. Grant 40-5. Joe pinned his person in 45 seconds and won the first wrestling Bout for Choctaw High School. Joe placed third in the Oklahoma State Wrestling Tournament his Junior and Senior year’s at heavy weight. Joe would like to thank Choctaw High School Athletics for judging me worthy of this honor, I’m honored be a member of all the talented athletes who have been selected. 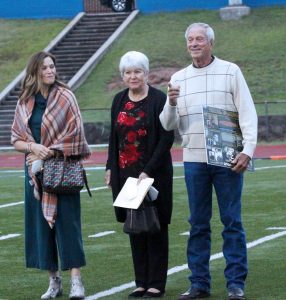