The Carl Albert Titans are Mid-Del Champions once again.

“We knew it’d be a war. Del City is heck of a football team,” Corley sad. “They are going to win a ton of games and be in the mix. [Coach Mike] Dunn and his staff are doing a heck of a job. I am just so proud of our guys for hanging in there and to keep fighting. They showed a lot. I thought those young guys in the back really stepped up and made plays.” 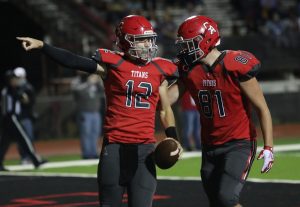 Ben Harris (12) and Charles Fleming (81) celebrate after a touchdown against Del City on Sept. 11. (Photo by Jeff Harrison)

For CA super senior quarterback Ben Harris, the streak started when he was a 14-year-old freshman in his first varsity start four years ago when the Titans pulled out an improbable overtime win over the Eagles.

Friday night showdown between the two highly ranked powerhouses was almost as dramatic. Del City’s vaunted defense was all it was cracked up to be and the running back duo of Jahkobie Smith and LJ Brown stretched Caleb Zangari and the Titan D to the limit.

With the game knotted at 14-all in the fourth period, Nathan Mooney and Keyon Dickerson combined to stack up Brown on third down and force a punt.

The Titans appeared to be headed for the clincher when they fumbled away a sure touchdown on the DC one-yard line.

The Eagles moved it out to the 23 before Mason Still and Corey O’Hagan led a defensive surge that forced a punt and the Titans were 64 yards away from paydirt with a whopping 7:55 left on the clock.

But Harris, now 42-1 in his illustrious CA career, has been there before, with the game hanging in the balance. He connected with Cobe Crews and Gavin Haines for nice gains and tossed in a couple of keepers himself before facing fourth and 4 at the DC 35.

And although Harris had dropped a punt to the 3-inch line earlier, Coach Mike Corley and the Titan Nation knew the boys would be going for it.

Enter Houston Russell, who was Harris’ favorite receiver when they were 8th graders but moved in the quarterback role as a freshman when Harris was called up to the varsity. He has been Ben’s backup ever since, all the while setting the ball securely on the turf as holder for PATs and field goals.

Lifelong friends off the field, the chemistry was there as Harris sought out his long-time buddy and nailed a strike for a 15-yard gain to the 20.

“That was a great throw by Ben [Harris] and a great catch by Houston [Russell],” Corley said. “I just can’t say enough about Houston. He could be a quarterback for anyone in the state and he goes out there at receiver and runs with it and makes big plays.” 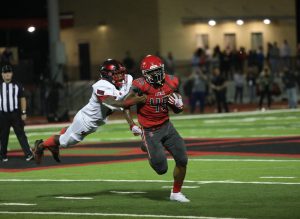 Kentrell Bizzell tries to break free from Del City’s Donovan Stephens during a game on Sept. 11. (Photo by Jeff Harrison)

Four plays later, Kentrell Bizzell bulled his way into the end zone behind a torrid pancake block by Wisdom Combs and his buddies upfront and Russell took the snap from Dax Swanner and plunked it down for Jacob Eddy’s third straight PAT and the Titans were on top, 21-14, but there was still 3:33 left on the clock.

Smith got loose for a 52-yard scamper on the ensuing drive to reach the 22 and three plays later, the Eagles reached the 7 with 47 seconds left on the clock.

No problem for the Front Wall of Dickerson, Zangari, O’Hagan and Still backed by Bizzell and Nathan Mooney. The speed merchants in the secondary, RT Sherman, Ezra Gustafson, Tashawn James, Cobe Crews and Jaxon Holland had limited DC to just 62 yards passing and that’s all they were gonna get.

Three straight passes fell incomplete and when Gustafson slapped down the fourth down heave in the end zone, the 2019 State Champion 2-Oskie Hero led the entire Titan Nation in celebration.

“We just came together as a team and each one of us did our job,” said Dondi King. “And at the end of the day we thank God for the win and the blessings.”

Harris was 18 of 24 for 196 yards and a 20-yard TD toss to Gavin Haines in the first quarter and after Del City took a 14-7 lead in the third quarter, Ben donned his Kyler Murray look-alike suit and darted 20 yards on an option keeper to tie the score before taking over in crunch time to lead the Titans to the city championship for the fourth straight year.