Mark Wright, who has over 40 years of experience in the auto body repair business, says when Oklahoma gets hit by hail storms, out-of-state Paintless Dent Repair (PDR) technicians come to town setting up temporary shops, with little to no oversight.

He says there needs to be a national certification for all PDR technicians, in an effort to better self-police the PDR industry. 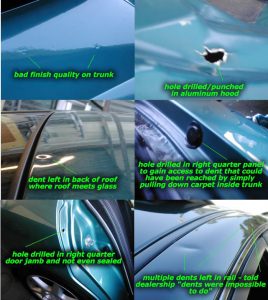 “When we have catastrophes, we have people that pour in from everywhere,” said Wright, who manages an Oklahoma City paint and collision center. “They come in from other states, and set up in any little area they can get in, and proceed to do these cars. They tell customers they will pay the deductible. As soon as they finish your car (which is only 60-70 percent done), they are gone. Because you went around your insurance company, they won’t stand behind it. There is no recourse.”

Wright said he has witnessed and heard plenty of bad PDR experiences from people who have used out-of-state technicians. 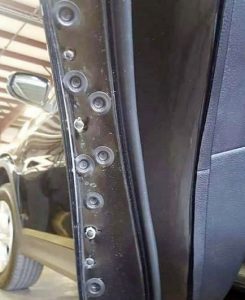 An illustration of several bad PDR that should be avoided.

“There are some really good PDR guys around,” he said. “They stay busy, but they can’t service everything that comes in when you have a big storm hit. I think Technicians need to be certified. You can severely maul a car up (with bad PDR work). You can stretch the metal out where it can’t be repaired without being a total replacement, costing the vehicle owner much more than the original hail damage. It would be better for the consumer and the state if we had certification.”

Wright cited the example of Oklahoma recently enacting certification and registration requirements for hail roofing technicians. He said the hail roofing industry went unregulated for years, allowing out-of-state technicians from all over the country, and doing shoddy work in Oklahoma.

One of the biggest issues representing sub-standard PDR is the technique known as Hole Drilling.  Drilling Holes in the panels of vehicles to give quick access to dents of a vehicle.  This practice is strictly prohibited by insurance companies, but is still a regular standard used by many un-certified PDR Technicians.  When a technician drills many holes into a vehicle panel, it immediately eliminates the safety design and structure of the vehicle.

Wright said there is help on the horizon for national PDR certification.

Vale Training began to operate more than 80 years ago and has been at the forefront of automotive and residential educational innovation. They have trained and certified more than 50,000 industry specialized individuals.

Leading the PDR Testing and Certification organization is its President Anita Dill, a former career Boeing senior test engineer working on the F22 and other strategic military aircraft. She also has a background in 3D imaging and research sciences.

Dill is excited about the opportunity of leading the PDR Certification Program testing operations within the United States.

“The amount of sub-standard work and questionable Paintless Dent Repair Technicians that are out there, just casts a shadow across the industry,” she said. “For me to be able to raise it above and make it a career choice that people can be proud of is one of those invaluable moments. I am looking at this as a difference that I can make across the entire industry to raise the level.”

Vale Training of Texas (valetrainingsolutions.com) is owned by Sedgwick (www.sedgwick.com), the leading insurance claims services company in the world, with its main shareholder being The Carlyle Group.

PDR also known as paintless dent removal, describes a method of removing hail and other dents from the body of a motor vehicle. A wide range of damage can be repaired using PDR as long as the paint surface is intact. PDR may be used on both aluminum and steel panels.

Dill said the PDR industry is the only segment of the auto repair industry in the nation that has not had a national certification standard, but they are working to make that happen.

“PDR industry leaders have been wanting to have a national standard in line with the other auto repair services industries,” she said. “They (industry) went to Vale and asked if they could design a test (for it).”

The Vale PDR Certification Testing is a timed evaluation of actual Paintless Dent Repairs on steel and aluminum panels using a state-of-the-art, digital-optical surface measurement device.This test is totally unique to the industry as a purely objective, hands-on demonstration of a Technicians skill. Timed repairs must pass a very high standard, with a small tolerance to qualify the technician for certification.

Dill said her organization, PDR Testing and Certification, has state-of-the-art testing equipment, and will begin bringing technicians from across the United States and around the world to be certified in the industry of Paintless Dent Repair right here in Oklahoma.

“We are the only private company that owns this type of equipment in the United States,” she said. “The device we use for testing PDR Technicians is used by Ford, GM, Volkswagen, Honda and Tesla to name a few. These companies use it to benchmark the metals and paints used in the manufacture of their vehicles. The device is also used by all the major automotive parts manufacturers and automotive paint companies. We use the technology that the major auto industry leading companies use.”

Dill said their facility in Harrah will also create many new jobs.

“We will be creating an economic impact as a result,” she said.
Dill advises the public to ask if their auto body shop or their PDR Technician is Vale Certified?

Dill wants to hear from Oklahomans who have been affected by bad Paintless Dent Repairs.

They have a link on their website called, “Disappointed with your PDR Repair or Technician?  https://www.pdrtesting.com/tell-your-story-about-pdr/