Hard Luck Automotive Services has been helping those in need with no-cost auto repairs. 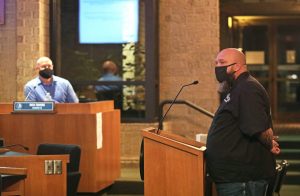 And when the non-profit organization needed a helping hand, they found one in Midwest City.

The city approved a letter of intent with Hard Luck for the land donation at the Sept. 22 meeting. Under the agreement, Hard Luck must pay for construction of the building through donations of cash and in-kind contributions.

Adam Ely, owner of Hard Luck, estimates the new shop will cost about $250,000 to build. He believes the support of Midwest City could spark fundraising efforts.

“With your vote today, we can take that to possible donors and show them that if you want to be treated like a big deal you have to look like one,” Ely said.

Mayor Matt Dukes said he can relate to those customers Ely helps and pledged his support for their effort.

“Your ministry is admirable,” Dukes said. “I can remember growing up and my mom had an old beater car and we had no money and no way to fix it. So that touches a string to my heart. I can see no reason we shouldn’t approve this.”

Hard Luck Automotive Services is a non-profit organization whose mission since 2017 is repairing cars and trucks for those who do not have the means to fix them on their own. The auto shop offers free labor and the customer is responsible for the cost of all parts.

“We try to help those economically challenged with auto repairs for as cheap as possible,” Ely said.

The non-profit is owned and operated by veterans. Ely is a U.S. Army veteran who served in Iraq and Afghanistan. He works alongside two retired military officers Monte Huffman and his wife Toni who served in the U.S. Air Guard.

Hard Luck has gained national media attention for its one-of-a-kind services and inspired similar efforts across the country. Among those fans was TV personality Mike Rowe. The host of Dirty Jobs featured Hard Luck Auto on his web series “Returning the Favor” and donated a shop for two years and supplies for the effort. The lease was valued at $52,000 plus $4,000 for utilities.

Hard Luck has been operating out of that building at 616 SW 29th St., just south of downtown Oklahoma City.  The two-year lease expires in April and Ely said they can’t afford the rent while still charging customers nothing.

“We are frantically looking for our forever home,” Ely said.

Ely was looking to move the business closer to his home in Choctaw and believed the Soldier Creek Industrial Park would be a good fit for his crew. He thanked Robert Coleman, economic development director, for his support in the process.

“Mr. Coleman has absolutely spearheaded this entire process and made us look like rock stars,” Ely said.

The Hard Luck crew is currently raising money for the new facility. Ely said they are hosting a poker and corn hole tournament, selling raffle tickets for a motorcycle and selling t-shirts and hats.

“Having the city behind us means so much more when we go to donors in a pandemic and during an election year,” he said.

Ely said they hope to have the “ball rolling” on the new place before their current lease expires. He said other auto shops have offered to provide space to store their tools and equipment until the new location is open.

“We usually work outside now anyway,” he said.