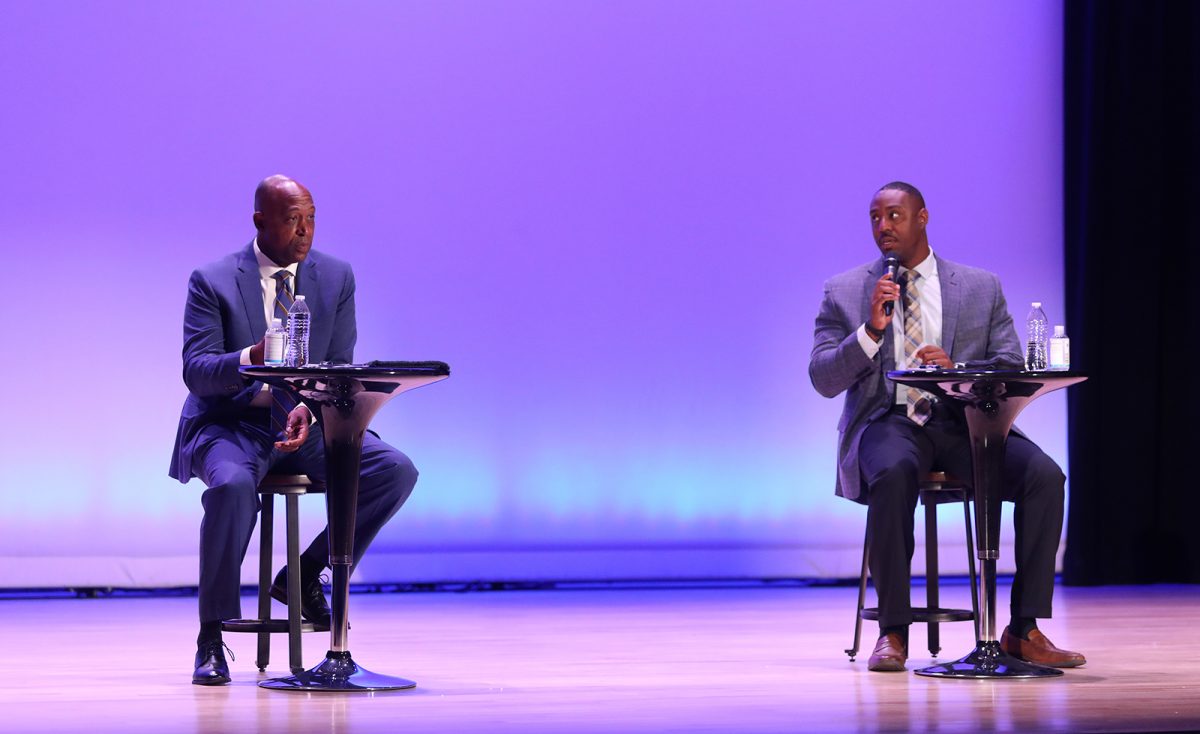 Candidates for Oklahoma County Sheriff meet in a debate at The Auditorium at The Douglass on Oct. 22. The event was hosted by Non-Doc and News 9. (Photo by Jeff Harrison)

OKLAHOMA CITY – Candidates for Oklahoma County Sheriff squared off last Thursday night in a debate at The Auditorium at The Douglass. The event was hosted by NonDoc and News 9.

Cubit is a 24-year veteran of the Oklahoma City Police Department. He has held numerous positions within the department and developed a youth outreach program that focuses on mentorship, building character and empowering at-risk youth, which he said ultimately helped reduce juvenile delinquency and involvement with the criminal justice system. 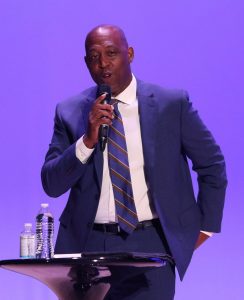 “I have spent time doing the work, leading people, managing resources, and building community trust,” he said. “I have done that. And how do you know I will do it? It’s because I have been doing it.”

Johnson began his law enforcement career with the University of Oklahoma Police Department and joined the Norman Police Department in 2015. Johnson said he has served on the hiring board, bargaining committee and uniform committee, in addition to earning the department’s lifesaving award.

“Our communities are crying out,” Johnson said. “We need better leadership and a fresh perspective. Let’s not go back in the past and do the same things the same way we’ve always done.”

Oklahoma County voters will select one of them as the next sheriff on Nov. 3.

During the debate, Johnson said his top priority would be to add body cameras for officers.

“The top priority for the Oklahoma County sheriff is to get body cams,” Johnson said. “The ability to have evidence that is directly reflective of everything that happens on scene is of the upmost importance and body cams are something that I feel are the most important thing. It outrages me that the deputies of the department don’t have them.”

Johnson said it would take about $150,000 to start the program and $65,000 annually to maintain it. He said that cost could be paid for with donations. Cubit disagreed with the costs and reliance on donations.

“Those numbers are way off because he’s never managed a body camera program,” Cubit said. “He’s never investigated a use of force from a body camera or anything of that nature. Supervisors do that.” 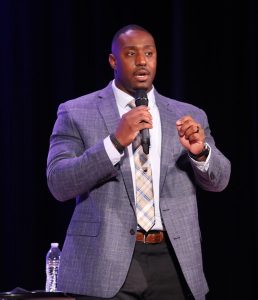 Cubit said the top priority for the department is building trust with the community. He said body cameras would be part of it along with transparency and accountability. When asked about the cost of body cameras, Cubit said he was not sure.

“We have to do the numbers and do the math,” he said. “There is a very basic way that we get to a number to figure out what we need.”

Johnson said that while Cubit has more experience than him, he lacks concrete plans for running the sheriff’s office.

“I took it upon myself to do the research for myself so I can come out here and give you sound knowledge, facts and figures,” Johnson said. “You ask him a question and he speaks in generalities.”

“I hate to quote Mike Tyson, but everyone has a plan until they get hit in the mouth,” Cubit said. “…I’ve had plans that have failed, that I’ve had to re-adapt. I have been in the decision-making seat where I’ve had ideas that didn’t quite go the way I planned. I respect that he has ideas, but what we have to recognize is he’s never done it.”

ICE at the jail

The candidates disagreed about the presence of the Immigration Customs and Enforcement or ICE at the Oklahoma County Jail.

“A lot of people will get confused and say this is a racial issue, but it is not. We have immigrants of all nationalities that move to our country to explore the opportunities that our great nation has. But ICE being in the jail offers us the ability to put public safety as the top priority. It gives us the ability to have knowledge, insight and lets us know who is in our nation. Who is in our county.”

Cubit said he opposes allowing ICE agents at the jail.

“No, they should not be physically in our jail,” Cubit said. “We have the technology that allows us to cooperate with our immigration laws without them physically being in the jail.”

Cubit said he has seen negatives of having ICE agents in the jail.

“I’ve conducted a number of investigations where members of our community are afraid to cooperate with local police because they believe we are operating as agents of immigration,” Cubit said. “When those people do not communicate with law enforcement and tell us when they witness a crime or when they are victims of crimes. That hinders our investigations… It makes all of us less safe.”

Both candidates said they support the decision to create the Oklahoma County Jail Trust and both expressed a need for increased funding for the sheriff’s office.

Cubit said the department is underfunded due to the size of the county. He also expressed a need to increase pay for officers.

“The entire agency is not adequately funded, and I don’t know why,” he said. “We’ll push that on past leadership or the budget board. We have roughly a $10 million budget for 700 square miles and about 150 employees, and about 150 of those miles are unincorporated. Just for manpower alone, we don’t have enough money to give the kind of service that I feel like the people of Oklahoma County deserve.”

Johnson agreed with the need for more money for officers.

“It’s not adequately funded,” he said. “I do appreciate Mr. Cubit for touching on things that I’ve been expressing my whole campaign. I have said that we don’t have adequate officer pay. And the situation at the Oklahoma County Sheriff’s Office is we are hiring good men and women, and we’re training them, we’re putting them on the street and then they’re leaving for a department with a more livable wage. And you cannot fault them for it.”

Cubit said racism exists in America as a whole but believes local law enforcement do a good job of rooting it out.

Cubit said would like to evaluate the county’s policies and programs and improve transparency.

Johnson disagreed, saying that diversity is the best way to combat racism.

“I don’t feel like there is systemic racism within a police department, but the one thing that police departments and every agency around the country can do better is to become more diverse,” he said. “I truly believe that if we make our agencies resemble the communities that we serve that solves a lot of issues.”

Both candidates also criticized calls to “defund the police” and said they need more resources.