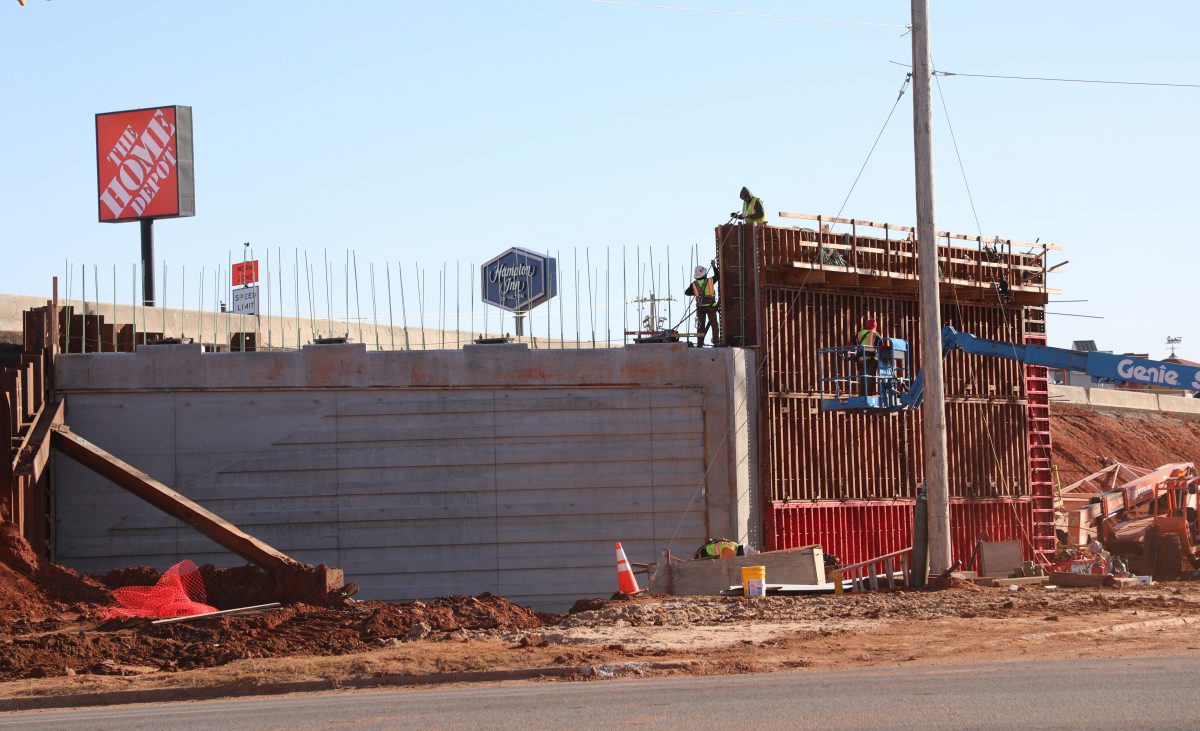 Crews work on building a new I-40 bridge over Sooner Road in Midwest City and Del City. The bridge is part of an $80 million project reconstruct bridges
over Crutcho Creek, SE 15th St. and Sooner Rd. (Photo by Jeff Harrison)

One of the most expensive road projects in state history is underway in eastern Oklahoma County.

And plenty more are on the way.

ODOT releases an updated plan every year that includes new projects and changes to others. This year’s includes more than $6 billion worth of construction and 1,350 total projects.

Of those projects, 11 are scheduled for eastern Oklahoma County with the majority taking place along Interstate 40 between Del City and the Pottawatomie County line. And most have been included in previous years of the plan.

Two new local bridge projects were added to the list.

Lisa Shearer-Salim, public information manager for ODOT, said the designs were already in place for both projects which allowed them to be added to the new 8-Year-Plan.

“Both of these have been on the radar for a while,” Shearer-Salim said.

The first local projects in the plan are scheduled for 2025. ODOT proposes to reconstruct the I-40 and Douglas Boulevard interchange and widen I-40 between Luther Rd. to Harrah-Newalla Rd. The Douglas Blvd. interchange will cost about $32 million and includes removal of the Engle Rd. bridge. The I-40 widening project is expected to cost $33 million and it was moved up one year in the plan.

In 2026, ODOT plans to reconstruct the I-40 bridges over Sunnylane Rd. in Del City, as well as rehabilitate the US-62 bridge near Choctaw Rd. in Choctaw.

In 2027, work will continue east on I-40. ODOT plans to widen and reconstruct I-40 between Douglas Blvd. and the I-240 junction. It will include raising the Westminster Rd. bridge to allow for improved vertical clearance and reconstructing the Anderson Rd. bridge and I-240 westbound ramp. Projects to rehabilitate the pavement on I-240 between I-35 and S. Air Depot Blvd., and add pavement overlay on I-35 between the Fort Smith junctions and I-44 are also in the plan.

In 2028 – the new year added to the plan – ODOT has scheduled projects to reconstruct the I-40 bridges over S.E. 29th St. in Midwest City and Scott St. in Del City. The Scott St. project was pushed back from 2026.

“The I-40 and Scott St. project is in the very preliminary design plan stage, so it made sense to move it back in the plan to give more time for that process to continue,” said Shearer-Salim. “Once plans are ready, it potentially could move back up in the plan during the next rebalancing.”

ODOT officials said this new update considers an upcoming reduction in state funding which was done through previous legislative action to help balance the state budget and project schedules have been adjusted accordingly.

“These are challenging times, and we appreciate the support by legislators and Governor Stitt in recognizing that a good transportation infrastructure is a critical component in driving Oklahoma’s economy,” Oklahoma Secretary of Transportation and ODOT Executive Director Tim Gatz said in a press release. “We looked for innovative ways to keep our plans fiscally responsible and progressing with the focus on maintaining good bridges and improving pavement conditions in our state.”