For the first time in a month, the Carl Albert swimmers were back in action.

And for the first time this season, they did so at their home pool.

Carl Albert beat Ft. Gibson Friday in a senior night dual meet at the Rose State Aquatics Center. The boys won 543-355 and the girls were 553-461 winners. 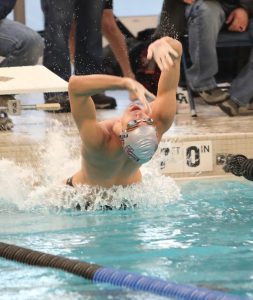 The Carl Albert boys were dominant, wining all but one event. They racked up big points with a sweep of the relays.

Kaleb Putman, Brian Lam, Dylan Garcia and Mason Hamilton started the night off with a first-place swim in the 200 medley relay in 2:07.36. Putman and Lam joined Jack Flosi and Max Wolfley to win the 200 freestyle with a time of 1:47.85. The Titans closed out the night with a win in the 400 freestyle relay. Garcia, Flosi, Wolfley and Hamilton won in 4:22.45.

Putman and Wolfley were the top individual swimmers with two victories each. Putman took first in the 200 freestyle (2:06.72) and 100 backstroke (1:02.92). Wolfley showed his mastery of the freestyle, winning the 50 and 100 varieties.

Colin Martin claimed Ft. Gibson’s only win in the 100 butterfly.

Senior Molly Woodruff led the way with a pair of victories in the 200-meter individual medley and 100 breaststroke.

Haylee Schapp led Ft. Gibson with a pair of individual wins in the 100 backstroke and 100 butterfly.

Carl Albert will travel to Duncan on Friday.