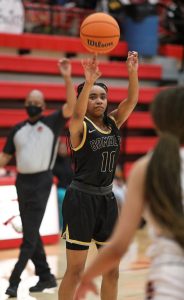 Midwest City’s Myracle Washington shoots a 3-pointer during a game against Del City on Jan. 19. (Photo by Jeff Harrison)

As usual, the Midwest City girls were rock solid on defense.

But their offense needed a jumpstart last Tuesday night against rival Del City.

And Myracle Washington proved to be the cure to their offensive woes.

The sophomore caught fire from the outside in the second half, knocking down five 3-pointers to lead the Bombers to a 62-39 win at the John Smith Fieldhouse.

“I knew we would win tonight, and it just felt really good to contribute,” she said.

Midwest City led 25-19 at halftime, but Del City kept things close in the third quarter. Sykes hit a pair of free throws to cut the deficit to 33-29.

The Bombers responded with a 13-1 run to close out the quarter. Washington and Latasha Mitchell each hit a couple of 3-pointers, giving Midwest City a 46-30 lead after three.

Washington continued to light up the scoreboard with three more treys in the fourth. With 30 seconds remaining, she launched her final one for the 62-39 win.

“We just weren’t really ready to go from the beginning of the game and didn’t have the confidence after missing some easy shots that we normally hit,” said Midwest City coach Megan Maloy. “At halftime we talked about slowing it down and working the ball inside out, and that’s what we were able to do. Myracle Washington had a big night for us.”