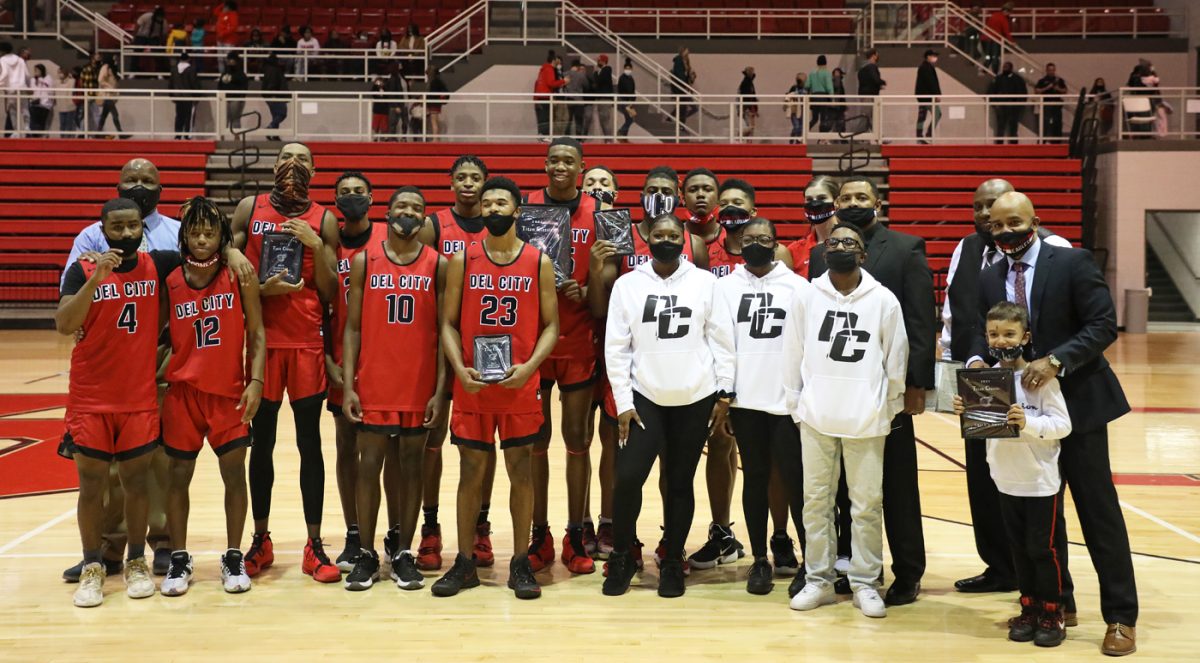 Tournament MVP Keyondre Young scored 25, including the bucket that sent the contest into overtime then tacked on six more points in the extra period as the Del City Eagles claimed the championship of the Titan Classic, defeating host Carl Albert, 53-47, in a rousing finals game Saturday night.

It was the sixth straight win for the No. 7 ranked Eagles and upped their season mark to 11-4. 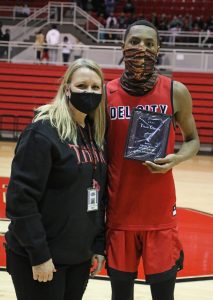 Young was practically unstoppable for the Eagles, connecting inside on a follow shot with 13 seconds left in regulation to knot the score at 43-all and send the contest into overtime.

Young then delivered a traditional three-point play, downed another free throw, then following a bucket by Sherrod Davis, Young sank two free throws to put the contest out of reach and signal a wild celebration by the huge DC contingent.

“Those Carl Albert seniors are hard to beat. They don’t lose very often on their home floor,” said Del City coach Lenny Hatchett. “I was proud of our guys for just grinding it out. Keyondre (Young) kind of put us on his back and made some big plays.”

Javeon McCallister added 10 points for the Eagles and Terry McMorris had 8 points while Sherrod Davis contributed 6.

Young’s two free throws at the buzzer tied the contest, 20-20, at halftime and McMorris had a traditional three-point play to put the DC boys on top going into the final quarter and the stage for the dramatic finish.

MIDWAY THROUGH the final quarter, the chant came tumbling down from the Del City student section.

“Over-rated!!!” they chanted as their beloved Eagles surged to a 20-point lead over No. 1 ranked Edmond North in the semifinals of the annual Carl Albert Titan Class Friday night.

When the 62-40 beat-down was finally complete, the Eagles of Lenny Hatchett were again in the finals of the prestigious tourney and again will face host Carl Albert for the championship.

It didn’t take long for the Eagles to take control. A trey by Keyondre Young and a field goal by Sherrod Davis set the stage for a slam by Brandon Garrison and a 9-7 lead that the DC boys would never squander.

Young had a pair of treys and a field goal and Davis had a pair of in-close buckets for a 17-9 advantage after the first quarter. By halftime, the lead had grown to 29-21 as Young and Damarious Vealey each had five the second period for a 29-21 lead.

The Eagles clamped down on defense in the third period, holding the explosive Husky attack to just six points while increasing their lead to 45-27. Javeon McCalister led the offense with two field goals and two free throws in the period.

Bryan Couch connected on the final two field goals of the game to create the largest point difference.  Young took scoring honors with 21 points while Davis added 10 and McCallister added 8.

The Eagles scored 10 points in a row during a stretch midway through the second period and went on to defeat Ponca City, 79-50, in first round action of the Titan Classic.

The Eagles, fresh from a stirring victory over Mid-Del rival Midwest City, got three field goals from Brandon Garrison but led only 17-13 going into the second period. The were up only 21-15 when Jaedon Freeman connected on a field goal, Javeon McCalister sank two free throws, Terry McMorris had a field goal and two free throws and Ladarious Crutchfield capped the spurt with a trey and when Garrison beat the halftime buzzer with a follow shot, the Eagles wee on top, 36-21, and were never headed.

Keyondre Young, who led the Eagles with 17 points, scored nine of them on three field goals and a trey, in the third period to help push the lead higher. Percy Green had three field goals in the final period as the reserves kept the pressure on the Wildcats.

In addition to Young’s 17-point harvest, Garrison added 10, Sherrod Davis had 9 and McCalister and Freeman each had 8 for the Eagles.