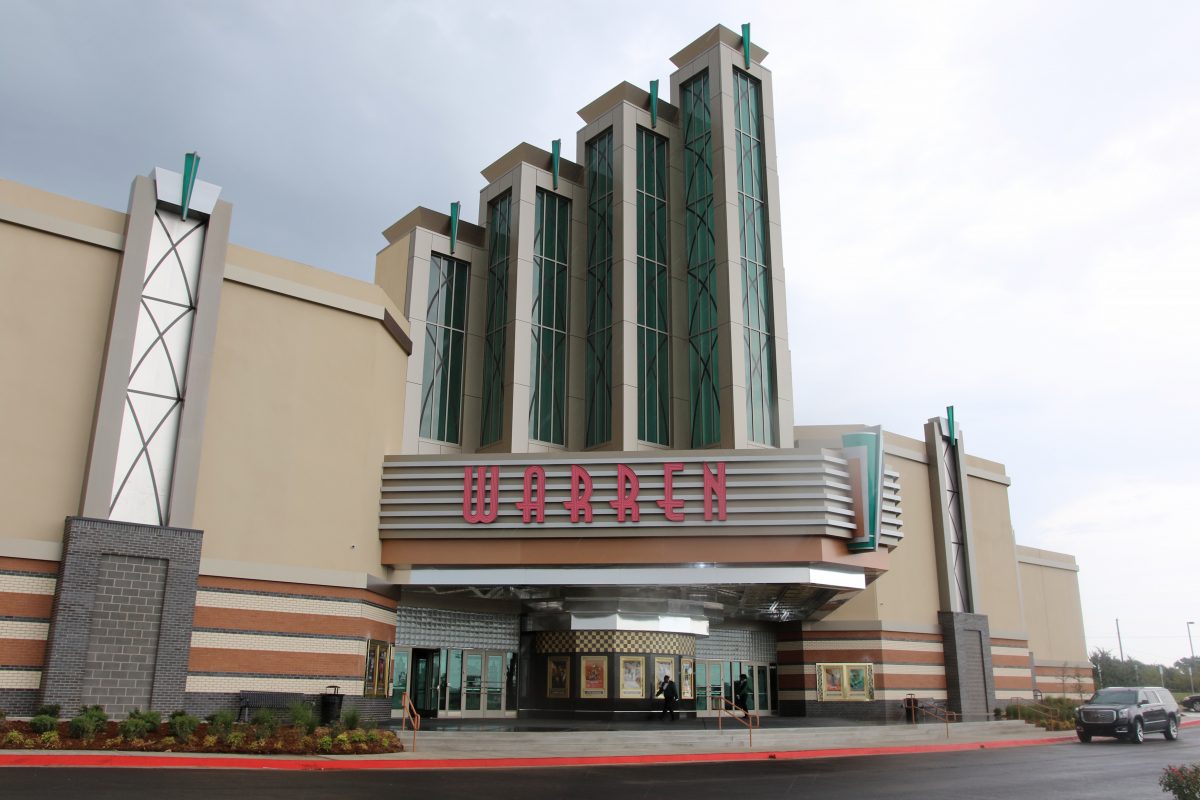 Arvest Bank foreclosed on the Warren Theatre in Midwest City due unpaid debts and liens on the property which opened in August 2019. (File photo)

Arvest plans to see property through Sheriff’s Sale next month

The Midwest City Warren Theatre has been foreclosed on and the future of the cinema complex is still unclear.

The foreclosure lawsuit filed by Arvest Bank against MWC Warren Theatre, Inc. seeking more than $16 million was filed in August.

The lawsuit alleged that MWC Warren Theatre took out a $14 million mortgage for construction of the theatre and a $3.5 million loan for equipment in February 2019 and has failed to make payments since May.

The judge agreed with Arvest Bank’s request for payment of the loans as well as possession of the theatre property. The bank is permitted to sell the property directly or through the Oklahoma County Sheriff’s Office.

Midwest City officials believe the theatre will be showing movies again in the near future.

“We are very confident 5905 SE 15th St. (Warren Theatre) will reopen as the fabulous movie theatre we all came to love,” said Robert Coleman, economic development director for Midwest City. “The equipment is state of the art, and the building itself is the newest of its kind in Oklahoma.  It seems farfetched to think anyone with other intentions would be interested in purchasing the building.”

Coleman expects the theatre property as well as three parcels along SE 15th St. will go to a Sheriff’s sale before the end of March.

“We expect a judge to confirm the sale at a hearing two or three weeks later, which would put the property in the hands of the new owners perhaps as early as April 2021,” Coleman said.

“There is significant interest in this property. The theatre is brand-new, has state-of-the-art equipment and is in the middle of an exciting entertainment district,” the statement read.

Other subcontractors have also filed liens against Warren, totaling more than $176,000.

Key Construction sued Warren for breach of contract in Oklahoma County District Court on Aug. 25, one day before Arvest filed its foreclosure request. The company is seeking payment of $1,062,622.12 which it says is the “reasonable value of such work.”

According to the court ruling, Arvest’s liens take priority over Key and others, except for unpaid property taxes and assessments owed to Oklahoma County.

Midwest City Warren Theatre opened for business Aug. 23, 2019.  It was open for about 7 months before closing in March due to COVID-19.

The Warren Theatre is the centerpiece of the Sooner Rose Shopping Center development near SE 15th St. and Sooner Rd. The development includes retail, restaurants, and an indoor entertainment complex. The 10-screen theatre features a new concept that owner Bill Warren described as “smaller but more luxurious” than others he’s built.

At the time, Warren operated theaters in Moore and Broken Arrow as well as Kansas and Missouri. The company later sold all of its other theaters, except the Midwest City location.

The city created a Tax Incremental Finance or TIF District for property around the shopping center. Sales and use taxes generated within the geographical area will be used to pay back loans for purchasing land and improvements.

Construction of the theatre began in early 2018 and was originally slated to be complete by Christmas. Crews ran into several issues with the site early in the process. The city had relocated utility lines that ran through the property and removed several old underground fuel tanks.

Coleman remains optimistic about the future of the movie theatre and entire Sooner Rose Shopping Center. The commercial area has seen several new restaurants open in the past year with more on the way.

“There is so much pent-up demand due to the pandemic, and we feel the need for families to get out of the house will pay huge dividends for the entertainment operators who are ready to go this summer,” he said.

He does not believe the city will play a role in attracting a new tenant for the theatre.

“City personnel invested a lot of time in bringing this project to fruition, and the Midwest City Memorial Hospital Authority invested a lot money in it,” he said. “It is difficult to see a situation where we would commit additional resources as we would prefer the private sector take it from here.”

Attempts to reach attorneys for Warren Theatre were unsuccessful.