The Midwest City Warren Theatre is scheduled for a sheriff’s sale on March 18. 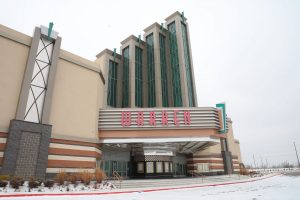 The Midwest City Warren Theatre will be auctioned off at a sheriff’s sale on March 18. (Photo by Jeff Harrison)

A foreclosure of the movie theatre was filed in August 2020, stating that MWC Warren Theatre, Inc. defaulted on more than $17 million in loans owed to Arvest Bank, according to court records.

The Midwest City Warren Theatre opened in August 2019 and closed seven months later due to the coronavirus.

An Oklahoma County judge ruled in Arvest’s favor at Jan. 22 hearing. The judge permitted the bank to take possession of the property and sell it to pay off the note. Proceeds from the sale will also be used for any unpaid taxes.

Key Construction, which oversaw construction of the movie theatre, also sued Warren Theatre for breach of contract, saying they are owed more than $1 million for unpaid labor and materials. Other subcontractors also filed liens against Warren, totaling more than $176,000.

The judge ruled that Arvest Bank’s liens take priority over others, except for unpaid property taxes and assessments owed to Oklahoma County.

The movie theatre property as well as three parcels in the Sooner Rose Shopping Center will be included in the auction. Olive Garden is located on one of the parcels through a ground lease. The two others are undeveloped.

“We are very confident 5905 SE 15th St. (Warren Theatre) will reopen as the fabulous movie theater we all came to love,” Coleman said. “The equipment is state of the art, and the building itself is the newest of its kind in Oklahoma.  It seems farfetched to think anyone would other intentions would be interested in purchasing the building.”